Tell Me Who We Were: Stories

This impressionistic, linked collection is no beach read. 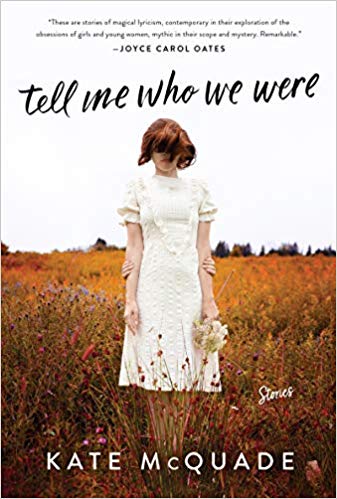 In early August, a copy of Tell Me Who We Were by Kate McQuade is delivered to my front porch. Enclosed with it is a press release from William Morrow that glows with critical acclaim. One author quoted is Joyce Carol Oates, who praises the “magical lyricism” of McQuade’s stories and suggests they are “remarkable.” I am excited.

After all, summer is the best time to receive books because the warm weather beguiles one to read and relax. Perfect. I open the pages on the front porch swing, serenaded by cicadas encamped in the woods’ edges surrounding my farmhouse, and I begin to read. Less than a week later, I arrive at the last page. Then I close the book in frustration.

My lack of understanding reduces me to student status, inadequate to translate literature that is not immediately clear. I recall a college course decades ago on William Faulkner taught by a renowned scholar. When I couldn’t understand the vagaries of Faulkner’s characters, their peculiarities, and bizarre statements (“My mother is a fish,” by the child Vardaman in As I Lay Dying, for example), the professor interpreted the meaning for me.

When, in graduate school, I confronted Kafka’s first sentence in The Metamorphosis: “As Gregor Samsa awoke one morning from disturbing dreams, he found himself transformed in his bed into an enormous cockroach,” a rousing class discussion suggested reasons that somewhat made sense.

But that was then.

Now, I found myself with a volume of stylistic prose lauded by those who recognized something I did not. I turned back to McQuade’s first chapter for a second look. Tell Me Who We Were is by a celebrated young author in Massachusetts who teaches at Andover College and writes about the “obsessions of girls and young women, mythic in their scope and mystery.” I read again the quote from Joyce Carol Oates.

Also, I review glorious press release phrases to advance this book: “Kate McQuade is one the most exciting writers I’ve read in years,” claims Anne Valente, author of Our Hearts Will Burn Us Down. David Huddle, author of The Story of a Million Years, calls it, “the most refreshing work of contemporary literature I’ve read in years.”

Clearly, I am missing something. But those who praise the book drop clues. Huddle says, “The roots of this book are in ancient literature, but its spirit is stirring Twenty-first Century. A virtuoso performance!”

McQuade herself confesses her determination to include within the collection “a loose adaptation of an ancient myth or parable that included a problematic woman.” She adds, “This wasn’t hard; it turns out a lot of myths are about problematic women.”

Intrigued, I do a quick scan of mythology about such women, including the biblical Eve, Helen of Troy, the Sirens, and other female subjects of ancient tales. Afterward, I re-read McQuade’s book to understand it on my own terms.

Then, insight strikes: I have been reading this debut literary fiction the way I've read other contemporary books, all too often characterized by what I call “run and done”; that is, a speeding pace, a disregard for taste, characters with the substance of Jell-O, and a lack of imaginative, lovely prose. McQuade’s book offers none of those things. It is an art form in its own right, combining ancient cultural prototypes with modern settings written poetically.

These stories tell — from various points in time — of six teenage girls who witness the discovery of a body drowned in a school pond. The naked cadaver is that of a favorite male teacher, young, handsome, and intellectual. The macabre impression lingers, recurring in their later lives as they struggle with the developmental obsessions, difficulties, and bewilderment of growing up.

McQuade tells the eight linked stories from different points of view and at varying character ages. Her prose is symbolic and, at times, mysterious. She uses language in novel ways.

This book prompts me to define it by what it is not. It is not a story to rush. It’s not chick lit. It’s not a beach read. Not a whodunit. Not necessarily a book that’s easy to understand the first time through.

This is a slim volume to ponder, full of writing to savor, to glean meaning from. It is the evocation of universal memory, imagination, and emotion — prose that is at once lyrical and deep, telling stories in a language and style that is uniquely McQuade’s.