Tears Over Russia: A Search for Family and the Legacy of Ukraine’s Pogroms

The horrors playing out today have deep roots in the past. 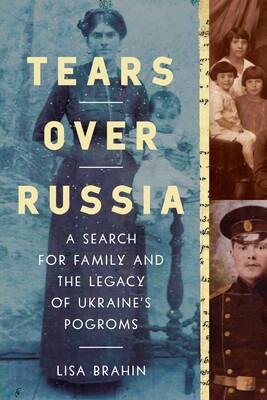 A 9-year-old witnesses his friend shot between the eyes. A woman is gang raped in the street. An elderly man is branded with a hot iron. This was Ukraine in 1919. While the world has been aware of the unfolding humanitarian and geopolitical crisis there since the Russian invasion in February 2022, such tumult has been familiar to Ukrainians, with only brief respite, for most of the last century.

Caught in the crossroads between the Russian and Ottoman empires in the late 19th and early 20th centuries, Ukraine was subject to invasion, occupation, civil war, and famine. Its territory was fought over at various times by Russia and Poland, and its inhabitants were frequently terrorized by warring factions. None suffered more than the Jews.

The pogroms in Ukraine between 1917 and 1921, which killed an estimated 100,000 to 250,000 Jews, are the backdrop for Tears Over Russia. The book shines a light on this dark period through the story of one extended family, the Caproves. It is a story of loss and desperation but ultimately of hope and renewal. The work is a result of the genealogical research that’s so popular today and demonstrates what it can contribute to historical studies.

Author Lisa Brahin was intrigued by her grandmother’s stories of life in Stavishche, Russia (which became part of Ukraine), and the family’s subsequent escape to the U.S. in 1920. Her meticulous research through archives, libraries, and institutions and numerous interviews assisted by skilled translators produced the narrative that fills in the gaps of her grandmother’s tales and provides us with insight into the uprooted lives.

The narrative focuses on Channa Caprove, Brahin’s grandmother, and includes Channa’s father and mother, Isaac and Rebecca Cutler Caprove; her siblings, Sunny and Beryl; and her Caprove and Cutler relatives, as well as family friends. Brahin describes their life in Stavishche prior to the Russian Revolution of 1917 as “days of innocence.”

Christians and Jews lived for the most part peacefully side by side on crooked streets lined with houses made of clay floors and straw roofs. Jewish merchants and artisans plied their wares in shops or made deliveries with wooden handcarts. Children ran about freely. Religious holidays and market fairs punctuated the calendar. The town’s wealthy patron, the count of Stavishche, contributed to the welfare of orphans and widows and opened his estate’s gardens for the public to enjoy.

All that changed with the mayhem unleashed by the Russian Revolution. Despite the relative peace in Stavishche, antisemitism had long plagued Russian and Ukrainian Jews. The revolution shattered the serene veneer of the town, leaving Jews exposed to violence from peasant mobs, Russian nationalists fighting the Bolsheviks, and bandits who took advantage of the chaos.

Families hid in cellars and fled into the woods with their children while mobs ransacked their homes, stole from their businesses, and burned their town. Those who did not escape were brutalized. Many experienced this terror multiple times, moving to other villages only to have the nightmare repeated. The atrocities Brahin details are arresting, all the more so because of the intimacy of the narrative: There is a direct line from the long-ago victims to the present via the author.

Heroism and hope managed to endure despite the hardship. Brahin recounts the bravery of a local rabbi who stood up to the leader of a group of thugs to protect his congregation. Another hero was a young Stavishche native who had emigrated to the U.S. and served in the army during World War I. He returned to lead 80 of his relatives and their friends out of Ukraine at the height of the pogroms.

Their journey from Ukraine across the Dniester River into Romania is echoed in migration stories to this day. Some were lucky enough to have U.S. passports obtained by relatives who preceded them. Others needed to wait for proper documents. Many worried that, after crossing the Atlantic, they would be barred from entering America because of health or other issues. Those who made it started new, productive lives in the West, no doubt haunted by what they had witnessed.

Brahin does well in placing the Caproves’ story within the history of the period, but the record is often more complex than one family’s saga. Her description of Bolshevik troops, for example, rescuing Jewish townspeople from marauding bandits is a bit misleading. While there is no reason to doubt the incidents she describes are true, the larger historical record shows that the Bolsheviks were no less prone to antisemitism than their nationalist rivals.

The book includes wonderful glossy pictures of key figures in the narrative and useful appendices with lists of both survivors and victims of the pogroms. The glossary is helpful for the Hebrew words it defines but is missing others that readers may not know. The layout of the endnotes is clear and easy to read, but there are bewildering duplicate references in places, first in footnotes and then in endnotes. And some chapters have two sections of endnotes. The addition of a map and a family tree would’ve enhanced the book.

These criticisms are more of form, however, than substance. Overall, Tears Over Russia is illuminating, well researched, and thoroughly sourced. It will be a boon for genealogists of Jewish ancestry and is a good example of how family lore can be placed in a broader historical context.

The Drunken Botanist: The Plants That Create the World’s Great Drinks

The plants behind your favorite drinks step forward to take a bow.