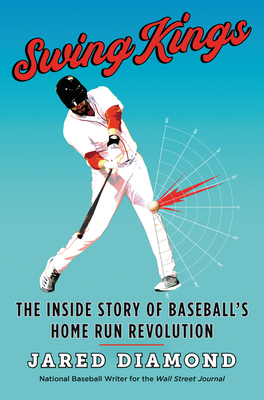 From the title, Swing Kings, readers might think Jared Diamond is writing about Duke Ellington and Benny Goodman. But while there’s music to be found in his subject, he’s actually addressing the basso profundo revolution in baseball: the batter’s swing.

Swinging a bat that actually connects to the ball is considered to be the toughest skill in all of sports, and Swing Kings tells the story of renegades who’ve rolled over conventional coaching to hit home runs, and in the process, have revolutionized Major League Baseball.

The sport has continually changed from the dead-ball era (1899-1920) to the live-ball era (1920‑2020), and one of the more dramatic changes was illustrated in 2003 by Michael Lewis’ Moneyball: The Art of Winning an Unfair Game. In the years since that book was published, followed by the 2011 movie “Moneyball,” starring Brad Pitt, the front offices of MLB have been filled with executives who’ve adopted the statistical-analytics approach to baseball (“sabermetrics”) to evaluate players and have become known as the Moneyball Generation.

Now comes a new generation of “swing kings,” who’re homering into history by throwing away the old traditions of staying back on the ball and hitting to the ground. Instead, serious hitters are switching up their stance, redirecting the bat path, and aiming for the sky, all anathema to old-school teaching. Diamond documents this revolution in detail (punishing detail for non-obsessives), and his book arrives at a most propitious time: in the midst of a global pandemic.

Normally, being published during a national lockdown would be an author’s worst nightmare — no book tour, no signings, no buzz — and, for a Wall Street Journal sportswriter like Diamond, no baseball. But there might be a silver lining because his audience is avid. They are fans who’ve been forced into their bunkers and won’t see opening day until possibly Fourth of July weekend, and then only on television.

Gallup’s most recent poll shows that more than 60 percent of Americans are sports fans, so Diamond’s publisher is banking on their need to read something beyond BaseballAnalysts.com, BaseballDebate.com, BatSpeed.com, SetPro.com, and TheHittingVault.com.

Since 2017, home runs have dominated the sport, and that’s because some players finally stopped listening to hidebound batting coaches who continue, as Diamond writes, to teach batters to “stay back, swing down, bring your knob on a straight line to the ball, be short and quick, and ‘squish the bug’ — the oft-cited cue to a hitter to rotate his back foot upon swinging, as if he were smooshing an ant.”

Diamond acknowledges the rapture of home runs, an attraction in baseball from its beginning. “The ability to drive the ball far, to send it soaring high into the sky, was sexy. It was exciting. It was a sign of immense strength and power, of great masculinity and virility.” Then, just as he was rounding the bases with home-run prose, he stubs his sexist toe: “Even back then, chicks dug the long ball.”

In the 2000s, desperate players who needed to up or resurrect their game started making secret pilgrimages to the California batting cage of Craig Wallenbrock, “the Oracle of Santa Clarita.” Wallenbrock preached a radical gospel of “lag position” in swinging, which Diamond chronicles pitch by pitch and player by player.

As one example, after two years with “the Oracle,” the Houston Astros’ J.D. Martinez learned to swing in a way that defied all conventional wisdom and raised him from baseball’s reject bin to the Boston Red Sox for a five-year contract worth $110 million, guaranteed.

Wallenbrock worked with Doug Latta in the Ball Yard, a training facility that Latta owned in Chatsworth, California, which became a mecca for serious hitters eager to explore new ideas. Together, Wallenbrock and Latta became to baseball what Jobs and Wozniak were to technology.

They were game-changers who busted the baseball brotherhood to produce unorthodox home-run hitters, but like all who challenge the establishment, they were treated like porcupines at a picnic. Now, 20 years later, they’re finally being celebrated as geniuses. The takeaway here for anyone: Follow your passion, challenge convention, be counterintuitive, welcome diversity, and embrace innovation.

Diamond had a dual goal in writing Swing Kings, his first book: to report the home-run revolution within Major League Baseball, and to apply the new swinging principles to his own game. He wanted to wow his colleagues in 2019 when playing in the equivalent of journalism’s World Series, an annual two-game showdown for New York and Boston sportswriters, who play one game at Yankee Stadium and the other at Fenway Park.

As a result, he inserts himself off and on in the narrative, cutting from first person to third, which, unfortunately, makes for a herky-jerky read. But he lays out his report in serviceable style with no prose thrills, leaving the poetry of baseball to Roger Angell. And, by his own admission, Jared Diamond is a sportswriter who covers baseball better than he plays it.

Kitty Kelley is the author of seven number-one New York Times bestseller biographies. She is on the board of Reading Is Fundamental and the Washington Independent Review of Books. Inspired by Jackie Robinson, her favorite number since grade school has been 42.