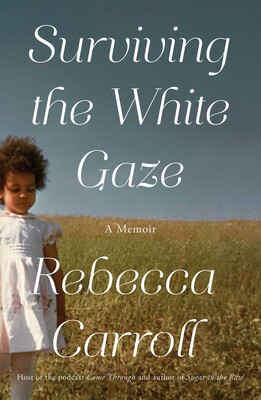 In 1972, the National Association of Black Social Workers (NABSW) issued a position statement that took a “vehement stand against the placement of Black children in white homes for any reason.” The document eloquently and forcefully explains this stance as crucial to the child’s healthy formation of identity in a society intent on the erasure of Blackness.

Around that time, David and Laurette Carroll formally adopt Rebecca, whom they had been raising since infancy. Rebecca is the mixed-race child of Tess, a white high school student of David’s. Uninterested in Black life and culture, the Carrolls were likely unaware of NABSW’s stance. As Rebecca Carroll vividly reveals in her searing memoir, Surviving the White Gaze, her adoptive parents were woefully unprepared to raise a Black child, clueless to the challenges she faced as the only Black resident of their rural New Hampshire town.

Like many progressive people of that era who adopted outside of their race, the Carrolls, who already had two biological children of their own, “believed in Zero Population Growth, and so…didn’t want to bring another child into the world.”

They first thought of adopting a Native American child, no doubt influenced by the Indian Adoption Project, a federal program that was heralded as a beacon of enlightened adoption practices for placing brown babies with white families. But then, 16-year-old Tess offers the Carrolls the opportunity to adopt her baby, fathered by a Black man. As Tess is a friend of the family, the adoption is open.

Rebecca has an idyllic childhood, free to range her commune-like neighborhood of artsy counter-culturists. But there are intimations that all is not well in her household. Her parents have an open marriage, instigated and liberally exercised by her father, modeling an unhealthy dynamic as her mother sacrifices her needs and wants for her husband’s. There is an odd family friend who likes to put his hands all over Rebecca, to no one’s objections. And Rebecca’s hair is an untidy mess of burrs, dry and coarse because no one has showed her how to care for it.

Her Blackness is praised and almost fetishized by her parents, and yet they do nothing to introduce her to Black culture. She’s 6 when she meets her first Black person:

“I studied ballet with Mrs. Rowland for five years, and often in her company, I felt small pangs of fragile awareness regarding who I might be, what my skin color might mean. There were days when I wanted to be, or believed I was, Black just like Mrs. Rowland, but it also seemed as though I would have to give something up in order for that to remain true.”

As Rebecca becomes more aware of the world and her place in it, she begins to absorb the racist sentiments openly directed at her, as when her elementary school teacher tells her she’s pretty “for a black girl”:

“The cognitive dissonance between what my parents and other white adults had told me for the past ten years, and what Mrs. Gordon was now stating in such a self-satisfied, matter-of-fact manner, called up a sense of cruelty that I’d never experienced before…I felt my body shiver as a small cell of trauma began to metastasize.”

This crisis of identity leads Rebecca to seek her first meeting with Tess when she is 11. Tess is beautiful, chatty, and distant. When Rebecca ventures to ask about her father, Tess replies, “Basically, he was a dog…a jive-ass black man who could bullshit like nobody’s business.”

While Carroll capitalizes Black throughout the memoir, the “b” is lowercase when the word comes out of Tess’ mouth, a subtle connotation of her racism, particularly insidious because she can claim familiarity with Black culture. After all, her daughter is Black.

A narcissist, Tess behaves in wildly inappropriate ways with Rebecca, taking her for a night out on the town when she’s only 11, inviting an adult friend to take her virginity, and always, always, defining her daughter’s Blackness for her.

As Rebecca matures, and her world opens up, she encounters more Black people and broadens her understanding of her own identity. At the same time, she must navigate the incessant micro- and macroaggressions of her white community.

She inserts herself into the popular crowd and strives to date cute white boys. Despite her damaged psyche, Rebecca does not lack self-assurance. Though Carroll doesn’t explicitly say so, her beauty, charisma, and intelligence open doors that might have otherwise stayed closed.

She flirts with an eating disorder to meet the white ideal of beauty, hurt that her high school crushes are unable to view her as anything more than a friend. Much of her college and early adulthood is memorialized in a litany of boyfriends and the details of their relationships. While cogently and eloquently exploring how those relationships strengthened or weakened her identity as a Black woman, Carroll doesn’t closely examine her need for these relationships.

As Rebecca begins to find her way as an adult, Tess’ efforts to undermine her become more destructive. She ruins Rebecca’s relationship with her first Black male mentor and incites an accusation of sexual molestation against Rebecca’s adoptive dad. She writes a memoir, seizing control of Rebecca’s narrative to shape it as her own.

When Rebecca finds her birth father, he’s living in poverty and struggling with physical and mental health issues. He tells her, “Tess…took you, just like slave times. I wanted to keep you. I would have raised you on my own, but they shut me out and stole you away from me.” Reunification is difficult and bittersweet.

Carroll’s language toggles between the blinding eloquence of a literary essay and the informal chattiness of a social media post, her fierce sense of self always shining through. A successful writer and cultural critic, a loving wife and proud mother, she achieves the happily-ever-after ending of adoption lore, despite, not because of, her white parents, adoptive and natural.

The NABSW’s 1972 position statement, by the way, still stands.