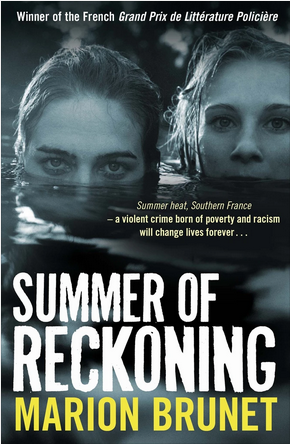 The first pages of Summer of Reckoning are filled with such raw violence that many readers may pause before continuing on. The abuse — physical, verbal, and emotional — inflicted upon two teenage sisters by their parents is not only shocking; it somehow feels inevitable. A moment of tenderness or levity will not follow any initial jolt of trauma: There is very little here to soften the brutality.

Dear reader, more than one pause may be necessary. This book is Marion Brunet’s first adult novel — she is known for young-adult fiction — but she does not shy away from grownup content.

The story begins with 16-year-old Céline’s scandalous pregnancy and the mystery of who fathered the baby. She refuses to give up the man’s name, not even to her odd and fascinating younger sister, Jo, who has eyes of two different colors and a restless spirit.

Poverty and violence loom over every character at every moment of the book. There are no escape routes, no better lives on the horizon, and every leading figure is trapped by circumstance and geography, whether they realize it or not.

The setting, summertime Provence — more specifically, the Luberon region, full of lavender fields and hilltop villages — may sound idyllic and quaint, but it is only so for tourists. Céline, Jo, and their parents, Manuel and Severine, live in a world much less charming. In a book without a clear hero, antagonists are easy to find.

It is Manuel who emerges as a driving force in the narrative. His rage is on display from the very first page, when he learns of Céline’s pregnancy. Driven by revenge and racism, he blames Saïd, a young Arab friend of the family. From here, the plot unwinds slowly, in chapters that shift perspective among the main characters.

Jo often seems to be the only one who recognizes just how trapped her family is. In one of her many introspective moments, she walks alone, unmoved after a tumble into a field of olive trees. She thinks, “There’s nothing to do here. Without two wheels, without a car, it’s death.”

Quiet scenes often spike into violent sex or sudden cruelty. In one short but memorable passage, Jo meets newborn kittens, whose eyes, “still blind, open and close, trying to grasp the world,” before Saïd drowns them, one by one.

The crime, sex, and scathing language, however, never feel forced. Rather, it seems natural that, for these characters, potentially tender moments immediately turn dark.

The only times of gentleness occur between Jo and Céline. They protect each other fiercely, desperate not to be like their parents, though they feel it is inescapable. In the early days of Céline’s pregnancy, the sisters sneak into empty villas to go swimming as they have every summer, not yet realizing that this will not be possible once the baby arrives, once they grow up a little more.

They fight, play, and tell secrets in the moonlight of a rich woman’s pool:

“Their hiccupping laughter echoes against the stone walls of the villa. Their hair is stuck to their heads, their faces wet, their mouths open in a roaring laughter amplified by the night. Céline’s black mascara is running under her eyes. Her belly and her breasts relax in the eddies. And the turquoise light of the swimming pool gives them a magnificent drowned glow.”

Scenes such as this make it seem a bit of a stretch to call Summer of Reckoning a thriller. The story is certainly dark and menacing, but it does not thrill in the way readers may expect. The domestic thriller or suspense genre is home to novels such as Gone Girl by Gillian Flynn and Paula Hawkins’ The Girl on the Train, books with shocking twists and unreliable (and often unlikable) female narrators. Summer of Reckoning is not that kind of book. Its only mystery is the name of Céline’s baby’s father.

And yet, there is still some underlying layer of suspense that propels the reader forward. “Something is hatching, buzzing in the thick atmosphere, in the family silences,” Brunet writes. “She can feel it, like that sharp taste when biting into a green grape, on alert.” Summer of Reckoning, indeed, keeps the reader on alert, offering no easy rewards for patience.

Penny Zang is a writer and English professor who lives in South Carolina with her family. She graduated from Notre Dame of Maryland University with a B.A. in English, and West Virginia University with an M.F.A. in creative writing (fiction). Her work has appeared in publications such as the Superstition Review, Pank, Louisville Review, and New Ohio Review.