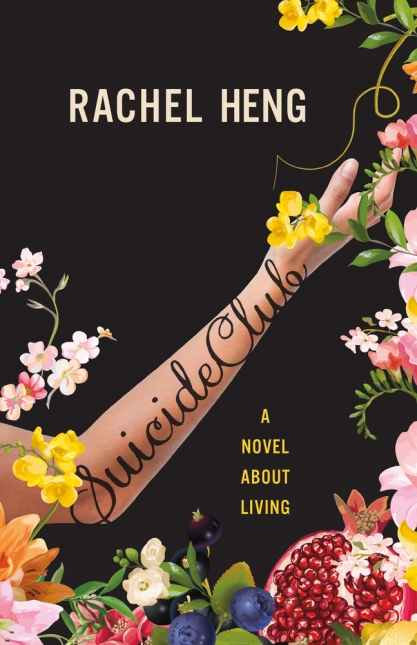 I started the first chapter of Rachel Heng's Suicide Club, which features a party full of so-called perfect human specimens (no blemishes, no extra fat, no wrinkles, pristine diets), on the same day all three of my sons got sick with some pretty serious colds. By the end of the weekend, my wife and I had pneumonia.

It occurred to me that it might be bad timing to read about a future world where immortality was the primary goal while it felt like we were all dying. In fact, I trudged into the waiting room at the doctor clutching my copy of the book, only to find that not only had my fever jumped to 103 degrees, but I was so cold that all I could do was sit there and shiver.

Suicide Club stared up at me as if I'd let it down by not making more progress. But the book's insistence that I read it, even while grossly sick, is a testament to its power.

By the time I'd arrived at that low point in my own health, I'd already read the prologue, in which a man in a tuxedo brings about his own immolation in a viral video. And I'd already met Lea Kirino, a lifer in this new world, as she takes in the "height, posture, muscle tone" of the guests at her 100th birthday party.

Lea is part of the Second Wave, a group hoping to live to be 300. Her life has a glossy veneer of idealized perfection. She's in perfect health, in a perfect relationship with Todd, and has perfect friends — though she doesn't seem very happy with any of it.

Status is her driving force, and by maintaining her many perfections, she hopes to be admitted to the Third Wave of people who will take the next step toward immortality.

Suicide Club takes place in this one possible future where immortality is just around the corner, but it perfectly dissects our current obsession with vitamin drinks and juice cleanses and fad diets and targeted workouts that fuel our quests for some never-attainable body type.

This lack of happiness hovers over Suicide Club, slowly taking on weight as the story progresses, threatening to crush the very society that has been built around it. What's the point of living forever if you have nothing to live for?

Which is why a suicide club that produces suicide videos seems like a natural evolution. Videos that show you exactly how to get around the DiamondSkinTM and the Tough MuscTM and numerous other life-stretching replacements which flow through everyone. Suicide is a tough job.

Lea's seemingly impossible journey from immortality-seeking lifer to camera operator of a suicide video lies at the heart of the novel. When she sees her long-lost father crossing a busy street, she rushes to follow him, only to be struck down by a vehicle. This incident takes her out of the confines of her life and under the watchful eyes of two government Observers, known only as AJ and GK, who think it was no accident she walked in front of a moving vehicle.

In this future world, it's illegal to attempt to end your life, even if it is nearly impossible to do so.

Lea must now attend weekly meetings of WeCovery Group, a support group for people with suicidal thoughts. Her disdain for her fellow members is palpable. Lea decides she doesn't belong because she is unable to see past the physical attributes of the others, the "starched poly-cotton blouse that woman was wearing, the red crack in one man's lower lip, chewed to a pulp, the compulsive tapping of badly shod feet."

In Heng's future world, we are judged by how many human imperfections can be seen at first glance and how well we hide the imperfections in our mind.

Soon after, Lea is reunited with her father, and they begin to forge a new relationship. In fact, the only thing that can crack the steely veneer of the first half of the book is these interactions. Because although Lea thinks her father's presence isn't changing her, and that her future plans are unaltered, it isn't long before the perfect boyfriend and the high-powered job are gone.

The moment when her father gives her ice cream is revelatory: "It was only when the cold sweet fluid touched her lips that she remembered she was eating sugar, synthetic sugar, non-fruit sugar. And dairy, preservatives, additives, food coloring…It was delicious."

This straddling of worlds comes to an end when she discovers her father wants to end his life in a suicide club video. The anger Lea has hidden since childhood begins to resurface; for me, that anger is the most interesting part of the novel.

When Lea's boyfriend returns to make amends, he's shocked to find a much more feral, and human, version of her. And interestingly, so much more likeable. They have quick, violent sex, and then: "She squeezed his neck a little, felt him start to panic underneath her."

It was in that moment that I really began to root for her.

What really makes Suicide Club shine is that it explores big themes without ever getting bogged down under its own weight. It certainly made me ponder death and my own mortality more than I normally do, and I think that's the point. By painting a world on the cusp of human immortality as horribly grim, it also makes you appreciate what we have now even more.

Sure, I could probably get more sleep and work out more and eat better, but in our current time, I can get over pneumonia, immediately eat four cookies, climb behind the wheel of a giant metal deathtrap, to take my family to eat pizza, and then stay up late watching movies and enjoying their company more than anything I could ever imagine.

Life sure is sweet.

Josh Denslow’s debut collection, Not Everyone Is Special, will be published in 2019 by 7.13 Books. He plays the drums in the band Borrisokane and edits at SmokeLong Quarterly.