After a lengthy incarceration, a troubled woman returns to Appalachia and attempts to set her life right. 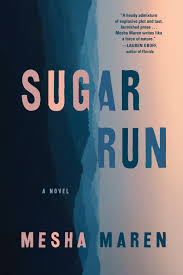 But lost souls attract lost souls, and before Jodi can even locate that now-grown boy, Ricky (the brother of her dead girlfriend), she meets Miranda, the estranged wife of a has-been country singer, and her three young boys. Their love burns hot and then quickly becomes a simmer, but not before Jodi convinces Miranda to run away with her kids and come to live at Jodi's family home in the Appalachian Mountains.

In Mesha Maren's novel, the pieces fit both easily and uneasily together. Just like in real life, it's comforting to think you're on the right path when you don't meet initial resistance. But as the story unfolds, we feel the tension behind every decision, the dread building like mercury in a thermometer. We feel the weight of Ricky as he squeezes into the backseat of Miranda's car with the children. Everything is a mistake, but it's hard not to feel hopeful as they hurtle toward rural West Virginia and Jodi's past.

Upon returning to her family's land, Jodi thinks: "Time did not separate here. The past ran parallel and you could catch a glimpse if you turned quickly enough." And, in fact, Jodi's past does run parallel in the novel.

We alternate between 2007, when Jodi and her newly assembled family try to make a home in the rundown cabin with no electricity and a tarp over the roof, and 1988, when Jodi is similarly enraptured by the alluring Paula and they begin their heads-down plummet into backroom poker games, drugs, and Paula's untimely death, which lands Jodi in jail.

Maren handles the two concurrent stories of women on the run with aplomb, doling out information as the days drift by in the dusty Appalachian town. We feel every drop of sweat. Every burning ray of the sun. The stifling heat makes it nearly impossible to breathe.

Just as the lands surrounding Jodi's cabin are being fracked, poisoning the water and blighting the natural beauty of the place, we learn how these characters are cracking under the weight of their collective pasts. Everything is shifting underneath them.

Soon enough, the violence that has been crouched out of sight suddenly makes a very real appearance. We begin to see the prejudices of this insular community, especially in terms of homophobia. Not even the bond of siblings can keep Jodi’s brother from making threats about her relationship with Miranda. Some things are just not tolerated.

Sugar Run seethes with unchecked aggression and hidden motives. The ongoing fracking becomes the perfect metaphor for what lies beneath the surface of this Appalachian community. Jodi's attempt to create a new future by hiding in her past makes for fascinating reading, even as the comings and goings of other characters get distracting.

But that's the point. Jodi has been frozen in time for the last 18 years, and the world refused to wait for her. Later, as she desperately tries to hold everything together, she finds herself lost in her own town: "The particulars of the roads and directions eluded her but the buildings she passed were riddled with memory-scars."

In the end, it doesn't matter if Jodi wants to atone for Paula's death by rescuing Ricky or giving Miranda's three boys a stable home while she tries to save Miranda from self-destruction. What's important is that Sugar Run reminds readers that memory-scars never heal. They exist to guide us into uncertain futures.

Josh Denslow’s debut collection, Not Everyone Is Special, comes out later this month from 7.13 Books. He plays the drums in the band Borrisokane and edits at SmokeLong Quarterly.