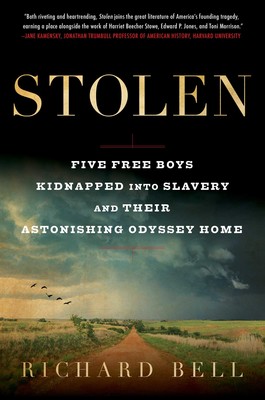 The people who traveled along or supported the Underground Railroad, which led to freedom for many thousands of enslaved men, women, and children before the Civil War, included well-known heroes like Harriet Tubman, along with thousands more who will remain anonymous forever.

But the “railroad” trip north from slavery to freedom is only half the story of the antebellum journey of African Americans.

As Richard Bell describes in Stolen: Five Free Boys Kidnapped into Slavery and Their Astonishing Odyssey Home, a “Reverse Underground Railroad” also operated, with roughly the same number of people traversing it. The route led away from freedom, not toward it. Free blacks, usually children or other vulnerable people, were kidnapped, brought across the Mason-Dixon line if not already there, and sold into slavery.

These reverse-railroad operators were not the brave women and men who sheltered fugitives in isolated farmhouses and urban attics as they headed north, but “salt-hearted” lowlifes who made money from misery.

Bell, an associate professor at the University of Maryland, tells this larger story by focusing on Cornelius Sinclair, 11; Sam Scomp, 15; Joe Johnson, 14; Enos Tilghman, 10; and Alex Manlove, just 8. The boys were kidnapped in August 1825 in Philadelphia, each individually lured into the hold of a ship by food or a bit of money.

They were literally and figuratively bound together and sent to the Eastern Shore of Maryland, where the Johnsons, a dysfunctional family band of kidnappers, operated.

The book and film Twelve Years a Slave recounted how Solomon Northrop, a black, married musician from New York, was drugged and kidnapped into bondage. But as Bell points out, spiriting away a literate and connected adult like Northrop diverged from kidnappers’ usual modus operandi. Far better to lure children or women, whose disappearance would not attract the notice of those in power.

Bell describes Philadelphia as an appealing target given its accessibility to the sea and proximity to the Mason-Dixon line. It had a large, active black community, which also meant more people to snatch. Despite community opposition and parents’ warnings to their children, kidnappers got awfully clever at spotting likely targets and devising ruses to take them.

Unlike Northrop and the boys in Stolen, most people subjected to this traumatizing crime never returned home. Free people became enslaved for life.

The Johnsons marched the boys, along with two women they had also seized, toward Natchez, Mississippi, over the course of four hard months. (The women become supporting characters in the overall narrative, in part because less is known about them.) The group formed its own terrified family until the miracle happened that most on the Reverse Underground Railroad never experienced.

Since the subtitle reveals an “odyssey home,” I’m not giving away that a return to Philadelphia did occur. (But not for all: One meets a sad fate.) A huge gamble by one of the boys pays off. Throughout, Bell stokes the suspense as we wonder how they will escape, especially once they trek farther south.

The boys’ real-life families left no letters or documents (although Bell uncovered a sorrowful “boy lost” advertisement placed by Cornelius’s bereft parents). Already-known sources included letters written to Philadelphia’s mayor at the time and an article in an antislavery magazine. Beyond that, the author says he found sources “buried within thirty-five archives in fourteen states and the District of Columbia.” Transcripts of three key documents are included in the back of the book.

Bell acknowledges how attached he became to the boys during his research, a connection that shines through on the page. Still, he stresses the need to go beyond the human-interest angle to place their experience in the larger context of the slave trade — both illegal kidnapping and the perfectly legal, highly profitable enterprise that flourished throughout the South.

Several white Southerners helped the boys not because of an abhorrence to slavery; in fact, it was quite the opposite. In the 1820s, many “legitimate” sellers and buyers worried that the outlaws’ antics would threaten their business and, in today’s parlance, damage the brand. In any event, the two types of trading became intertwined in the ensuing decades.

Bell believes the case against the kidnappers (yes, several stood trial) had far-reaching impacts, even after the specifics were forgotten. Kidnapping radicalized black communities and led to anti-kidnapping legislation in Pennsylvania. Southerners responded to what they perceived as interference in slavery by pushing for the Fugitive Slave Act, “a bonanza for slaveholders that put the country on a collision course with civil war.”

Stolen’s main text is not much longer than 200 pages, with plenty of white space between the lines. No images exist of the kidnappers or the kidnapped, but Bell makes effective use of period graphics and maps to depict their route. The book is an important addition to a lesser-known aspect of what slavery wrought in America. It is a compelling story, and you will root for these five boys.

Paula Tarnapol Whitacre is the author of A Civil Life in an Uncivil Time: Julia Wilbur’s Struggle for Purpose, about an abolitionist who worked with self-emancipated slaves in Alexandria, Virginia, during the Civil War.