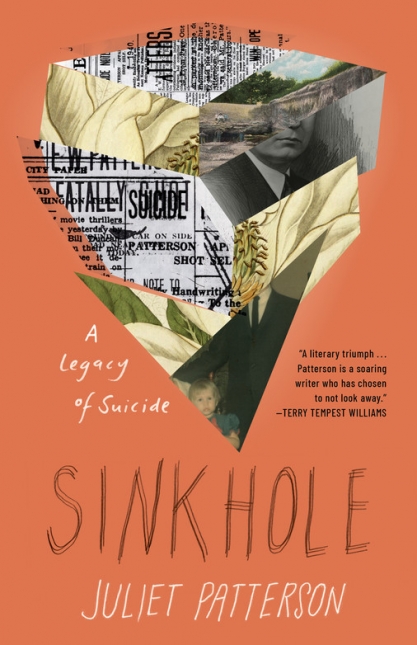 I have been reading Juliet Patterson’s memoir, Sinkhole: A Legacy of Suicide, in fits and starts since May. It has been plucked from a backpack, off a nightstand, and out of the box of stuff easy to get to during a move. This reading odyssey wasn’t because the book was in any way a slog, or even that it fell in the category of, “Well, it’s good, but I’m just not in love” like so many other books do.

Actually, it was the opposite.

The clarity and precision of Patterson’s prose is impressive, her images vivid, and her lack of moralizing refreshing. Yet the subject matter is so intense that I could usually only read 10 pages or so at a time before it simply became too much.

The work opens with her father’s suicide; he hanged himself in the park where he used to walk his dogs. Then, still within the first dozen pages, Patterson reveals that she and her parents are “all the children of suicides. My father was eight when his father, Edward Patterson, took his own life, and my mother was thirty-two when her father, William McCluskey, did the same.”

The rest of Sinkhole, like the passage above, is written with a stark, white-knuckle honesty that grits its teeth and tells you the story as straight as possible.

When a book is brutal, I’m always suspicious that it’s pulling a George R.R. Martin: Employing cruelty for cruelty’s sake. Shock is good for ratings, after all, and dirty laundry sells. Yet the pages-long descriptions of each of the three suicides have a different ethos. Suicide frequently gets lost in the fog of abstractions and platitudes, leaving it with a strange, often dangerous glamour. But nothing is appealing about the self-inflicted deaths in Sinkhole.

Patterson uses the nightmare-worthy phenomenon of sinkholes to ground her memoir and allows the narrative to zoom in on the personal and then out on the cultural issues around suicide. Sinkholes are mostly naturally occurring pits that can swallow anything — from one person to entire neighborhoods. They can appear suddenly or slowly. (A quick image search is fascinating, but the photos of seemingly bottomless abysses are so unsettling that I wouldn’t recommend looking at them right before bed.)

Several sinkholes swallowed parts of Patterson’s parents’ hometown of Pittsburg, Kansas, where massive, now-abandoned coal mines left the land unstable. “How might these environmental conditions have affected my family?” she asks. “Depression? Anxiety? Suicide? And beyond these potential physical effects, what did it mean for my ancestors to have lived in this industrial sacrifice zone?”

Sinkholes, like suicides, can sometimes occur because of environmental factors; other times, they’re the legacy of mistreatment. But the utter swiftness, devastation, and confusion surrounding both are what make them so frightening.

Along with the environmental history braided throughout, Sinkhole offers a master class in how extensive research can add depth and breadth to personal writing. Patterson carefully combs archives, family records, newspapers, and old letters to understand her grandfathers and father, and her dedication to specifics pays off on the page. The problematic binaries often found in the public discourse around suicide fall away.

Because of the author’s commitment to details, nobody in Sinkhole is a victim, villain, or hero. Everyone, including Patterson herself, possesses the good and the bad. Her paternal grandfather may have struggled with alcoholism before taking his own life, but he was also a politician who stood up to the Ku Klux Klan when it terrorized Kansas. Her maternal grandfather fell into and out of poverty, only to save himself by his grit. And Patterson’s father, though disgusted when she came out to him as a lesbian, later confessed that he admired the love Patterson and her partner shared.

Suicide, addiction, and mental illness comprise a horrific trifecta of family secrets familiar to many of us. My own experience with these things may be why it took me so long to finish Sinkhole. It’s also why I made sure I did.

“Reading was one way I tried to occupy my mind, to avoid the worst of its wild, tidal swings, and in the books I read, I learned that my isolation was a normal consequence of grief associated with suicide,” writes Patterson. “In the season of my father’s death, books massed in piles on the floor. I wanted answers. I wanted to understand not just bereavement, but suicide itself.”

Despite the author’s beautiful writing, completely understanding suicide is not something any of us get to do. Not really. But perhaps, with help from books like this, it can be a tragedy fewer of us have to face alone.

Gretchen Lida is an essayist and an equestrian. Her work has appeared in the Washington Post, the Los Angeles Review of Books, and many other publications. She is a contributing writer to Horse Network and the Independent and is also the host of HN Reads on Horse Network, a monthly interview series with authors of horse books. She lives in Chicago and is still a Colorado native.