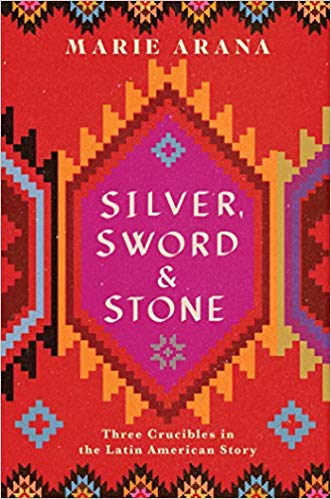 What do the widow of an impoverished Peruvian miner, a drug-dealing thug operating in Washington, DC, and an earnest Catalonian Jesuit have in common? As Marie Arana shows in the beautifully written, meticulously researched Silver, Sword & Stone, they are all products of the three crucibles of Latin American history: silver, sword, and stone.

“Silver” signifies mineral wealth — not only precious metals but also oil and, most recently, illegal drugs. “Sword” refers to the violence that has plagued the region since pre-colonial times, while “stone” connotes the profound spirituality that pervades both indigenous and Christian Latin America.

Arana does not blame all of Latin America’s ills on the Spanish conquest or Yankee imperialism, but rather argues that the obsession with precious metals, violence, and religion was endemic to the region long before the arrival of the conquistadors. However, the greed and thirst for dominance of foreign powers, especially the United States, have greatly exacerbated this mania.

Arana interweaves her account with the real-life stories of three people who represent the crucibles. Leonor Gonzales, whose husband died in a mining accident, pounds rocks high in the Andes every day in hopes of finding a speck of gold, just as her ancestors did.

For the Incas, gold, resplendently yellow, was a reflection of the sun, the father of all earthly life, while silver represented the white deities who lit the night sky. The Inca, or emperor, was the sun god, and his sovereignty was symbolized by gold. Gold and silver were not used as currency; they were revered as manifestations of divine glory.

However, the Inca Huayna Capac made gold an obsession. Not only were his quarters crammed with precious metals, but he commissioned gold utensils, chairs, litters, and statues. Under Pachacutec and Tupac Inca Yupanqui, gold and silver “began to be regarded as a mark of earthly glory.”

Tupac returned from conquests with trains of llamas laden with silver. To celebrate the birth of a son, he commissioned a gold chain that extended from one end of Cuzco’s marketplace to the other and required an army to carry it. To acquire precious metals, he waged war and worked men mercilessly in mines, often uprooting them and sending them to faraway, mineral-rich locations.

The Mayas and Aztecs, who both considered themselves People of the Sun, accumulated huge stores of precious metals that served as symbols of their potentates’ power. Montezuma, a cunning, ambitious, and ruthless Aztec ruler, turned his realm into a virtual paramilitary state but sanctioned a thriving market with a lively trade in gold and silver. Gradually, precious metals became accessible to a rich proto-bourgeoisie, which increased the demand for them.

By the time Spaniards arrived on American shores, gold had been established as the currency of Europe, and Spain became gripped with gold fever. No matter how much Spaniards insisted their aim was to Christianize indigenous peoples, argues Arana, the real impetus behind the Conquest was mineral wealth.

Cortés ravaged Aztec lands in his quest for gold and tricked Montezuma into providing him with hundreds of thousands of pesos of the metal. Then he had him put to death. In the south, Pizarro made the Inca Atahualpa his virtual puppet, then looted his property, making off with all his treasure.

Later, Spaniards struck a bonanza in Potosí, establishing “the largest, most crushing system of labor exploitation in the Spanish colonies.” Indigenous men were “wrenched from their homes, marched in chains across the altiplano, and made to toil in the mines.” As cruel as abuse had been under the Incas, under the Spaniards, it was far worse.

Carlos Buergos was a two-bit thug in Havana before being shipped off to Angola to fight in Cuba’s bloody, senseless war as a Soviet surrogate. After a stint back home as a horse thief, he was whisked off to Miami with the Mariel boatlift in 1980. Once in the U.S., he became involved in drug and other criminal activity in Washington, DC. He is, for Arana, the continuation of a deep-rooted scourge.

Long before Columbus’ arrival, the Caribs, a local warrior tribe, systematically raided peaceful Caribbean communities. “For all the revisionist scholarship that has portrayed Latin American Indians as docile, peaceable innocents in the face of Spanish and Portuguese brutality, the archaeological evidence suggests otherwise,” writes Arana.

The wars of liberation, at first undertaken in the spirit of Enlightenment, quickly degenerated into unspeakable savagery that reduced the civilian populations of Latin America by a third. Bolívar, who had dreamed of uniting the masses under democratic ideals, became an autocrat.

The wars left the region highly stratified by race, setting the pattern of violence and racial discrimination for the future. The kind of criminality represented by Buergos has made Latin America one of the most dangerous regions on the planet. Of the 50 most violent cities in the world, 43 are in Latin America, and illegal drugs, which have replaced gold and silver as an exportable commodity, are a major reason why.

Xavier Albó, a Catalonian Jesuit who embodies the principle of “stone,” forged his career in the Bolivian Andes, where he learned the local languages and became absorbed into the native culture. The indigenous peoples of South and Central America had always had a deeply spiritual relationship with nature and built huge stone monuments to their gods.

War went hand-in-hand with sacred rituals, including human sacrifice, even child sacrifice. The conquistadors saw such practices as barbarous, so that “the violence of Latin America’s religious past became the perfect justification of a violent religious future.”

The Spanish attempted to obliterate indigenous religions, massacring or enslaving native populations and constructing huge stone cathedrals on the very ground where indigenous temples once stood.

Until recently, the Church sided with the powerful white oligarchy in Latin America’s endless upheavals, driving the masses into the arms of evangelical Protestant missionaries. Although Latin Americans are still overwhelmingly Catholic, believers have begun leaving the Church in “breathtaking numbers,” finding in the less structured Protestant sects a spiritual authenticity closer to that of their native religions.

Albó has sought to rectify the wrongs done by previous generations of priests. Unlike them, he does not seek to convert, but to understand. He is concerned not only with the spiritual needs of indigenous people, but also with helping them improve their material conditions, educational opportunities, and political impact.

Silver, Sword & Stone is a must-read for anyone struggling to understand Latin America’s tumultuous past and our fraught relationship with our southern neighbors. Arana has done us a service with her clear, even-handed treatment of the subject.

Bárbara Mujica, a professor emerita at Georgetown University, is a novelist, short-story writer, and essayist. Her latest novel, I Am Venus (Overlook Press), explores the identity of the model for Velázquez’s Rokeby Venus. Her previous fiction includes the international bestseller Frida, based on the relationship between Frida Kahlo and Diego Rivera, and Sister Teresa, based on the life of Teresa of Ávila. Mujica has won several prizes for her short fiction, including the E.L. Doctorow International Fiction Competition, the Pangolin Prize, and the Theodore Christian Hoepfner Award for short fiction. Three of her stories and two of her novels have been winners in the Maryland Writers’ Association national competition. Her latest book is Religious Women and Epistolary Culture in the Carmelite Reform: The Disciples of Teresa de Ávila, scheduled for publication next spring by Amsterdam University Press.