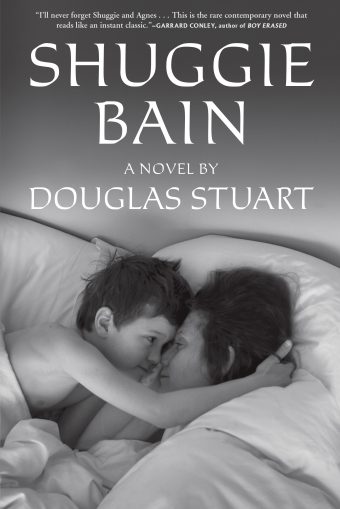 This is a book I did not want to read. Why? I didn’t like the title.

First takeaway: Never judge a book by its name.

Second takeaway: This is an instant classic. A novel that takes places during the Thatcher years and, in a way, defines it. A novel that explores the underbelly of Scottish society. A novel that digs through the grit and grime of 1980s Glasgow to reveal a story that is at once touching and gripping. Think D.H. Lawrence. Think James Joyce.

Third takeaway: the American reader will need a Scottish to English dictionary to get through some of the local language (e.g., wean = child; smirr = drizzle; doubt = cigarette butt). There are many more instances of working-class Scottish dialect, but don’t be deterred. This novel is well worth the slog through unfamiliar lingo. And the language is so well tuned that it transforms a working-class tale into a literary tour de force.

Shuggie Bain is the story of a young boy growing up in a dysfunctional family amid politically fueled economic turmoil. Shuggie’s mother, Agnes, is an unrepentant alcoholic, and his father, Shug, is a taxi driver who despises his wife’s addiction to “the drink,” cheats on her whenever the opportunity arises, and ultimately abandons her to a low-income housing development called Pithead, a depressing colliery where residents survive on government handouts.

Shuggie’s half-brother and half-sister soon manage to escape from an environment they recognize as untenable, leaving Shuggie to take care of a mother who, for the most part, is so inebriated that she is unable to attend to herself. At the same time, Shuggie is forced to face his inability to be like the other boys his age and, as he enters his teens, begins to struggle with his own sexual identity.

Shuggie Bain is as much about Agnes as it is about Shuggie himself. Much of the story centers around her drunken binges and her desire to present herself as someone who is above her peers, for she maintains an outward appearance that belies who she truly is, modeling herself after Elizabeth Taylor, a not-so-subtle metaphor given Taylor’s own struggle with alcohol:

“This was where she excelled. Every day with the make-up on and her hair done, she climbed out of her grave and held her head high. When she had disgraced herself with drink, she got up the next day, put on her best coat, and faced the world. When her belly was empty and her weans were hungry, she did her hair and let the world think otherwise.”

Indeed, Agnes spends most of her government allowance on alcohol and mail-order catalogues, raiding the hot-water dispenser for change whenever she needs to purchase food for her family. Later on, she tries to mend herself by finding a job, attending A.A. meetings, and going dry as she allows herself to become attached to a man who cannot understand the disease that alcoholism is.

This, too, however, leads to disappointment and failure, and Agnes soon joins the ranks of “the drouthies” once again, swigging cheap lager and settling back into the anger she has harbored most of her adult life.

And you’ll find yourself cheering for Agnes as she struggles to overcome her addiction and rooting for Shuggie as he faces down bullies and continues to believe, naively yet wholeheartedly, that his mother will eventually give up the drink.

This is a story of hope and despair. Some things right themselves; others don’t. It is realism at its best: a picture of the world as it is for those stuck in circumstances from which they cannot escape, one that relentlessly strives for redemption. Don’t expect a happy ending, but do expect to find yourself engrossed in a story that will leave you both wowed and numb.

Mike Maggio’s newest collection of short fiction is Letters from Inside: The Best of Mike Maggio (Vine Leaves Press).

The Tumbling Turner Sisters: A Novel

A fast-paced story of survival and feminine strength.

In the Language of Miracles

A broken family struggles to navigate the one-year anniversary of a community tragedy.