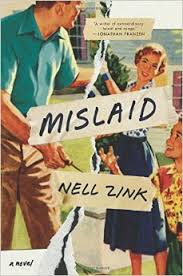 In her second novel, Mislaid, Nell Zink unflinchingly takes on issues of sexuality, gender, class, and race while weaving an entertaining story about a cast of colorful characters — no small feat.

At the center of this unforgettable novel is a white woman passing as black, which not only happens to be especially topical given current events, but also gives us the other side of the “passing” story in a long line of books that examine racial passing — the central trope of which is usually a black passing as white — with the most famous example perhaps being Passing by Harlem Renaissance writer Nella Larsen.

But Mislaid is more than a novel about passing. It’s also a book about homosexuality (both of the protagonists, though married to one another in a heterosexual marriage, are gay), the changing of the American South (the setting is Virginia from the 1950s through the 1980s), and gender and class (why would a well-off white woman choose to live in poverty as black to escape her marriage?).

More importantly, Zink’s voice is startlingly original. This is a writer with her own unique vision, someone independent, an expatriate outside the American mainstream. She’s erudite and irreverent, witty and insightful.

Peggy Vaillaincourt, one of the book’s protagonists, was born north of Richmond in 1948 to parents who were well off — her father was an Episcopal priest; her mother was his wife, “a challenging full-time job.”

Intelligent but not deeply reflective, Peggy is a lesbian in a time when such self-knowledge, especially in a teenager, is a rarity. Her interest in women leads her to conclude that she should have been born a man — and boyish she is, with “narrow hips and flat chest,” which is what first attracts her college professor Lee Fleming, a poet with strong homosexual leanings, an heir to old Virginia money, his parents staunchly of the Old South.

Lee is more self-aware than Peggy, but he is also self-absorbed. Gay New York poets swarm to his idyllic home, drawn by the lure of “handsome Southerners who owned counties.” Stillwater College, where the events of the novel unfold, is small and rural — a place that went from a plantation to a school for girls to a teachers college and finally to a women’s college where, by the 1960s, it had become “a mecca for lesbians.”

Both Peggy and Lee are “mislaid” in their affair from the start — for both are homosexual, giving in to a momentary passion. For Lee, Peggy “was androgynous like the boys he liked, but she made him wonder if he liked boys or just had been meeting the wrong kind of girl.”

When this ill-fated affair leads to pregnancy, Peggy is forced to leave college, and the couple marries. Lee carries on with his teaching and entertaining, largely unconcerned about Peggy or his son.

Ten years later, now with two children, Peggy seeks a way to escape the marriage and the series of infidelities (both with men and women) that Lee parades before her. When she drives his car into a pond and he threatens to have her committed, Peggy takes her younger child, daughter Mickey, and flees, leaving Lee with their 9-year-old son, Byrdie.

Peggy and Mickey assume borrowed identities — Meg and Karen Brown — and this is where the novel becomes a biting commentary on race in America, for Meg and Karen begin to “pass” as black living in an abandoned cabin in the backwoods of Virginia. Peggy/Meg does nothing to alter their appearance, and despite the telltale blonde hair and light complexion of Mickey/Karen, they have no trouble passing.

Due to the “one-drop” rule, most people assume that the Browns are simply light-skinned African Americans. Karen, too young to remember her previous life, believes she is, in fact, black, as does everyone she encounters.

When Meg goes to enroll Karen in school, the clerk doing the paperwork is at first surprised to learn that the Browns are “colored,” but “a close look revealed that it was true. Meg’s coarse curls and knobby heel bones were dead giveaways to the connoisseur. The daughter was one of those pallid, yellow-haired black kids you sometimes see. Frog-belly white, no trace of pink, curly tendrils all around her hairline. Probably anemic and undernourished — a lot of rural black kids had worms — but very close to passing.”

Ironically, the white clerk — and a number of other people, both white and black, that the Browns encounter — sees in Meg and Karen the race that they are determined to see.

In fact, the Browns become emblems of black ascendancy to many of the local whites. Karen becomes “the idol of suburban emigres. The ghostlike, flaxen-haired black child was almost a matter of civic pride. They hoped she would stay in the county and marry a light-skinned, blue-eyed man to found one of those conversation-piece dynasties.”

And the whites find Meg “so delightful and approachable! A natural ambassador of the newly ascendant educated black middle class.” The whites loves Meg and Karen because they are “black” in a way they approve of — that is, they are very nearly white. Zink’s novel is peppered with commentaries like these about race, gender, and class in the South, and her book is worth reading for these keen observations alone.

Hiding in rural poverty as black females, Meg and Karen easily escape detection, despite Lee’s efforts to track them down. The Vaillaincourts, meanwhile, are unconcerned about their daughter and granddaughter’s whereabouts: “When two females vanish from a patriarchy, both of them attached to a homosexual, the ripples can be truly minimal.”

Meg ekes out a shady living, hiding with her daughter for over a decade, until Karen, her black boyfriend, Temple, and Byrdie all end up as students at the University of Virginia together, where the family is finally reunited under the most extraordinary circumstances.

The ending of the novel, featuring an unlikely reconciliation that is in many ways too easy, feels a bit contrived. No one, it seems, has to pay the price for the devastating decisions that have been made. The conclusion is comedic, lacking the tragic thrust it may have had.

Everyone, it seems, is fulfilled, brimming with hope and optimism, not least of all Karen/Mickey, who has no trouble forgiving her mother for the lifelong betrayal and years of needless poverty, nor does she struggle with coming to terms with her “white,” upper-class identity. Still, the real joy of this book is in Zink’s startling vision. Read this novel for a glimpse into a genuinely original and dazzling mind.

Yelizaveta P. Renfro is the author of a book of nonfiction, Xylotheque: Essays (University of New Mexico Press, 2014), and a collection of short stories, A Catalogue of Everything in the World (Black Lawrence Press, 2010). Her fiction and nonfiction have appeared in Glimmer Train Stories, North American Review, Colorado Review, Alaska Quarterly Review, South Dakota Review, Witness, Reader's Digest, Blue Mesa Review, So to Speak, and elsewhere. She holds an MFA from George Mason University and a Ph.D. from the University of Nebraska.