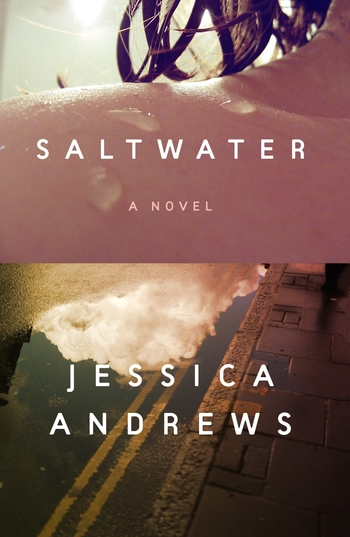 “It begins with our bodies. Skin on skin.” This is where Saltwater begins — with a fierce bond between mother and daughter. But must Lucy go to another place with a different sense of time in order to find “the most absolute version of herself”?

She’s imaginative and pretty, with a passion for books, a girl with “all this north deep in my soul.” Can she escape the drudgery of her working-class background in northern England? And why do those who love you leave when you most need them?

These are some of the questions posed in Jessica Andrews’ exquisite debut novel. But really it’s atmosphere, language, and a deep sense of place, as much as any answers to these questions, that keep you turning pages. With some chapters running only one or two sentences, the pacing is brisk. But the writing is lyrical, fresh, and poetic. I was reminded sometimes of Dylan Thomas.

The narrative skips from one place to another as Andrews crisscrosses through time. Narrator Lucy reflects on family life in Sunderland and her efforts to stay connected. She moves to London, where space is different, people are different, and everybody is preoccupied with reinventing themselves. Then she escapes to her grandfather’s Donegal cottage, where time moves slowly. “Sometimes,” she reflects, “in order to move forward you have to go to the edges.”

But alcoholism and rage are passed down generations. Lucy tells us about her mother’s childhood, and how, on nights when her grandfather became drunk and abusive, her grandmother shook the girls from their dreams and bundled them out of bed and into their coats:

“They walked around the streets in the cold, trying to stay wrapped up in the orange fur that pulsed from the street lights. When enough time had passed, my grandmother took them home and they crept up the stairs, being careful not to wake him as he snored on the settee with his mouth open.”

Lucy’s father is also an alcoholic. He’s not abusive, although he periodically disappears on drinking binges for days on end. Lucy’s mother struggles to raise Lucy and her brother, Josh, alone. But having been indulged because of his deafness, Josh is liable to fly into uncontrollable tantrums and rages, “as though there were small sharp springs coiled up inside of him and he needed to scream and scream until everything was gone.”

Their mother is full of love for her children. She’s also limited and rather shallow. Sometimes she takes the children back to Donegal, where she has a few romantic affairs. “She couldn’t bear the feeling of all of the years of her life stretching out before her in a series of jobs and car, and weddings and grey Tuesday afternoons with freshly Hoovered carpets.”

And where does Lucy’s mother — daughter and wife of an alcoholic — ultimately find refuge? Often in the pub and in drink. And where does Lucy find refuge? Also in the pub, in partying, drinking, drugs, and sex. Occasionally also in writing. “Writing essays and stories took the knot out of my stomach and unspooled it across the page,” she tells us.

But Lucy is happiest, or at least she seems to feel she's onto something bigger than herself, in her teenage life in Sunderland — actually in the village of Washington — ancestral home of George Washington. The writing here is particularly evocative: all that desperate hunger to reinvent oneself, to be part of a scene, find a crowd, stay pretty, thin, and desirable, shop for cool clothes in charity shops, or listen to mix CDs, “learning the words to the songs I believed would help me gain respect in the eyes of people I deemed cool.”

These passages took me back to my own teenage years, although I’m more Lucy’s mother’s generation than Lucy’s — to family holidays in the same locations in the north of England, coming into myself as a pretty girl, desirable and trendy, but also interested in books. It was an age where I felt the future spreading out before me and thought it might contain anything.

There’s something both touching and sad when Lucy graduates from Kings College, London. She is her family’s hope and pride. They all come dressed to celebrate. But they look out of place, and Lucy’s father goes off on another bender. Her mother hits the wall. “‘I would have loved to spend this weekend in the pub,’ she fumed. ‘But I can’t, can I? I’ve got you. I’ve got Josh. I’ve got responsibilities.’”

Saltwater is a gorgeous coming-of-age novel. It’s about the legacy of alcoholism. It’s about how we bury our identities in various categories in order to make sense of the world and our place in it. It’s also about that turning point in life where either you break free from a limited background and hurl yourself into the wider world, or you take refuge in the local pub and find work in the Nissan plant in Sunderland. All the schoolboys know that’s waiting for them “to grow into the overalls.”

Lucy is hungry for a larger life, even as she is hemmed in by her notions of fulfillment. Interestingly, it’s when she gets out of the city and back to Donegal — to the family cottage passed down from Aunt Kitty to her grandfather and finally to her — that she finds her way into a world beyond herself, a world of books, meaningful sexual connection, and nature.

So perhaps the story ends as it begins, in a landscape which will be there long after she has gone. “All the tight closed parts of myself drift away in his mouth like sand in the wind,” Lucy writes. “I listen to my body and I let her do what she wants.”

Amanda Holmes Duffy, author of the novel I Know Where I Am When I’m Falling, is a book-club facilitator for Fairfax County Public Library and has a weekly podcast, “Read Me a Poem,” produced by the American Scholar magazine.