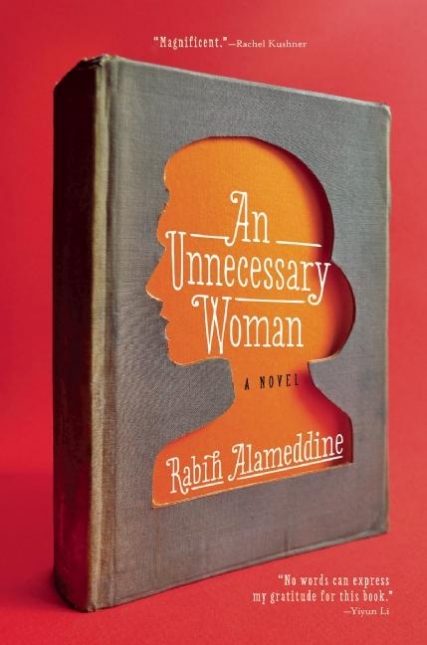 Family and society define Aaliya, the narrator of Rabih Alameddine’s new novel, An Unnecessary Woman, as useless and an “unnecessary appendage.” Left to her books and memories, she lives alone in a crumbling Beirut apartment, where she has spent the last 50 years translating novels into Arabic. No one is allowed to read her work. No one even knows she does it. The book spans three days of this unique, strange, invisible life Aaliya has constructed so carefully and desperately, compelling readers to see where it takes her.

Aaliya’s hunger for books is insatiable and her tastes are wide-ranging. Books are her food — she eats very little and cooks even less, confessing at one point that she has never chopped an onion in her life. But she insists on a strange rule for her translations: She works only with novels already translated into English and French, which limits her choices. She admits her translations of translations are “one step further removed from the original” and would have no readership. Her self-imposed rule seems a failure of courage, and it makes the reader wonder what precisely she fears. The picture becomes clearer as the story of her life unfolds.

Reading An Unnecessary Woman is about listening to a voice — Aaliya’s — not cantering through a plot, although powerful events do occur, both in the present and in memory. As Aaliya meanders through thoughts and reflections, she shares her opinions on everything from the dehumanizing effects of war, to the impossibility of describing sex, to what makes Hemingway “insufferable.” But within the minutiae of the three days that fill the book, extraordinary things happen inside Aaliya, which other characters around her cannot see.

Aaliya’s mind, especially in the beginning, tends to link from one story, or a piece of a story, to another in a way that recalls The Thousand and One Nights: Aaliya makes readers continue reading to understand the part they just finished, only to find they have been set up again. The Thousand and One Nights is itself a kind of translation, a collection of stories from different cultures that, as they were passed down, became altered with successive tellings. Likewise, Aaliya’s translated books alter in the retelling, and so do her memories, and so has her beloved Beirut, reinventing itself again and again over the centuries.

Aaliya’s voice, however, is pure — she comes to us untranslated, unfiltered. That doesn’t mean she’s entirely reliable, even though her vulnerability and candor make her fundamentally trustworthy. She gets things wrong sometimes; for example, she believes her teenage great-niece, who goes by the Western name Nancy, really is named — remarkably! — Nancy. Such minor slips suggest there are larger areas where Aaliya may be going astray in her thinking. Figuring out how reliable Aaliya is as a narrator is part of what makes reading her story so engaging, and this puzzle is part of the fun Alameddine is having with his readers in what is indeed a fun, and often funny, book.

Much about An Unnecessary Woman, in fact,is playful. It is rich in quirky metaphors: Aaliya refers to her mind as an ant farm and invites the reader to imagine what happens if it is shaken. She also makes an old cliché fresh when she turns “spud” into a verb: Nancy “spuds on the couch in front of the flickering television.” Toying with the reader’s expectations, the book is whimsical on a meta level as well. Aaliya’s tastes lean toward absurdist fiction and she disapproves of epiphanies, but the arc of her own story doesn’t quite mesh with these tendencies. In a novel with so many opinionated digressions about literature, readers naturally look for the author’s thoughts in the character’s words. No doubt Alameddine shares some of his own ideas here — perhaps like Aaliya, he wonders “what the point is with Hemingway” — but it would be a mistake to think this is his manifesto. There may be an unreliable author, of sorts, behind our unreliable narrator.

Even the choice to have Aaliya be a translator is tongue-in-cheek. As a translator, she is a channeler, not an artist, although it could be argued that artists are channelers too. Aaliya’s anxieties are those of a writer when she whines, “None of this art business is of any consequence. It is mere folly.” She insists, too strenuously, that she cares only for the process, not the product. She slips and reveals her true love for her work, however, when she tells us she does it “because it makes time flow more gently.” Not more slowly, or easily, but more gently — a lovely idea that says much about the sustaining power of this work for her.

An Unnecessary Woman is not a game, though; it is a grave, powerful book. It is the hour-by-hour study of a woman who is struggling for dignity with every breath. Terrible questions hang over her story: Does a life that no one sees, no one cares about, matter? Does a life matter at all? Does work matter if it is not shared or does not last? The meaning of human dignity is perhaps the great theme of literature, and Alameddine takes it on in every page of this extraordinary book.

Aaliya’s voice, which is strange and new at first, grows on the reader slowly, until she becomes a friend. Put the book down and pick it up again, and there she is — we know her. She invites readers to engage with her story the same way she engages with the books she reads: “I try my best, not always successfully, to let the wall crumble just a bit, the barricade that separates me from the book. I try to be involved.” Readers will also be rewarded if they, too, work to break down the wall and become involved in this hushed, intimate conversation with Aaliya.

Sally Shivnan’s fiction and essays have appeared in the Georgia Review, Antioch Review, Glimmer Train, and other journals, and her travel writing has been featured in anthologies, including Best American Travel Writing, as well as in the Washington Post, Miami Herald, Nature Conservancy Magazine, and many other publications and websites. She teaches creative writing at the University of Maryland Baltimore County,  where she is the English department’s director of writing and rhetoric.