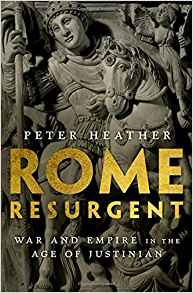 According to popular wisdom, ancient Rome “fell” in 476 AD. But, as Peter Heather’s marvelous new book illustrates, this fateful year did not entirely blow out the candles on the saga of imperial Rome.

On the contrary, it ushered in a century of ups and downs for a far-flung empire which — though governed from Constantinople — still looked to Rome as its spiritual capital.

Rome Resurgent: War and Empire in the Age of Justinian explores this turbulent period. Author Heather focuses on the sixth-century rule of the Emperor Justinian (r. 527-565), whose militant regime recovered much of the western lands previously lost to the “barbarian” ascendency. This was true for the Italian peninsula itself and for much of North Africa, as well.

This volume is the latest in its publisher’s Ancient Warfare and Civilization series. (An earlier entry, Jennifer T. Roberts’ The Plague of War, was reviewed previously in the Independent.)

In the sixth century AD, Justinian’s realm — largely Latin-speaking among its elite — enshrined classical-age Rome as the touchstone of civic identity and values. Readers new to the topic may be surprised by another fact about this era: The world Heather describes was Christian throughout, both in the imperial establishment and among the Celts, Vandals, and Goths occupying large chunks of its domain.

A perceived endorsement by the Christian God was the foundation of fifth- and sixth-century imperial rule. The emperor was viewed as the deity’s surrogate, with God’s favor or disfavor evidenced in the attainments, or failures, of the ruler and his administration.

Justinian would seem to score high on this scale. His 38-year reign was marked by the relative success of his diplomatic and military forces in holding off the Persian empire on one flank, and in reclaiming lost territories in Italy and North Africa on the other. Patriotic, properly religious citizens would likely rate this track record as evidence of sustained divine favor.

Still, there were occasional setbacks in the emperor’s continuous achievement of success and prestige. An abortive coup in 532, for instance, saw Hagia Sofia, Constantinople’s grand cathedral, reduced to rubble. It’s no wonder, given the temper of the times, that Justinian moved quickly (by contemporary standards) to restore the cathedral to its former glory.

Similarly, Justinian had no fewer than 33 churches built in Constantinople during his reign, arguably another activity attesting to the centrality of Christian religious consciousness in the governance of the realm:

“Religion was the state’s business, the state’s business was religious, and the whole of Constantinople functioned, in a sense, as an open-air Hagia Sophia writ large: a theatre where key ceremonies of God’s empire were regularly played out. Carefully orchestrated ceremonial to make the point that the emperor was God’s chosen ruler for his own special society was as old as the Roman Empire itself, of course, but the scale, frequency, and concentration of such ceremonies…had turned sixth-century Constantinople into an extraordinary showcase of Roman Christian imperium.”

Still, the emperor’s self-assumed role as advisor/mediator in the spiritual commonweal was regularly put to the test by simmering — and ultimately fateful — disagreements concerning the human nature of Jesus.

Although Justinian never put the Christological controversies to rest, he did advance the establishment of order among the empire’s secular laws by authorizing the collation and organization of Roman law and hundreds of years of legal precedents attaching to it.

The outcome of this multi-year endeavor has become known to posterity as the Code of Justinian. This achievement would come to anchor the emperor’s reputation through the late Middle Ages and Renaissance, as evidenced by Dante’s assigning Justinian a featured role in the Paradiso.

If you are interested in this period, you will find many appealing narrative streams here. Notable among these are the exploits of the emperor’s general Belisarius, perhaps the prime mover in the empire’s resurgence.

Author Procopius was a contemporary fanboy of Belisarius and, by extension, of Justinian himself, and an important source of our knowledge about the era. Later, Procopius rather viciously turns on the emperor in a less famous work, The Secret History, where he characterizes him as petty, vengeful, and incompetent.

Empress Theodora comes in for a similar knocking-about. In Procopius’ panegyric volumes, he portrays Theodora, though low-born and an “actress,” as virtuous and caring. In his later invective, he transforms her into a nasty, lustful shrew, a consorter with demons.

So it goes with Roman history. Classical invective lives at one end of the spectrum, the official party line at the other. After all, both Theodora and Justinian are canonized in the Greek Orthodox pantheon.

Rome Resurgent is singularly rich in detail, as well as in informed insight into a period balanced on the cusp of the empire’s transformation from Roman to Byzantine. And just beyond the frame of this saga lies the shattering emergence of Muslim hegemony in the Middle East and the African Mediterranean.