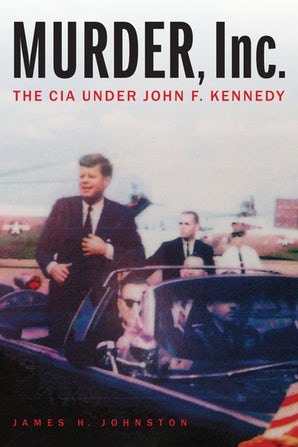 Like weeds in an untended garden, conspiracy theories flourish on the Internet. But long before the digital age, pioneering skeptics were shaping the first pathbreaking collection of modern conspiracy theories around the 1963 assassination of President John F. Kennedy.

To be clear, James H. Johnston’s Murder, Inc.: The CIA Under John F. Kennedy is far from a fervid rebuke of established history on the shocking events in Dallas of almost 60 years ago. Indeed, the author debunks some mainstays of the Kennedy conspiracy-theory industry.

He notes, for instance, that the supposedly impossible path of the “magic bullet” that struck both Kennedy and another passenger in his car wasn’t really magical at all but fully conformed to ballistic science. He accepts Lee Harvey Oswald as the single gunman.

Instead, Johnston asserts a series of plausible and important claims. First, Oswald may not have been a crazed loner but a clear-eyed agent of Fidel Castro’s revolutionary Cuba. Second, the reason official investigations of the assassination never reached that conclusion is that they were purposely steered away from the relevant evidence. And third, the evidence was avoided because it would have also revealed the Kennedy administration’s own assassination plot: a determined effort to kill Castro.

Johnston has harbored these beliefs for a while. He was a staff attorney for the Senate select committee that, in the cleansing post-Watergate era of the mid-1970s, rooted out dirty government secrets, including the CIA’s Castro assassination plans. The question was raised then — but never resolved — as to whether Kennedy’s assassination was preemptive retaliation by the Cuban leader.

A lot of information related to Kennedy’s killing, some of which also provides a fuller picture of the anti-Castro plot, was still classified in the ’70s. In an attempt to tamp down the conspiracy fires that still raged 30 years after JFK’s death, Congress voted in the early 1990s to release a huge trove of documents and create a dedicated archive of assassination data. Johnston draws on this material, along with published accounts and his own sleuthing, to construct his argument.

The book offers a damning description of a halting, uncoordinated investigation into the most infamous American murder of the 20th century. U.S. leaders like longtime FBI director J. Edgar Hoover seemed more determined to manage the public’s perception of the crime than find the truth. In particular, officials were intent on not blaming Cuba — a likely suspect, given the tensions between the two countries — for fear an outraged American public would demand an invasion of the island that could touch off World War III.

Of course, the effort to contain the public’s reaction to the killing of their president backfired. The purposely constrained investigation only bred doubt and suspicion that persist to this day.

Johnston notes that the Warren Commission, appointed by new president Lyndon Johnson to assemble the authoritative account of the assassination, was hamstrung by a lack of its own investigative staff, relying instead on the FBI and CIA for legwork.

Those two agencies, in turn, concealed information from each other and the commission. And thanks to the CIA practice of “compartmenting” information, even the agency staff working on the JFK assassination didn’t know about their colleagues’ Castro plot.

Johnston presents a strong circumstantial case that authorization for that planned extra-legal killing came from the highest authorities: the president’s brother, Attorney General Robert F. Kennedy — who was unofficially heading up the administration’s aggressive response to the Cuban regime — and even the president himself.

(The book is a jarring reminder that RFK, himself assassinated less than five years after his brother while running as an anti-war presidential candidate, was, in the early 1960s, a hardline Cold Warrior.)

Though the prose in Murder, Inc. is generally crisp and clear, Johnston is a more diligent researcher than writer. A glossary would have helped readers keep straight the often similar-sounding officials and bureaucratic committees (e.g., the “Special Group” vs. the “Standing Group”).

The narrative, too, sometimes gets snagged on details: A literal poison pen as assassination weapon is intriguing, but not at the length it’s discussed here. Clunker sentences disappoint and distract (“If the selection seems to be déjà vu of the president’s thinking in the selection of General Lansdale a year earlier, so be it.”), while words are sometimes wasted on the obvious: Oswald’s rifle was “crucial to the assassination.”

Along with trying to prove a Cuban connection, the book displays the irritation of a professional investigator at a botched investigation — what he dubs “one of the greatest [intelligence failures] in American history.” Readers will share his angry shock at obvious leads ignored, discrepancies unreconciled, and witnesses unquestioned.

But his greater disappointment is with an immoral U.S. policy to assassinate a foreign leader that he believes ricocheted, depriving us of our own leader. The very hour Kennedy fell in Dallas, CIA agents in Paris were giving a disaffected Cuban official final approval to take out Castro.

The plotting against Castro ended with Kennedy’s death. The new president — whose description of the Kennedy administration’s attempted use of hitmen supply the title of the book — disapproved of assassination as an instrument of foreign policy. Besides, Johnson’s attention was soon distracted from Cuba to another small Communist nation he believed needed American attention: Vietnam.