Rock Me on the Water: 1974 — The Year Los Angeles Transformed Movies, Music, Television, and Politics

The author makes a strong case for the Left Coast’s creative primacy during the mid-70s. 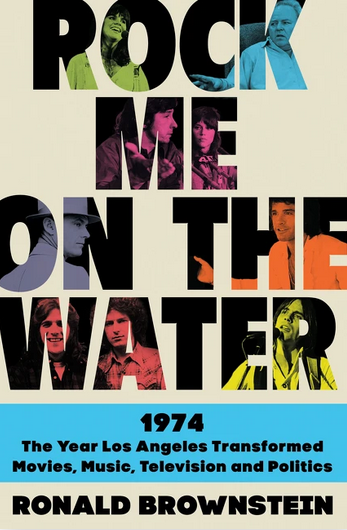 Norman Lear focused on “All in the Family” because he needed a TV hit after a series of whiffs. Roman Polanski accepted the director’s chair for “Chinatown” because he was in a success slump. In search of a wider audience, the Eagles’ leader, Glenn Frey, consciously sharpened the band’s country-rock sound.

There’s a uniquely American thread winding through the pages of Ronald Brownstein’s excellent new social history, Rock Me on the Water. The changemakers he profiles by and large wanted popularity even as they fought the system. These aren’t a bunch of Paul Gauguins willing to toil away in obscurity for the sake of art. It’s capitalism, baby!

Scholars love to debate which is the great American novel, whatever that means. However, an equally interesting challenge would be to name the great American nonfiction book. (Joan Didion’s writing comes to mind as a good place to start.) Brownstein’s work may not be as ambitious in scope as some bigger nonfiction works, but he makes a strong case that “the dynamics that rejuvenated culture and politics in Los Angeles reached their fullest expression through 1974.”

For one, what a year it was for film. In addition to the aforementioned “Chinatown,” Warren Beatty starred in “Shampoo,” Francis Ford Coppola gave us “The Godfather Part II” (a project he only took after being swayed by a massive payday), and Steven Spielberg’s “Jaws” changed the very trajectory of Hollywood by establishing the summer blockbuster and marking a return to form in Tinseltown with “big, throwback popcorn movies,” as Brownstein puts it.

Musically, the Laurel Canyon sound was in full flower. Joni Mitchell was astonishing peers and critics (and, to a lesser degree, record buyers themselves) with her stunning talent. Crosby, Stills, Nash & Young launched a mega-stadium tour that presaged arena rock. Jackson Browne and Linda Ronstadt hit the charts with critically acclaimed works.

And while London had been “where it’s at” for music since the late 60s — with the Beatles clearly atop the pyramid — the scene in Los Angeles was more small-D democratic in that no one act dominated and performers worked closely together and supported each other.

Brownstein’s at his best in the film and music sections of the book. This might be because he speaks to performers like Ronstadt and Browne extensively throughout the music chapters, while in the TV section, he spends most of his time with writers and directors. Each gives their own interesting insights, but personally, I’d have liked to hear more from the actors.

But this is a minor quibble because the TV sections are, in fact, very interesting. It’s fascinating to hear how CBS crafted its famous Saturday line-up of “M*A*S*H,” “All in the Family,” “The Mary Tyler Moore Show,” “The Bob Newhart Show,” and “The Carol Burnett Show,” often dubbed the greatest night ever in TV history. Equally interesting are the portions toward the end of the book detailing how incredibly white and male TV writing, directing, and production remained despite some small gains regarding topics and the people featured onscreen.

Remember Family Hour? It came about in 1974 as conservatives railed against TV’s embrace of once-avoided topics like abortion (such as when 47-year-old “Maude” chooses to get one in her “All in the Family” spin-off). The idea was to push controversial topics to 9 p.m., reserving the 8 o’clock hour for supposedly more wholesome stuff. Brownstein reveals a cynicism here: CBS was keen on the idea in part because it thought the change would hurt ABC’s action-oriented line-up.

Brownstein makes a pretty good case for Los Angeles’ impact on the national political scene, too. Being born and raised in DC, I’m a little myopic regarding our own town’s supremacy in this arena, but Brownstein does a nice job reminding us how influential the Left Coast has been on American politics and social beliefs. For example, he ably demonstrates how the historic election of Tom Bradley as L.A.’s first African American mayor was partly fueled by the remnants of George McGovern’s disastrous 1972 presidential run.

There’s no way to definitively prove whether 1974 L.A. was as important as Brownstein claims, but he’s made a strong opening argument. And here’s an even bigger compliment: Rock Me on the Water makes me wish I could hop in a Tardis and travel back in time just to hang around all those groovy people doing all those groovy things.

Where the Water Goes