In this quiet, tightly woven tale, a middle-aged Kiwi gambles that he’ll be able to make a new life in post-9/11 London. 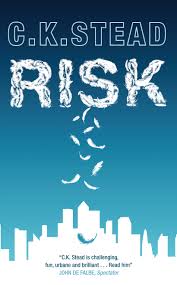 Sam Nola, a commercial lawyer, divorced, with two nearly grown sons, uproots himself from job, family, and friends in New Zealand and returns to London, where he spent two freewheeling years after university. Risk, by C.K. Stead, is primarily a psychological study of Sam as he builds a life in London, determined not to give in to loneliness and go home.

Sam is a modest, likable man with a quiet sense of humor and great affection for his sons and newly discovered French daughter, Letty. He is well educated in literature as well as law. He does not lack confidence in his abilities, but he has put himself in an uncertain situation that demands patience and courage, and he sometimes wavers.

Sam finds a good position with an investment bank. He makes new friends, including his landlady’s cat and a 9-year-old boy for whom he babysits. He takes in movies, plays, and operas. He gets raises and bonuses. He travels in Europe.

The main question of the book is whether Sam can endure the loneliness and the feeling of not belonging in London as he tries to get established. Stead introduces the question with humor. Sam is reading Alphonse Daudet, learning French to please Letty. In one of Daudet’s stories a goat yearning for freedom breaks out of her shed, only to be eaten by a wolf. Sam identifies with the goat and wonders what wolf might induce him to give up and go back to New Zealand.

Throughout the story Sam’s mind turns up literary references and other motifs that parallel his situation. There is Philip Larkin’s man who “chucked up everything and just cleared off”; Rastignac, the hero of Balzac’s Père Goriot, who does not give up after failing to break into French society; and, from a joke of Letty’s, the man who prayed to God to win the lottery, until God finally told him to buy a ticket.

These thoughts seem to give Sam psychological support in moments of low spirits. Stead orchestrates them with a masterful hand, creating a symphonic structure. Sam is often introspective, yet he is by nature and by effort outward looking, and the novel reflects that. The book begins in the shadow of 9/11 and moves to the looming invasion of Iraq, which Sam and his friends oppose.

Stead also examines several love affairs in Sam’s life that have ended in missed opportunity or failure. One was with Simone, Letty’s mother, who returned to her fiancé in France without telling Sam she was pregnant. Another was with Maja, a distant cousin with whom he fell in love during a trip to Croatia while he was still married and living in New Zealand. On a second visit, he realizes that he should have left New Zealand then, to make a new life with Maja, who is no longer available.

The last section of the novel, aptly titled “The Clusterfuck,” takes Sam to the 2008 financial collapse. He experiences a setback, then a shock. Once again he faces big choices. Stead leaves the reader to decide whether Sam will make a new leap or stay with the life he has made.

While Sam is the main focus of the book, Stead takes us away from him in two short chapters. First we meet David Kelly, the arms inspector who revealed the bogus nature of claims that Saddam had weapons of mass destruction. Then Stead takes us to Tony Blair as he plans a comment on Kelly’s suicide. These digressions work because they illustrate the feelings of Sam and his friends, who talk about and demonstrate against the invasion of Iraq.

Stead devotes much attention to the character of Tom Roland, a poet and bond trader at the bank where Sam works. These dives into Tom’s consciousness are woven through the book, not as digressions, but as a kind of counterpoint to the main plot. Stead immerses the reader in Tom’s creative process. That Stead is a poet of some stature lends authority to these scenes, but their connection to Sam’s trajectory is only suggested.

This book is an example of the vivid yet economical writing found in Stead’s earlier novels. Although the book is short, he never rushes. Between the more dramatic moments, Sam has time to take walks and observe his surroundings. Stead describes the settings and characters with many details yet with great efficiency.

Alice V. Leaderman writes fiction, hikes, skis, gardens, and volunteers with a group that promotes the use of native plants. She lives in Maryland with her husband.

By A. Igoni Barrett

A "complex depiction of the buffeting forces of Nigerian life and the allure of dreams."