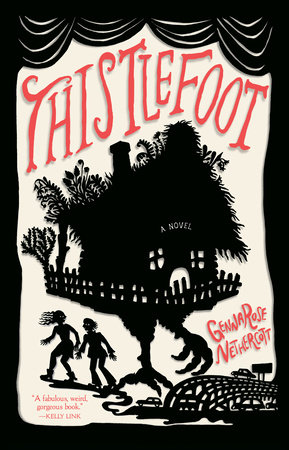 “If a story does its job, it doesn’t ever end. Not really. But it can change. This is the nature of folktales. They shift to fit each teller. Take whatever form the bearer chooses…It can become an offering. A lantern. An ember to lead you through the dark.”

Most of us have received strange gifts in our lives. Odd gifts. Quirky gifts. Gifts that we had no idea what they even were when we opened them. Gifts that showed no awareness of actual tastes, hobbies, or interests. Gifts that were so perfectly personalized, there was no way to show gratitude.

But it’s likely we’ve never been gifted a sentient house on chicken legs called Thistlefoot. This is the name of both GennaRose Nethercott’s extraordinarily rich, layered debut novel and one of its main characters, which, again, is a sentient house. On chicken legs. (And no, the house doesn’t speak — that would be ridiculous. But the story is told from its point of view on occasion.)

A mysterious grandmother from Russia bequeaths Thistlefoot to Bellatine and Isaac Yaga, estranged siblings living in a slightly different version of our contemporary United States, where magic is not uncommon, some people have mystical powers, and nobody bats an eye at a poultry-esque home lumbering down a lonely stretch of highway.

But it is also a recognizable America, one where layers of resentment still create divides between north and south and rich and poor; between immigrants from different points of origin; and between factions whose version of history is the “correct” one. So, make no mistake — despite Thistlefoot’s brilliantly whimsical opening premise, the novel features an outstanding, inventive narrative that uses global folklore to examine not just the stories we tell each other but the ones we tell ourselves.

Readers are never told what precisely drove a wedge between Bella and Isaac; it’s not central to their story. What is central to that story — and to Thistlefoot’s — is how they work to heal from that wedge. Isaac possesses the uncanny ability to physically and mentally mimic others. He uses it to make a living as a sort of street entertainer, stealing wallets and identities at will, imitating people so well that he occasionally disappears into the other personality (when he does, his small black cat, Hubcap, is there as an anchor). Isaac revels in his powers even as they drain him.

For her part, Bella possesses a magic she describes as the “embering,” which she initially suppresses because of a childhood trauma over her ability to set things on fire. It’s only later that she discovers her gift has an incredibly wide range of uses.

The Yaga siblings agree to take Thistlefoot on a last tour of America — performing along the way the puppet show they used to put on with their parents — and then sell the place afterward. All the while, they’re pursued by an enigmatic being known as the Longshadow Man (his name strikes a strident chord when we realize who he actually is) determined to destroy both the siblings and Thistlefoot and to erase all recollection of a specific tragedy from human history that the house witnessed and that Isaac and Bella carry the memory of in their blood.

The simplicity of Nethercott’s premise belies the richness of her work. She has crafted in Thistlefoot a quirky and heartbreaking journey through time and space that not only engrosses readers but reminds them what it means to be part of a story — particularly one as important as is shared here.

Stories about stories are my favorite kind of stories. They are also remarkably tricky to execute, but the author employs her own brand of magic to create a new mythology that will live in your mind as if it’s always been there. She recognizes that stories mean different things even to the people in them, and that they help define us as individuals, as members of groups, and as participants in (or observers of) historical events.

Tragedies are stories too, of course, and leave their own jagged scars across the face of history. But to forget them, Thistlefoot suggests, is an unspeakable crime. You must protect your own story, no matter what. You write books about it. You invent plays with magical puppets. You never, ever forget your story because, without it, you are incomplete. You may start as a ghost but — in GennaRose Nethercott’s world, at least — will blaze into a conflagration of power and remembrance by embracing all the parts of your past, present, and future.

Patricia S. Gormley recently moved to Alexandria, Virginia, from Miami, and she is still waiting for an explanation of “fall.” She lives in NoVA with her librarian husband and five small, mysterious beings who claim to be cats but who Patricia now believes are wee furry aliens sent to observe the human race.