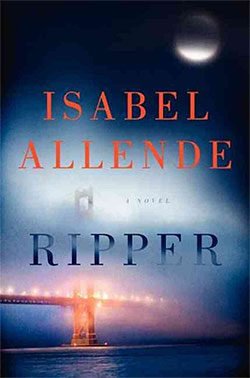 Isabel Allende has turned to crime. After a dozen novels, four memoirs, and three young adult novels, and with an international reputation for her magical realist and historical works, Allende has committed a crime story. It features several of the key ingredients of contemporary crime fiction, including the appearance of grisly corpses imaginatively dispatched and a police force one step behind the plucky female hero.

The novel is set in foggy San Francisco and is constructed around three interlocking narratives. Amanda Martin, a high school senior bound for MIT, heads up a group of misfit teenagers from around the world dedicated to online playing of the game “Ripper.”

When a security guard is found dead and sodomized in an elementary school, Amanda and her group abandon their obsession with the Jack the Ripper case to delve into what soon becomes a series of seemingly random murders. Thanks to their wit and ingenuity, the sleuths piece together the links between the crimes, which lead them close to home.

They are aided in their quest by Amanda’s father, Bob Martin, the deputy chief of police. Long divorced from Amanda’s mother, Bob routinely feeds inside information from the investigations to Amanda and her grandfather, a Berkeley philosophy professor who also seems to feel no qualms about sharing the gruesome details. While the bodies pile up, Amanda’s mother Indiana Jackson, a drop-dead beauty who runs a holistic healing service, finds herself torn between two men: a rich ne’er-do-well playboy and a rugged ex-Navy SEAL with a prosthetic leg and a nearly bionic dog. In fact, virtually all of Indiana’s clients, male and female, long to sleep with the beautiful divorcée.

In addition to these broadly drawn characters, Ripper is stuffed with San Francisco stereotypes. From the cross-dressing gay waiter to the artist who grows pot in a secret garden atop Indiana’s building, they are all a bit larger than life, introduced with long and exhausting backstories. At different plot points all but one prove to be red herrings. (There’s even a private dick who is the son of a journalist who was “immortalized in the detective novels of William C. Gordon.” That Gordon is Allende’s real-life husband.)

It’s not just the characters who are crowded into the narrative: the prose is often packed with facts and research that slow down the story. Dozens of paragraphs read like background notes. Take this paragraph drawn at random:

“Lying facedown on the massage table, Ryan Miller was dozing under the healing hands of Indiana Jackson, a first-degree Reiki practitioner, well versed in the techniques developed by the Japanese Buddhist Mikao Usui in 1922. Having read sixty-odd pages on the subject, Ryan knew that there was no scientific proof that Reiki was actually beneficial, but he figured it had to have some mysterious power, since it had been denounced by the US Conference of Catholic Bishops in 2009 as dangerous to Christian spiritual health.”

One is tempted to think that there is a touch of the opera buffa about all this, some tongue-in-cheek approach to the brilliant daughter, the gorgeous mother, the cynical father, and the spate of usual suspects, but unfortunately it all seems in earnest. Problems of tone and pacing constrict the story. There is no ripper in Ripper. Make no mistake, there is a psychopath behind the serial killings, and the novel picks up the pace after the first 300 pages, but for this reader, the punishment doesn’t fit the crime.

Keith Donohue is the author of three novels, including The Stolen Child. His new novel, The Inside Boy, will be published this fall.