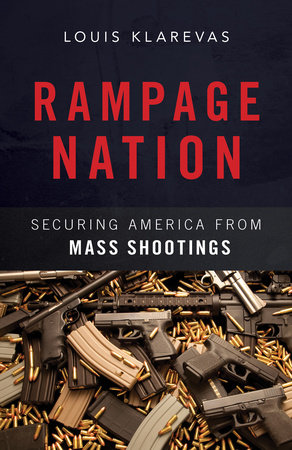 Just to be clear, I was a member of the NRA when I was a boy. I learned gun safety, hunting etiquette, and how to prepare game for a meal — all elements of honored traditions passed between generations. Explicit in that education, however, was the knowledge that with the freedom to own a gun came an equal and revered measure of responsibility and restraint in the use of it. Today, mass shootings stand in stark contrast to that sober measure.

By examining historical and recent mass shootings, Louis Klarevas, a professor at the University of Massachusetts and a national-security consultant, asserts that gun massacres pose an unacceptable public-safety risk in America.

His Rampage Nation: Securing America from Mass Shootings is not strictly an academic tract, although there are 79 pages of notes and attributions. Nor is his book a polemic. Distinctively, however, the author prefaces each chapter by coupling his research on gun violence with heartbreaking narratives of horrific gun assaults like those in Akron, Ohio, by Michael Hance and Fort Hood, Texas, by Nidal Hasan.

Klarevas introduces the reader to mass shootings, beginning with his own first-hand account of a shotgun attack at a Greek taverna by an aggrieved and unstable fisherman. With this anecdote, the author frames his approach to shooting massacres, arguing that all “acts of violence involve a combination of ill intention, vulnerable victims, and harmful capabilities,” his “trinity of violence.” Without one of these elements, there are no mass-shooting victims.

Often addressing us in the second person in these stories, he walks us, for instance, down the halls and classrooms of Sandy Hook Elementary School as Adam Lanza sprays automatic fire at adults and children alike. I teared up, yet I could not stop reading.

Klarevas does not sensationalize the intimate details of such mass shootings; he puts us wincingly in the midst of sensational violence. He humanizes essentially dehumanizing violence so that the abstract argument about guns is tethered to fatal and bloody carnage.

His analysis is organized in three sections: the problem and definitions, the history and contextual basis of gun violence, and proposed solutions.

In the first section, Klarevas articulates a middle position between opposing political positions and partisan definitions about what actually constitutes mass gun violence. He demonstrates that both the political left and right employ shaky datasets to determine the incidence of mass shootings in the service of often simplistic and unexamined and competing slogans. Then he parses those partisan definitions to arrive at a broader interpretation that incorporates fatalities and injuries, domestic violence, criminal activities, and terroristic acts over multiple sites by multiple shooters.

In support of his analysis, Rampage Nation is replete with tables and graphs that depict the increasing number and widening scope of gun massacres. His inescapable conclusion is that “no single incident of violence has killed more people in the United States than mass shooting.”

By profiling mass-shooting perpetrators like Dylan Roof at the Emanuel A.M.E. Church in Charleston, South Carolina, the author describes men with demonstrated mental instability and perceived “ego-threats, who undertake a calculated retaliatory attack with available weapons.”

Significantly, Klarevas describes how “the possession of weapons often changes the manner in which a person channels his aggression.” Research reveals the dynamic by which the gun provides the “priming” for aggression; in other words, the “gun helps pull the trigger.”

Next, Klarevas examines the history, the ubiquity, and the characteristics of weapons of mass killing, specifically the AR-15 assault rifle and semi-automatic handguns. Constructed of polymer with large-capacity magazines, these guns are “the force multipliers when it comes to kill potential.” Jared Loughner, firing his Glock-19 handgun 33 times in 15 seconds in a shooting spree in Tucson, wounded congresswoman Gabrielle Giffords and 13 others and killed six bystanders.

Finally, in the last leg of his trinity of violence, the author suggests legislative initiatives to deny weapons to those who would do harm. “The biggest takeaway from American’s experience with a ban on assault weapons and extended-capacity magazines is that gun control can save lives.”

He cites Great Britain and Australia as examples of countries that have reduced if not eliminated mass shootings with laws and buybacks. “If we are looking for certainties, there is only one: a bad guy without a gun is always better than a bad guy with a gun.”

While Klarevas is aware of the constitutional challenges implied by his recommendations, he suggests that common-sense approaches can preserve the right to bear arms and increase public safety. Among a number of his remedies, the author favors banning and buybacks of all extended-capacity magazines.

He suggests expanding those prohibited from possessing guns to include people with lower-level criminal violations and mental-health issues, particularly with regard to domestic abuse. He proposes extending the background-check period from three to 15 days before a gun buyer can complete a transaction, and he advocates the use of gun courts with experts in behavioral science, the Second Amendment, and guns.

Rampage Nation, then, portrays mass shootings through compelling research and by effectively connecting the reader to victims of mass shootings, their deaths, and their trauma. Klarevas holds that a balance of individual rights to possess guns with the common good through gun restrictions is achievable and necessary to prevent a uniquely American tragedy — mass shootings.

I am no longer a member of the NRA of my boyhood, and the honored gun traditions of my youth seem hopelessly anachronistic today. Yet, Louis Klarevas has spoken to me in his often poignant and urgent call for national responsibility and national restraint that gun ownership demands.

Anatomy of a Genocide