A tour-de-force autobiography from one of baseball’s greatest hitters. 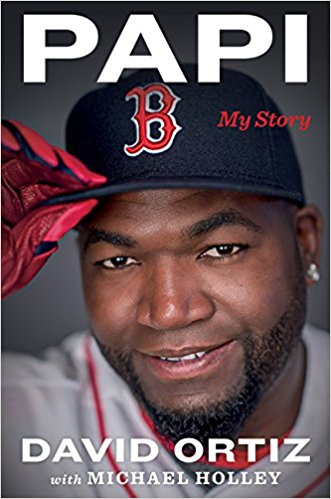 Baseball has seen its share of greats, many of them bearing appropriate nicknames; Babe Ruth (the Bambino), Joe DiMaggio (the Yankee Clipper), Ted Williams (the Splendid Splinter), and Lou Gehrig (the Iron Horse). In recent history, though, one man stands head and shoulders above those of the modern game, both literally and figuratively: David Ortiz, better known as Big Papi.

His delightful, compelling, and engrossing new autobiography, Papi: My Story, is like the man himself: big, bold, and brash. Devotees of Red Sox Nation are sure to embrace it — much like Ortiz embraces his adopted city of Boston — but so, too, will all fans of the game, no matter the team to which they pledge allegiance.

Ortiz, never one to shy away from speaking from his heart and telling like it is — most famously when he dropped an F-bomb during a pre-game ceremony in Fenway Park in the wake of the Boston Marathon Bombing in April 2013 — leaps from these pages as larger than life and brimming with infectious enthusiasm for the game, Beantown, his family, and those with whom he felt privileged to play. In doing so, he lays bare his soul in a book that includes remarkable pathos and glorious humor.

Readers will journey with Ortiz through his childhood in the impoverished Dominican Republic, the Caribbean nation, home to many big leaguers, where he fell in love with the game and grew up with a singular devotion to his father. The trials and travails of minor-league baseball followed before he entered the big leagues with the Minnesota Twins.

Even though he put up strong numbers for the Twins, he was deemed expendable and traded to the Red Sox. It was a fortuitous swap both for himself and for Boston, for it would be Ortiz who would lead the Red Sox to their first World Series championship in 2004, ending an eight-decade drought.

Ortiz and the “band of idiots” finally brought the long-coveted title to New England at the end of a season which saw a reverse sweep in the American League Championship Series when the Sox, down three games to one, bested arch nemesis New York Yankees to get to the Big Show. Once there, the Red Sox dominated the St. Louis Cardinals — mostly behind the bat of Ortiz, the team’s designated hitter with a penchant for launching one over the wall when a homerun was most needed.

Perhaps what is so striking in this story, though, is just how much a student of the game Ortiz proved to be, studying pitchers constantly to see how he could get an edge on them. In the off-season, Ortiz would watch videotapes of players for hours to learn and then mentor other players who shared the Red Sox clubhouse.

Of interest, too, is the discussion Ortiz has about big-time baseball salaries. Though he was in the stratosphere of elites when he played the game, he was always locked in disputes with the Red Sox front office and management. While admitting that he is a multimillion-dollar player, Ortiz has no love for the “business aspect of the game,” a common refrain in the sports world, and he holds nothing back in his belief that owners and general managers often put the franchise before the player.

A 10-time All-Star, three-time World Series champion, and a member of the vaunted 500-homerun club, Papi was a player like no other. And Papi, a marvelously told story of his love affair with the game, is a must-read for baseball fans everywhere.

James A. Percoco is the author of Summers with Lincoln: Looking for the Man in the Monuments and is the Teacher-in-Residence for the Civil War Trust and enjoyed a 32-year career as a high-school history teacher. He is a member of the National Teachers Hall of Fame.