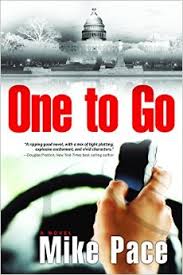 Deux ex machina is not only a literary device, but also a theme in this unusual genre-crossing novel. Billed as a paranormal thriller, One to Go raises suspense by manipulating readers into wondering if the supernatural occurrences and personages perceived by the central character are hallucinations, hoaxes, or true manifestations of the spirit world — both godly and ungodly.

Tom Booker’s high-pressure life as an underling lawyer in a world-class DC law firm pits the demands of the firm against his responsibilities as a father. The pressure has already ruined his marriage, but he is trying to hold onto his relationship with his 7-year-old daughter. Maintaining two households and paying alimony have compromised Tom’s lifestyle, and he often has to make excuses when his promises to young Janie are sacrificed to the demands of his superiors at the firm. To deal with these pressures, Tom has been relying on liquor way too much.

As the story begins, Tom is supposed to bring his daughter and her friends to a field trip. Delayed by running into the head of the law firm on his way to the office garage, he is fearful about how angry his ex-wife, Gayle, will be if he once again doesn’t come through.

Traffic conspires against him, too, and Tom is surprised to see the girls in his sister-in-law’s minivan. Wondering about a change in plan, Tom is forced into an accident. He awakens after a blackout to see the minivan teetering on the edge of the road and about to fall into the river. Janie’s face is pressed against the window.

Oddly, everything is frozen is time. Smoke from a conflagration doesn’t rise. The vehicle doesn’t fall. Suddenly, two young adults, Chad and Brittany, appear, flippant and smug. They are the instruments of Tom’s destiny, and they offer him a life-or-death decision.

If he agrees to murder four individuals within two weeks, the pair will trade Tom’s victims for those who would otherwise die in the crash. They can “rewind” the future now on hold. If Tom doesn’t choose who will die, then Chad and Brit will decide. These two, perhaps the devil’s agents, present a moral test for Tom. He agrees to the bargain, hoping he can find a way around it and still save Janie.

At first, it’s possible for readers to feel that these characters are hallucinations, projections of Tom’s guilt and fear brought on, in part, by the trauma of the accident that had rendered him briefly unconscious. Or maybe he has fallen into a nightmare and will soon awaken.

More and more, however, we are asked to accept the possibility that the young duo is from the spirit world, demonic interlopers in the story of Tom’s fate. How will Tom satisfy these demons? His decision to murder — if he must — only the most despicable criminals leads to a number of harrowing episodes.

While the interaction between two planes of being illuminates Tom’s acute moral dilemma and frantic plans of action, there are other plot strands that will also rivet readers. For example, Tom is arrested and charged with the murder of an attractive young woman who has thrown herself at him. How this comes about and how Tom and his lawyer, the gorgeous and intelligent Eva, attempt to prove his innocence reveal the author’s experienced grasp of the legal process. Indeed, crisply described court proceedings and defense preparations take up a good portion of One to Go.

The sure-handed employment of the DC setting will place readers inside Georgetown University’s Healy Hall, where Tom consults a Jesuit priest who will play an important role in the denouement of the novel. The fabled 1789 restaurant nearby is also on the action map.

Tom’s activities take him to a small town near Annapolis, to Arlington, to Anacostia, and through or near many DC neighborhoods and landmarks, including Naylor Gardens, Adams-Morgan, several government buildings, the Lincoln Memorial (for a very racy scene), and the National Cathedral (as you’ve never seen it before).

The author’s convincing presentation of those aspects of the novel that are grounded in reality creates a sense of verisimilitude that carries over to the fantastic elements, luring us toward the willing suspension of disbelief.

Perhaps, though, Pace doesn’t mean for us to be fully manipulated in that direction. He is having too much fun with his whimsical incarnations of angelic and demonic agents. Against the grimness and horror of Tom’s travails, the author sets a vaudeville flavor. Chad and Brit come across as a wise-cracking, show-biz variety act, self-conscious performers whose masks we don’t care to penetrate. Why ruin the show?

Educated, avid readers who like to contemplate momentous issues and encounter the worst horrors imaginable when they are safely distanced by the covers of a book (or the off switch of a tablet) will find plenty of both in the thought-provoking entertainment of Mike Pace’s One to Go.

A pinball chase animates latest “gonzo” tale of a deranged historian ― and serial killer ― in Florida.