On the Road with Del and Louise: A Novel in Stories

Buckle up for some kicks on Route 66 with two lovable outlaws. 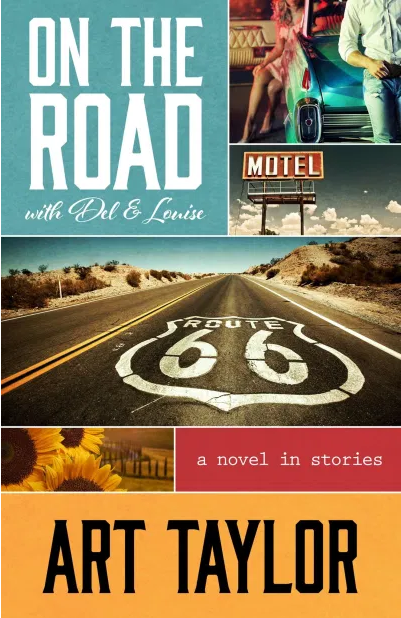 At an Inner Loop reading in Adams Morgan this summer, over the roar of a neighboring event, I listened to Art Taylor read from On the Road with Del and Louise. I hadn’t read any of his work before, but as soon as I heard these words, I knew I was going to be in for an interesting ride:

“I hadn’t been thinking about killing Delwood. Not really. But you know how people sometimes have just had enough. That’s what I’d meant when I said it to him, ‘I could just kill you,’ the two of us sitting in his old Nova in front of a cheap motel on Route 66 — meaning it just figurative, even if that might seem at odds with me sliding his pistol into my purse right after I said it.”

As I listened to the story of how Louise met and fell in love with Del — she was working behind the counter at the 7-Eleven he robbed for tuition and academic expenses — I was hooked. It wasn’t just the “Raising Arizona”-style absurdity of the situation, but also Louise’s droll reaction that got me: “I laid the Cosmo face down on the counter. I didn’t want to lose my place.”

Louise then proceeded do what she could within the circumstances to make sure she would meet him again: “I thought that he had a nice voice, and then I told him so. ‘You have a nice voice,’ I said. ‘And pretty eyes.’ I gave him my phone number, not writing it down because the security camera would have picked that up, but just told him to call, repeating the number twice so he would remember it. ‘And my name is Louise.’”

Well, Louise’s technique sure worked on me. I knew I wanted to hear more of her sly, folksy-but-not-dumb way of speaking and seeing the world, and I enjoyed following Del and Louise from New Mexico to California to North Dakota and back in Taylor’s stories.

The thread connecting the stories is the couple’s desire to put Del’s life of crime behind them and start fresh. But, of course, they keep getting caught up in situations that pull them back into questionable activity: a new career in real estate with Del’s sister in Victorville goes awry; a wine caper in Napa Valley takes an unexpected turn; and an attempted wedding in Las Vegas zanily morphs into a hostage situation.

Another story covers more serious territory, and the way Taylor balances that challenge with the couple’s wacky history is reminiscent of the dark undertone to “Thelma and Louise” — although perhaps because Taylor doesn’t start with that shadowy underpinning, his dip into seriousness in the midst of mirth does throw one a bit. But nobody goes driving off a cliff here. Taylor lightens the mood again in the last story, a frothy whodunit about a wedding ceremony that somebody doesn’t want to see happen.

Each of the stories could stand on its own, and together they follow a solid narrative progression. With this format Taylor gives himself the task of introducing the characters anew in each story, which he does with a sufficiently light touch that it doesn’t become repetitive.

Sweet, endearing, charming, quirky, a delightful romp: all these words come to mind while reading this novel. At moments toeing the edge of the saccharine divide, Taylor infuses enough humor into the stories to keep them from going over.

I often found myself smiling and shaking my head at Louise’s unique perspectives, such as at her first wine-tasting, with a sommelier named Trevor: “‘It’s got a sweetness to me, almost like —’ I looked at Trevor. ‘It may be silly to say, but it’s almost like a Krispy Kreme doughnut, the way that glaze is sweet and crisp at the same time.’”

After the tasting, the couple’s latest plan leads them to the darkest dive bar in town: “If that first winery we went to was upper-crust, the bar in Napa was sure the bottom of the pie.” And we’re off to the races again.

Del and Louise are two of the nicest folks you could ask to be on the lam with. A zany road trip with wry humor and sweet moments, On the Road with Del and Louise is an enjoyable adventure.