The Search: A Novel 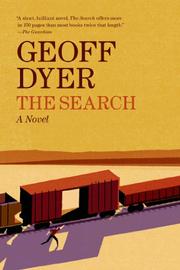 The Search was originally published in England in 1993. Twenty-one years offer countless opportunities for a novel to lose its cultural grip, but while The Search is undoubtedly a book from the early nineties — no cell phones, no web searches, no GPS devices — it manages to sidestep any distracting timestamp by creating a dreamlike reality where technological and cultural concerns are rendered moot. This is not our world; this is Geoff Dyer’s world, and readers will be thrilled by it.

Dyer’s first novel, The Colour of Memory, follows a cast of down-and-out twenty-somethings in Brixton. The book echoes the counterculture charm and bohemian hijinks of Richard Fariña’s Been Down So Long it Looks Like Up to Me and Jack Kerouac’s The Dharma Bums, but it is mostly concerned with creating a portrait of 1980s South London. There, the characters are merely a function of the setting, and not much happens. One character, Freddie, seems to sum up the author’s views when he says, “Generally the plots are the worst thing about books.” In The Search, Dyer shows that he is fully capable of plotting, and more.

Walker, our protagonist in The Search, is a loner with a penchant for “tracking,” something akin to illegal bounty hunting. Walker meets Rachel, and she quickly commissions him to find her wealthy husband, Mallory, who’s been missing for several months, presumably due to some illegal doings. Rachel needs Mallory to sign documents that will secure her financial well-being in the event Mallory is arrested.

With only fragments of a trail to follow — an old address, a phone number, and a postmarked envelope — Walker begins his chase through an invented country with a sprawling geography that vaguely resembles the United States. The cities’ names reflect the dreamlike everywhere/anywhere aura that haunts Walker’s pursuit: Durban, Kingston, Meridian, Iberia, Usfret, Despond, Horizon, Independence, Crescent City. These aren’t real places, but they sound and feel much like our own familiar landscapes.

All of Walker’s initial leads slowly dissolve and Mallory’s trail goes cold, until Walker is basically tracking on intuition. In Usfret, Walker thinks he spots Mallory in a public crowd, a scene palpably suffocating with claustrophobia. “The crowd was not uniformly dense and as long as you abandoned all volition and went where the crowd willed, a degree of movement was possible.” He loses the man he thinks is Mallory and keeps searching, city after city, through monsoon-esque downpours and seedy motels. He steals cars, hitchhikes on trucks, and jumps a freight train in a scene rendered so beautifully that any reader with romantic notions about freight-hopping will melt.

Walker’s resolve becomes more about maintaining the momentum of searching for Mallory than actually locating the man. “The prospect of being so close to Mallory should have excited him but Walker felt oddly deflated, as if he hardly cared.” The narrative tone likewise shifts from a typical mystery to something unearthly and strange.

The book completely jettisons realism when Walker bicycles into an abandoned town and loots shops and homes for supplies. The shift in mood is subtle, as previous chapters have slowly developed this eeriness, but the ghost village is where readers’ expectations and preconceptions are fully chucked. When Walker leaves the town and continues his search, there is no acknowledgement of the oddity that he has just paraded through. This transition casts its shadow backwards and makes earlier scenes, like the crowds at Usfret, appear darker and more fantastic in retrospect. With its narrative shape fully reformed, the book pleasantly jolts into a new reading experience.

Each subsequent city is distinguished by its own bizarre metaphysical rules. Horizon is comprised of a single enormous building. Independence has been frozen in time like a movie scene on pause. Walker lingers in Despond as if coerced into lethargy by some hypnotizing force, a nod to Circe in The Odyssey. But if Walker is Odysseus, what’s his Ithaca? “He thought of people who spent their lives tracking down the Abominable Snowman or the Loch Ness Monster. The whole point of these things was that they existed only in sightings. You could never get scientific proof of their existence. That was their purpose: they were a lure, a metaphor for the Himalayas of the unknown. As soon as the ‘Yeti’ was sighted it would cease to exist.” The search becomes self-perpetuating.

Walker’s trek through imaginary cities never seems hackneyed or silly. It recalls the alternate realities of Jorges Borges’ Labyrinths, Alan Lightman’s Einstein’s Dreams, and David Markson’s Wittgenstein’s Mistress. In the Afterword, Dyer cites Italo Calvino’s Invisible Cities as a direct influence on The Search. These narratives linger on the periphery of The Search, but Dyer’s novel is entirely its own breed of weird.

At first, The Search seems like a hardboiled detective story that doesn’t deviate from predigested plotlines and characters, but as the narrative drifts into an unreality that evades categorization, readers will be delighted by Dyer’s inventions, not to mention his economy, with a book that weighs in at a scant, magnificent 176 pages.

Nathan Blanchard’s work has appeared in District Lines and McSweeney’s Internet Tendency, and he regularly contributes web content for the Potomac Review. He enjoys eating at Mexican restaurants with his wife.

The Lost Sisterhood: A Novel

Parallel journeys by an Oxford lecturer and a North African priestess separated by time lead to the “real” story of the Amazons.