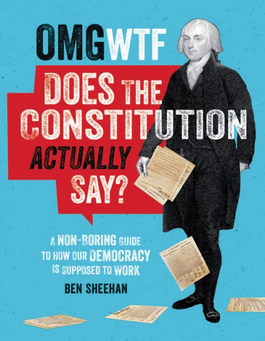 Sometimes, it’s helpful to be reminded of basic things you don’t often think about. For example, when the current president of the United States starts musing on Twitter about the possibility of delaying the upcoming election, you might ponder, “Oh, can we just pick a date? I thought maybe there was some document that mandates how we set the schedule for presidential elections?”

Thanks to Ben Sheehan for reminding us that document is called the U.S. Constitution. His new book, OMG WTF Does the Constitution Actually Say?, also reminds us that the subject document contains a whole host of exceptionally useful information about how this country is supposed to work.

As you might guess from the title, Sheehan takes a decidedly unbuttoned approach to explaining the language and meaning of the Constitution, while providing context, intent, and logic — such as it may be — behind each section, along with lots of other illuminating information.

For example, if you’ve ever wondered about the full line of presidential succession, which Congress sets, the author explains that it’s determined by the order in which cabinet positions were established, and he lists them along with the date they came into being. As he notes, if we ever get to number 18, secretary of homeland security, some really bad stuff has just happened.

And it’s interesting to consider that neither the speaker of the house, number two in line, nor number three, the senate president pro tempore — a largely ceremonial position currently held by Chuck Grassley, age 86, and once by Strom Thurmond, at 99 — needs to be a representative or a senator. You or I could be second in line for the presidency if only we could get a majority in the U.S. House of Representatives to vote for us.

He bemoans the fact that most schools don’t teach civics, a subject he describes as our “participation toolkit,” one that “isn’t some ditchable elective — it’s vital stuff.” Sheehan continues:

“It’s weird that a country that is run by ‘the People’ is full of people who don’t know how it runs…If we don’t know how our government works, it’s hard for us to hold our elected leaders accountable.”

He takes each section of each article of the Constitution one at a time, provides the full text, and then breaks it down in modern, digestible language. The Declaration of Independence gets a similar treatment. Even more helpfully, he sets up four useful notations for expanding beyond the text: BTW, FYI, IMO, and N/A.

Tellingly, many of the N/As — no longer applicable — deal with the Constitution’s extensive language related to slavery, such as fully half of Article IV: Section 2, which explains that any fleeing slaves must be returned to their owners, even if they made it to a free state.

Reading the entire Constitution — the preamble, seven articles, letter of transmittal, and the 27 amendments — is a reminder that context is crucial to meaning, no more so than in the discussion of the Second Amendment.

Though “2Aers” love to ignore that amendment’s crucial first two clauses, originalists like Antonin Scalia should have grasped what James Madison had in mind when he wrote, “A well regulated Militia, being necessary to the security of a free State…”

The word Militia is used twice in the first seven articles, and, as Sheehan notes, “Each time, ‘Militia’ refers to a supplemental army to the U.S. Army.” Clearly, its modern analog is the National Guard and Reserves, though the Supreme Court on which Scalia sat in 2008 took a far broader — that is, a far more liberal — interpretation.

An issue that hits close to home is Sheehan’s discussion of the Twenty-Third Amendment, which was ratified in March 1961 and finally gave residents of the District of Columbia the right to vote in presidential elections. Though his book came out before DC’s statehood bill finally passed the house for the first time ever this June, Sheehan makes a compelling case for its full passage. He notes that, in fiscal year 2018:

The case for continuing to disenfranchise tax-paying DC residents? Because the District would become a reliably blue state.

One would imagine that all leaders in a functioning democracy would want to do everything they could to encourage the highest level of voter participation. Unfortunately, that’s not the case in America, and every democracy-loving citizen should find this concept alarming. Sometimes, we forget that we are “We the People,” and that this is our government.

Between a raging global pandemic and lots of loose talk about rigged elections, this voting cycle is especially fraught. My advice: Tuck a copy of Ben Sheehan’s book under your arm and go vote like your rights depend upon it.

Jennifer Bort Yacovissi’s debut novel, Up the Hill to Home, tells the story of four generations of a family in Washington, DC, from the Civil War to the Great Depression. Jenny writes a bi-monthly column and reviews frequently for the Independent and serves on its board of directors. She also writes a bimonthly column for Late Last Night Books. Her short fiction has appeared in Gargoyle and Pen-in-Hand. Jenny is a member of PEN/America and the National Book Critics’ Circle. Previously, she served as chair of the Washington Writers Conference and as president of the Annapolis chapter of the Maryland Writers’ Association. Stop by her website for a collection of her reviews and columns, and follow her on Twitter at @jbyacovissi.