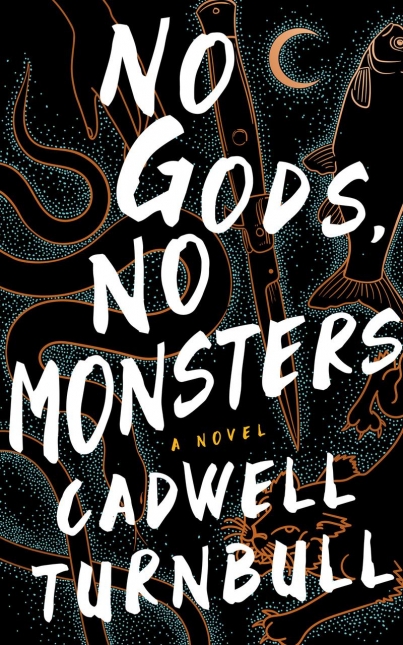 At first glance, No Gods, No Monsters seemed like the perfect novel for me: a sci-fi saga with a focus on relevant societal issues and a heaping side of heart. The author’s rapid perspective-shifting and multiple complex storylines, however, ultimately served to detract from — rather than add to — his story.

The book opens with a bang, and within a few pages, we’ve grasped the central premise: Monsters are real, but they don’t just walk among us — they are us. Laina, one of the main characters, experiences a traumatic event early on that explains and propels much of the narrative going forward.

After watching the beginning of a disturbing video showing a police officer repeatedly shooting what appears to be a “doglike…hulking animal,” Laina is even more aghast to see the dead beast morph into her brother, Lincoln, lying naked on the street. In her pain and confusion, she stumbles onto a secret world filled by others with extraordinary powers: invisibility, skin-shifting abilities, clairvoyance.

As might have been predicted by the last half-century of superhero movies, these powers are not limited to the good guys. The shadowy Order of the Zsouvox, which seeks “to come to understand the Beast-under-the-World and bend it to our will,” emerges at cross-purposes to those in Laina’s new fraternity, whom she holds increasingly dear.

Laina and her partner, Ridley, each find their own way to the Order of Asha but grow to have equally strong stakes in its survival. The reasons for Laina’s emotional loyalty are clear: These are the people who knew and cared for Lincoln in his last days and months, and she wants to align herself with them. It’s not as clear, however, what Ridley’s motivations are, though his love and respect for Laina are obvious, and the couple’s dynamic is one of the book’s most touching.

In a reflective passage about the complexities of an interaction with an old friend, Ridley muses about his relationship with Laina:

Even back then, up close, Marcus couldn’t understand Ridley’s asexuality. And now, at a distance, he’s getting it wrong again, assuming that it was Laina who had decided to have sex with other people because Ridley wasn’t interested.

But the truth is much simpler. Laina and Ridley had found each other exactly as they were, and loved each other still.

The storyline involving Laina and Ridley is the novel’s most prominent, but Turnbull intersperses it with several different perspectives all arcing toward the same outcome. While this does help the reader understand the global stakes of the conflict, the author’s habit of shifting viewpoints mid-scene can be jarring.

The writing zigzags from first person to third person too quickly to process easily. In this one four-paragraph span, for instance, Turnbull switches perspective four times, the first-person viewpoint emanating from a mysterious character invisible to the others:

It is a woman’s voice. Sweet. Not at all threatening. Laina is too stunned to speak.

I am just as shocked as she is. No one is there. No one has been there.

The voice sounds Caribbean. Laina has family from St. Lucia, and the woman’s voice sounds something like that, but also different. I recognize the accent because I’ve heard it all my life.

It may be that some of the mysteries in No Gods, No Monsters are answered in its planned sequels; any author of a series knows it’s just good sense to leave some riddles unsolved in the first book. But readers will have to decide whether they’re willing to wait for the payoff.