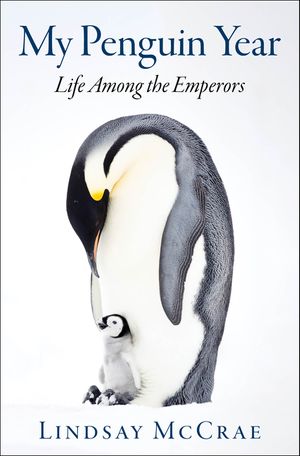 Lindsay McCrae’s My Penguin Year is his delightful and picturesque chronicle of the time he spent in Antarctica studying emperor penguins. For nearly a year, McCrae, a wildlife cameraman, faced extreme weather and profound isolation along with 11 others at a German base, missing the birth of his first child in the process.

It’s hard to recreate the visual splendor of a nature documentary on the page, but McCrae does an admirable job of it. Early on, he recalls a scene when the penguins return to the icy sea, describing them as “black shimmering specks,” and the air around him as “diamond dust.” Such vivid depictions exist throughout the book.

This isn’t to say that we aren’t given actual visuals; My Penguin Year includes dozens of pages of photos. And as engaging as McCrae’s text is, it’s hard not to be enchanted by pictures of baby penguins poking beneath their parents’ feathers, or moved by heartbreaking shots of chicks who perish in blizzard conditions.

McCrae ably outlines the sacrifices one must make for science. He portrays his wife, Becky, as a near saint for tolerating his missing the later months of her pregnancy, the birth of their son, and the infant’s early months of life.

He is also adept at cataloging the dangers he faces in trying to get needed footage. With temperatures frequently dropping to -50 Celsius, it is critical that teams travel in pairs or groups, with multiple layers of protection.

Nevertheless, several members of his team do suffer, if not frostbite, then at least “frost nip.” McCrae and his team frequently head out onto a frozen ocean whose ice, if it breaks, could bring death to the unfortunate soul who drops through.

Day-to-day preparation becomes a chore. Sledges filled with equipment regularly break, and the high-priced, highly technical cameras needed to secure the best shots must be specially tested and treated to function at such extremes. McCrae goes into great detail recounting all of this.

The author spends less time on the internal interactions of his crew and the impact of being part of a small team. It is perhaps key to one’s survival that everyone be tolerant of others in such a spare contingent. Individuals' quirks become magnified when you have few others with whom to socialize; patience and the ability to turn a blind eye may well be the only ways to endure.

And what of the penguins? Their lives are far from simple or safe.

Each year, the birds return to the same plot of ice to find a mate. Imagine for a moment the difficult journey through the frigid Antarctic to fulfill this biological imperative. Once arrived, the emperors search among the huddled masses to locate the ideal partner.

McCrae describes his impatience in awaiting the females’ laying of their eggs. With such a short window to film, bracketed by often-impassable storms, he must make full use of every second he is outdoors. He is committed to catching each moment of the mating cycle, and missing this critical portion would render his sacrifices useless.

Fortunately, he does capture the egg-laying, but then he and the penguins must experience the next step — the transfer of the eggs to the males, who protect them while the mothers go off to feed. McCrae documents this process and the drama that accompanies it. The fathers huddle together, protecting themselves and their eggs from whiteout conditions.

There is, of course, occasional tragedy: Not all the eggs make it. Some fall from their fathers’ feet onto the unforgiving ice. Others die in imperfectly formed shells. Still others perish shortly after birth. Nature offers no promises. McCrae describes and shares with us a picture of a dead chick covered in snow and ice, a victim of its environment.

The perils of nature, in fact, lead to the most dramatic moment in the book: A huddle of penguin parents and chicks ends up stranded at the bottom of a gully. McCrae and his cameraman debate what to do. Do they let nature take its course — and let these beautiful creatures face a brutal death — or do they intervene?

The team determines that to allow the birds to die would be unforgivable. They craft a ramp by which the penguins can escape and model for them how to use it. One gets the sense that this moment of salvation has made McCrae’s entire trip worth it.

Of course, McCrae can do little to save penguins from their most daunting threat: manmade climate change. Because of global warming, the patches of ice to which these birds return grow smaller each year. What will become of emperors in the future? The wonderful, eye-opening My Penguin Year may not provide the answers, but it could prompt readers to start asking questions.