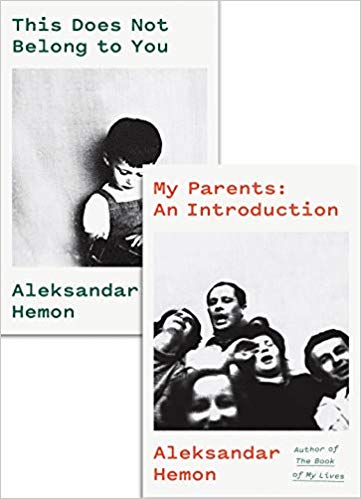 In This Does Not Belong to You, Aleksandar Hemon tells the story of a man who aspired to remember everything. Between 1972 and 1997, Robert Shields obsessively kept track of his dreams, bowel movements, and the times he scraped his feet with his fingernails. Shields did this because, as Hemon observes, “what was unwritten down did not occur; the writing erased that which was not written of.”

It is this fear of forgetting, of being erased from existence, that has driven Hemon to finally (in his own words) set about the task of writing a memoir of his parents. And if you’re wondering why a review of Hemon’s My Parents: An Introduction begins with a description of a scene from This Does Not Belong to You, it’s because the two books, while separated by titles, are really one.

Hemon’s work is unlike any other in the way it is organized. It is published flip à dos — one book is written on one side; another is printed on the other. Readers finishing one do not arrive at its physical end. Instead, they find themselves in the middle of a collection of uncaptioned photographs before coming face to face with the upside-down text of the other book.

The story of My Parents does not follow the rules of plot. There is nothing in the way of narrative tension. There is no single narrative thread. Instead, chapters are divided by theme. Each explores how the Hemons view different subjects by way of summary explanation, and, at times, anecdotes.

The Hemons, we learn, are an average family in the way that no families are ever average. They have their own unique set of quirks. Hemon’s father is an apiarist. He is also part of a family singing group that produces a CD of traditional Ukrainian folk songs. His mother is fond of animals. She talks to them in her native Bosnian, convinced they understand what she says. She cares for them, as Hemon points out, because “they need everything, which allows her to keep giving.”

His mother, like many mothers, has a big heart. The parents’ personalities coalesce in humorous situations, like when the father finds himself in an ongoing feud with troublesome racoons in their back yard. Hemon’s mother ultimately puts the battle to rest by convincing her husband to let them be.

The Hemons are like many immigrant couples from conservative backgrounds. Their relationship is a “gendered division of labor and duties.” His mother performs the cooking and cleaning, while his father works with tools and undertakes outdoor projects.

Collectively, the Hemons have a zero-waste attitude toward food and have what can only be described as an obsession with bread. Both mother and father frown upon fine dining; they feel more at home at all-you-can-eat buffets.

The expository nature of Hemon’s approach to writing can be frustrating. Often, important moments are brushed over via quick narration, with little to no attention given to setting scenes. For instance, at the beginning of the narrative, Hemon mentions a family trip to Kinshasa and writes that everyone “had the time of their lives.” Yet, he never divulges any information about the journey itself.

Hemon’s choice to break with convention over scene setting is a deliberate one. There are moments the author purposely alludes to and then omits, letting us know these events occurred but, in a nod to the title of the other book in the project, they don’t belong to us.

To write a biography of one’s living parents is to write a book of subjective observations. Anything anyone writes about their parents is always, inevitably and inherently, subjective. No matter what biographers do to separate themselves from their subject matter, their telling of the story will be colored by their relationship with their subjects. At a minimum, a biography of one’s parents is a book about three people.

Aleksandar Hemon’s work signifies a change from biographies anchored in the past to those concerned with offering a contemporary perspective. My Parents is a project that embraces point of view to show just how much people like Robert Shields had it all wrong. The past isn’t about what transpired when. It’s about remembering how people were.

Will Schick is a Marine Corps veteran and current MFA student in creative writing at American University. His work appears in Cleaver Magazine, the Marine Corps Gazette, and Proceedings Magazine. In his free time, Will serves as a volunteer writing-group leader for people experiencing homelessness and writes for a local DC paper called Street Sense. Follow him on twitter at @schick_will.