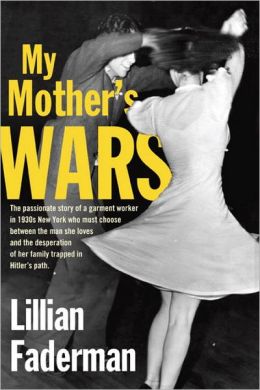 This strikingly intelligent and emotionally wrenching narrative traces almost a decade in the life of its main character, Mary Lifton. Set in New York beginning in 1932, the story explores Mary’s life as a Jewish immigrant from Europe. Her good fortune is that her family got her out of Latvia long before Nazi power and U.S. quotas severely limited chances for such relocations. Mary’s life as an uneducated, Depression-era foreigner, a woman without influence or meaningful support system, represents the life of many such desperate individuals. And yet Mary is remarkably well profiled by the author. This shouldn’t be surprising, as the author is Mary’s daughter.

I haven’t yet used the word biography to label this work because given the liberties that Ms. Faderman admits to taking, the book could have quite easily been published as fiction. The main sources for building character and situation are conversations between mother and daughter over the years. Many of these conversations (as well as conversations between Faderman and her mother’s younger sister) belong to a wholly different era than the events, beginning perhaps in the 1960s. Given the richness of the source material, this reader finds an unexpected remoteness between author-daughter and mother-character. In spite of this sense of distance, and due no doubt to the author’s skill and inventiveness, a luxuriantly imagined Mary Lifton explodes from the pages.

Whether viewed as fiction, biography, or creative nonfiction, My Mother’s Wars is a powerful achievement. One of its many glories is professor Faderman’s portrait of the New York Depression-Era garment industry. Her descriptions of work spaces and conditions, interactions among employees, and operations of union and nonunion shops, are totally engrossing and ring with authenticity. In these descriptions, the author demonstrates her ability to turn voluminous research into flowing action and imagery.

Faderman underscores not only that this industry depended largely on Jewish and other immigrant laborers, but also that Jewish ownership was prominent — even dominant.

The author creates additional context by beginning each chapter with carefully constructed “Time on the March” introductions. Having the feel of movie-house newsreels, these nuggets of historical fact are drawn largely from contemporary reports in Time magazine and the New York Times. They outline the different stages of two processes: the horrific rise of Nazi Germany and the disastrous slide of the U.S. economy.

The story proper begins in 1932 with Mary already in her mid-30ss. She had already lived more than half of her life in the United States. Anti-Semitism, which Latvia had in abundance, did not seem to have influenced her relocation at the age of 17. Rather, her marketable skills in clothing manufacture and her determination to become a professional entertainer led her to accept her step-sister’s invitation to immigrate. But the sponsorship of the step-sister and her step-sister’s husband created an awkward sense of obligation, and the clash of personalities was extreme. After only a few months, young Mary was out on her own. At first, she loved the freedom. However, over time, loneliness engulfed her.

By the time of the early years of the Great Depression, Mary had made a quiet life for herself, living in furnished rooms in other people’s apartments and putting in long hours in a series of Garment District jobs. She had few relationships, little money with which to indulge her curiosity or her appetites. But now, as her attractive appearance begins to lose its bloom and her dancer’s step to lose its spring, she meets the man of her life. Morris Faderman is her grand and all-consuming passion. However, like a non-union shop, his sense of well-being depends on exploiting her insecurities and isolation.

She convinces herself that she can have her wished-for future with him: marriage, children, greater financial ease. But Morris’ side of their relationship involves ducking responsibilities, long absences, false promises, and a certain degree of abuse. At his insistence, she agrees to abort two pregnancies. The 1930s slide by with one-sided faithfulness. Mary’s naïvete and her passionate nature lead to several bad decisions, but her addiction to Morris is the worst because it is so self-demeaning.

Years later, pretty much a lost soul, Mary takes a stand. Actually, Morris leaves her little choice. When she becomes pregnant a third time, Mary is 43. She is surprised, but also certain that it’s her last chance for motherhood. Although her tenuous hold on Morris is clearly weakening, she determines to have and keep the child.

There is another obsession in Mary’s life, and that is her desire to bring the family in Latvia to safety. Over and over, she and her sister Ray send money to their mother and their siblings. They attempt to find avenues to get their family to the U.S. under its conservative immigration quotas, or to somehow have them take advantage of loopholes. One possible avenue would require action on Morris’ part, but he refuses. After the family members become Holocaust victims, Mary never can throw off the guilt of her failure.

While Faderman gives Mary’s outer life meticulous attention, it is Mary’s inner life that keeps reverberating long after the book is put away. She is always an exile, her life a mixture of disappointment and dignity. That life, of course, is a representative story as well as a particular one. Through it, Faderman reminds us of the emotional suffering of those lucky enough to escape the Holocaust but unable to rescue their loved ones. The narrative of Mary Lifton’s life ends with the birth of Lillian Faderman, who as an author and scholar now in her 70s, gives artistic birth to Mary.

Himālaya: Exploring the Roof of the World

An illuminating look at a poorly understood region.