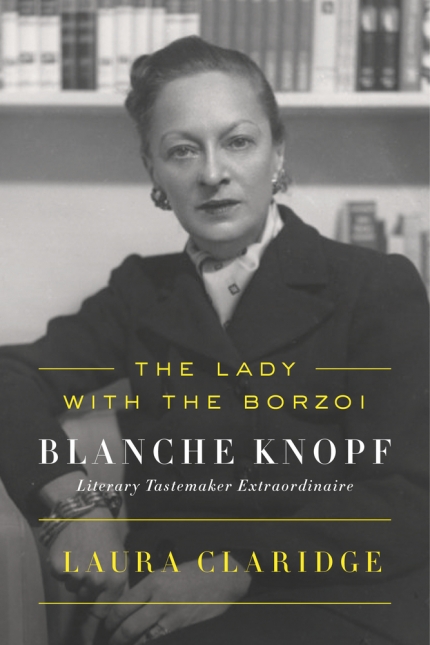 A little over a century ago, one young woman discovered the delights of literature. She then met a young man who liked to talk about books, and they planned to marry and start publishing them. Alas, the marriage was not a fairy tale, but the publishing house they founded became one of the most prestigious in the country.

Blanche Wolf lived the conventional life of a well-to-do Jewish young lady in New York City: private school, piano and riding lessons, and dancing at a country club where, in 1911, she was introduced to Alfred Knopf. She was a 17-year-old who had just finished school; he was soon to graduate from Columbia University.

They were married in 1916, in a much more elaborate wedding than the bride wanted. But for Blanche, far more important than the wedding arrangements was the organization of the publishing house the young couple started. She believed Alfred had promised he would make her “an equal partner in the publishing company they’d dreamed of creating from the start of their courtship.”

However Blanche understood that promise, it was never kept. She owned just 25 percent of the company and the firm carried only Alfred’s name. After her death, Alfred claimed that “he’d always intended to use his name alone…whatever Blanche had assumed.” When Alfred A. Knopf was launched, Alfred was president and Blanche vice president. Blanche suggested the colophon based on their borzoi, “the elegant dog that looked perpetually on the move.”

Throughout the decades they worked to build the company, Alfred never gave Blanche the credit she was due for her extraordinary contribution. In The Lady with the Borzoi, Laura Claridge seeks to set the record straight. Her book is more than a biography of Blanche Wolf Knopf; it is the story of a marriage and of a publishing company.

Alerted to talented writers by her lifelong friends Carl Van Vechten and Henry Louis Mencken (known to readers as H.L., but to Blanche as Henry or Menck), she sought and signed authors who became major figures in American literary history. She developed Knopf’s Borzoi mysteries by enlisting Dashiell Hammett, James M. Cain, Raymond Chandler, and Eric Ambler. She traveled to Europe and South America and brought the work of leading writers from those continents to the firm. By the time of her death, Knopf authors had won 27 Pulitzer Prizes and 16 Nobel Prizes for Literature, many of them awarded to writers Blanche had brought to the firm.

Among the Europeans whose work Blanche acquired for Knopf were Thomas Mann, Sigmund Freud, Jean-Paul Sartre, Simone de Beauvoir, and Albert Camus. Mann and Camus became close friends of Blanche. After Thomas Mann fled Nazi Germany, she helped find him a faculty position at Princeton, where he and his wife depended on her “for everything…from stocking their refrigerator to using the telephone.”

In Camus, she found someone “whose worldview matched her own more closely than that of anyone she had ever met.” They met a couple of times every year in Paris for coffee and conversation, and she campaigned for him to be awarded the Nobel Prize. His death in a 1960 auto accident devastated her.

In contrast to her success in publishing, Blanche saw herself as a failure as a wife and mother. Not only did she and Alfred fight at home, but their spats in office meetings were embarrassing to those forced to sit through them. At home, she had her own bedroom and, eventually, her own apartment. She had affairs with other men, apparently specializing in famous musicians, including Leopold Stokowski, Serge Koussevitzky, and Jascha Heifetz.

Claridge presents a relationship notorious for acrimonious quarrels, but also quotes from loving and coyly playful letters and telegrams Blanche sent to Alfred throughout her life. The couple traveled together to Europe but went their separate ways once over the ocean.

They also traveled west, with Alfred loving the American landscape, and Blanche finding the kind of outdoor activity Alfred enjoyed to be beyond her strength. Her health was always problematic after the birth of her son, and the diet pills she took eventually destroyed her eyesight and contributed to her frailty.

Although the author does not spend much time analyzing the reasons for the fraught relationship between Blanche and Alfred, the reader is bound to, as Claridge includes a wealth of commentary from those who knew the couple. At times, the story gets lost in the stories. There is a lot of the “what” and little of the “why.”

In seeking to give Blanche the recognition that was denied her, Claridge writes that Blanche was “a superb editor of fiction and poetry: she listened to the rhythm of the language on the page and reacted to phrases, vocabulary, even punctuation, as she considered who might be right for Knopf.”

She “could move from the rarefied French translations she acquired at Knopf’s founding, to the twentieth-century English-language poetry and fiction she secured, to the bold African-American literature she had quickly appreciated,” and on to the “gritty Depression-era aesthetic” of detective fiction. This, Claridge suggests, demonstrates “an extraordinary, intuitive sensitivity and ability to anticipate the popular reading tastes of the times.”

Blanche’s role in making Knopf the prestigious publishing house it became was substantial, indispensable, and worthy of celebrating, as Laura Claridge has done in this welcome biography.

Alice Padwe worked at Knopf early in her career. As a fairly junior editor in the college-textbook department, she never met Blanche or Alfred but heard stories of Blanche’s contribution to the company.