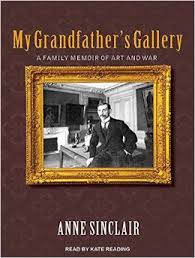 My Grandfather’s Gallery: A Family Memoir of Art and War recounts the life of the extraordinary Parisian art dealer Paul Rosenberg, as written by his granddaughter, the French television journalist Anne Sinclair.

Rosenberg was a major proponent of modern art in the first half of the 20th century. Within his gallery at 21 rue La Boẻtie, he championed artists intent on breaking conventional expectations about perspective, subject matter, and color. While he also handled the work of well-established impressionists such as Renoir, his true passion lay in supporting art that was beautiful as well as challenging to the public’s preconceptions.

“Painters before their time do not exist,” he declared. As far as Rosenberg was concerned, no artist was ever “ahead of his time”; it was the public who was behind.

The walls of 21 rue La Boẻtie, where Rosenberg had both his home and gallery, were covered with paintings by Lẻger, Braque, Bonnard, Matisse, and Picasso — especially Picasso.

“It was he, Picasso, who overthrew past conventions,” Rosenberg once told an interviewer. “And at his whim created others, and who, bored at seeing the same forms reproduced, devised his own…He has opened new horizons for us.”

The admiration was mutual — dealer and artist referred to each other as “Pic” and “Rosi,” and, for a spell, Picasso even lived next door to 21 rue La Boẻtie, an arrangement permitting an almost daily exchange between the two men. (Appropriately, the frontispiece of Sinclair’s book is a drawing by Picasso of her youthful grandfather, his customary elegance already evident.)

And then came WWII, and everything changed.

Rosenberg was not only a Jew, but a Jew with a passion for what the Nazis called “decadent art.” In short, he was targeted twice. Less than three weeks after occupying Paris, the Nazis demanded that 21 rue La Boẻtie be seized and all its works confiscated. But the invaders were disappointed.

With remarkable prescience, Rosenberg had “loaned” many pieces to museums in London and America. Others he took with him when, at the war’s start, he and his family moved to Floirac in Bordeaux, where he stored the paintings in what he assumed would be a secure bank vault.

Eventually, Rosenberg and his family made their way through Spain and then Portugal, and finally to the United States, where he opened a gallery in Manhattan that was as successful as the one he’d fled in Paris.

At the war’s end, Sinclair writes, her grandfather returned to Paris to a bitter irony: During the conflict, his beloved 21 rue La Boẻtie had housed the Institute for the Study of Jewish Questions, and when Rosenberg went down to its basement, he found it stuffed with anti-Semitic propaganda.

He then learned that Picasso, who had remained in France, had another dealer. And, finally, he discovered that the vault where he’d stored over a hundred paintings had been looted. Altogether, Rosenberg would lose 400 paintings by some of the greatest artists of the 20th century.

Another, more personal betrayal, however, would prove the most wounding of all. While going through his papers, Sinclair discovered a letter her grandfather had written to his wife, Margot, intending that it only be read if he failed to return from a trip to North Africa to see their son, who was fighting with the Free French forces. The letter makes clear that Margot had had an affair with a rival dealer and that their marriage had been profoundly unhappy.

My Grandfather’s Gallery has notable similarities to The Hare with Amber Eyes by Edmund De Waal. Both have art at the heart of their narratives; both are about extremely wealthy Jewish families; and both tell how the Nazis nearly destroyed those families’ fortunes and lives. What’s more, rather than being a true memoir, each is a story of discovery told by a grandchild.

But where De Waal’s contemplative, indulgent tone invites his readers to journey with him, Sinclair’s style is more reportorial and less engaging. Perhaps this problem arises from the translation by Shaun Whiteside — My Grandfather’s Gallery was originally published in France in 2012 under the title 21, rue La Boẻtie — but a more likely explanation is Sinclair’s background as a journalist.

Meticulously researched, My Grandfather’s Gallery is laden with facts, but they slow the story’s momentum. Memoirists are free to borrow from the fiction writer’s toolbox in order to make their characters come alive in scenes crackling with description and dialogue, but Sinclair does not.

True, she wasn’t even born when many of the book’s events transpired, but a good writer knows how to collapse time to put her readers in the midst of the action, even if it’s imagined action (Frank McCourt achieves this brilliantly in Angela’s Ashes by shifting verb forms).

And even in those scenes where Sinclair is present, she doesn’t linger enough for the reader to experience her interior response to unfolding events. Mnemosyne — the Greek goddess of memory — is fearsome, and it takes a brave writer to enter her realm. Sadly, Sinclair gives us unadorned information when this reader, at least, longed for illumination.

Patricia Schultheis is currently a lecturer in the Odyssey Program at Johns Hopkins University. She has had several essays and short stories published or accepted by national and international literary journals. Her pictorial local history, Baltimore’s Lexington Market, was published in 2007, and her collection of short stories, St. Bart’s Way, was a finalist for the 2008 Flannery O’Connor Award and Snake Nation Press Award.

Just Us: An American Conversation

Its intermittent lyricism aside, this commentary on race falls short.