My Good Son: A Novel

A tailor in post-Tiananmen China strives to make a better life for his grown child. 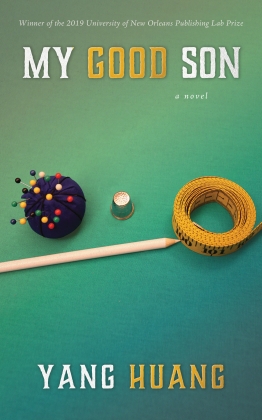 Reading My Good Son is an adventure for an American. The author, Yang Huang, wrote the book in English, but Chinese is her first language, and the text of the novel is both piquant and at times puzzling. The story is told from the point of view of Cai Liang, referred to throughout the story simply as Mr. Cai. His sole concern is the future success of his son, Feng, who is in his early 20s and consistently falls short of his father’s expectations.

The story is set in the Chinese city of Yangzhou. It begins in 1990, one year after the Tiananmen Square Massacre. To control the size of the population, the Chinese government requires that a couple have no more than one child. Mr. Cai is a middle-aged tailor whose house is also his shop. He specializes in the Tang suit, very popular at the time. His wife, known only as Mrs. Cai, works with him in creating clothes. One of his customers is Jude, an American Feng’s age who contracts with Mr. Cai to make him a vest.

Adjacent to Mr. Cai is the shop and house of Mr. Ouyang, who sells, among other things, ready-made clothes. Jiao, Ouyang’s daughter, is Feng’s age. At the beginning of the story, she is away at school. Jude recommends Mr. Cai to a friend of his, a young woman called Little Ye, who asks him to do alterations for her. She explains that she is pregnant but is vague about her husband.

The stage is set.

In time, we learn that Little Ye is not married, and that Feng is the father of her unborn child. Not only that, she’s carrying twins. Feng doesn’t want to marry her and is more and more attracted to Jiao.

Jude, it turns out, is homosexual. He befriends Feng. Mr. Cai hopes that Jude will help Feng find a way to study in the U.S. Jude’s parents, who don’t know Jude is gay, plan to visit China to see their son. Jude decides to confront them about his sexuality.

I won’t spoil the novel’s suspense by revealing how all these predicaments get resolved. Suffice it to say, events take several unexpected but perfectly credible turns. Ultimately, I found the conclusion more than satisfying.

The world in which this story unfolds was foreign to me, even though I’ve been to China and speak Chinese. Repeatedly emphasized in the narrative is a person’s looks; nearly all the young people are depicted as handsome or beautiful. Characters’ clothes are described at length, perhaps because the protagonist is a tailor.

The clothing included many garments I was not familiar with — including something called a dudou, worn only by women. Some of the foods mentioned and described — such as longan, sour plumb juice, egg flower soup, pilose antler wine, yam beans, and red yam dessert soup — were also alien to me.

Typical of the narrative threads I failed to make sense of is the one that tells of Mr. Cai’s catching a school of carp in the Yangzhou’s Slender West Lake near the Five Pavilion Bridge. He gives some of the fish to Feng. Both father and son keep the fish and feed them. As the fish grow, the men consider how soon to cook and eat them. But then they dump them back in the lake. The significance of the tale was lost on me.

And Yang Huang’s English both intrigued and perplexed me. She regularly uses a single open quote (‘) instead of an apostrophe (’) to indicate missing letters or numbers (e.g., “in the summer of ‘60”) and sometimes mis-hyphenates words at the end of lines (e.g., “Ju-de’s bare arms”). In conversations, characters use formal and casual expressions interchangeably, and odd language also abounds:

“Mr. Cai spun around on his heels. Little Ye wore a pair of lemon-dotted culottes and symmetrical short hair that hung beside her cheeks.”

“Mr. Cai plunked himself down on the sofa. His taut nerve snapped like an arrow shooting off a bow.”

Overall, I found the author’s inadvertently quirky language intriguing, even though it made the text harder to understand. This is, after all, a story about a culture quite alien to most Americans. In the end, both the language and the way Yang Huang is able to bring together the disparate threads of the story made for a satisfying read.

Tom Glenn is a fulltime novelist best known for the 13 years he was in Vietnam more than the U.S. As a result, three of his novels deal with the war there. He now has six books — two published last year — and 17 short stories in print.