A sizzling, boozy romance between a movie star and a widow from Nebraska — with a dash of Frankenstein thrown in for fun. 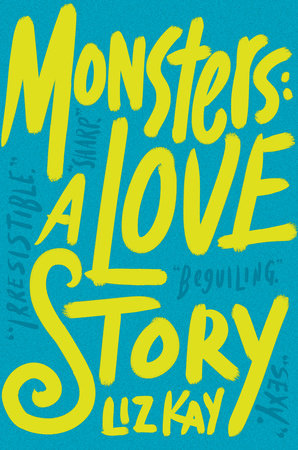 Liz Kay’s debut novel, Monsters: A Love Story, takes on the unlikely whirlwind romance between a grief-stricken Nebraskan poet and a womanizing Hollywood heartthrob. At times somber, at times heartwarming, the story of this improbable romance is an addictive page-turner, ripe with seduction and charm, that drops insights into this messy, crazy, wonderful thing called love.

Recently widowed and with two children to care for, protagonist Stacey Lane is in the midst of despair when she receives an unexpected email that changes everything. Her novel-in-verse, Monsters in the Afterlife, has been optioned, and now, the Tommy DeMarco, a ridiculously sexy and dazzling playboy actor, has decided to produce her film.

Suddenly, Stacey’s quiet Midwestern life turns upside down as her book gets made into a movie. She fights with misogynistic screenwriters and finds herself surrounded with beautiful movie stars and famous (but handsy) directors.

A highlight of the novel is its explorations of rich and complex characters with multi-faceted backstories. Stacey’s deeply conflicted feelings toward Tommy first develop from her grief and loneliness over her husband’s death, and perhaps also from a necessity to move forward.

On the other hand, like many romances’ male leads, Tommy is unsurprisingly rich, famous, witty, and gorgeous — as much a fantasy to the characters in the book as to readers. And yet he’s more than just his pretty face; a divorcé, he is a devoted but clueless father struggling to connect with his only daughter.

Of course, Tommy and Stacey’s quasi-pseudo-not-relationship relationship has its conflicts. While most of these are not high-stakes fights, they are fun and sexy. The battles occur to reveal the inevitability of their love for each other, though some might suggest theirs is a manipulative relationship. Bad-boy Tommy constantly pushes the limits of their bond, particularly in one notable scene, which hints at non-consensual sex.

But don’t expect lots of gratuitous sex scenes; the characters may be promiscuous, but the writing is subtle. Much like the role Tommy plays in Stacey’s film, Tommy seems to be the one controlling things: “‘How are you gonna go back to Omaha? How are you ever gonna sleep?’ ‘I’ll find someone else,’ I say, and Tommy laughs. He says, ‘No, you won’t. Not like me.’”

For Stacey, events prove not to be so simple. Her inner struggle becomes even more complicated when she meets Phillip, a doctor with a gentleman’s chivalry and a big heart — a man who adores her. The only thing is, compared to Tommy, Phillip (and really, any human being) seems slow and boring, both in personality and in bed.

The novel follows the typical love triangle — the choice between the angel (nice guy Phillip) and the devil (Tommy) — and repeatedly plays both love interests off each other as they vie for Stacey’s affections. Still, Liz Kay manages to throw in a twist that will keep readers guessing until the very end.

As an added bonus, Monsters offers an invigorating story within a story. Stacey’s own novel-in-verse, Monsters in the Afterlife, is a smart and refreshing inversion of Frankenstein: a feminist commentary on gender and control, a discussion on the representation of good and evil, beauty and corruption.

While Monsters can at times appear to be a typical romance, it’s sprinkled with moments of surprising wisdom that add depth to the characters. Just when she thinks she has everything settled into place, Stacey’s intuition foreshadows the coming tensions in her relationships: “‘Tornado weather,’ Phillip says, pointing to the clouds stirring in the west, but he’s wrong. The real storms come on clear days. The real storms come when the air is very, very still.”

So pour yourself a glass of a “very dry, very crisp white,” or Stacey’s go-to, a chilled vodka, and settle into this sizzler. The tantalizing will-they-won’t-they tale of Stacey and Tommy’s tormented relationship make Monsters a great beach read.

Chelsea Leigh Horne’s work has appeared or is forthcoming in the Paterson Literary Review, the Rumpus, the Buffalo News, Café Americain, and elsewhere. She is the World/Travel editor at Ragazine. She has an MFA in creative writing from American University. Follow her on Twitter at @CL_Horne.