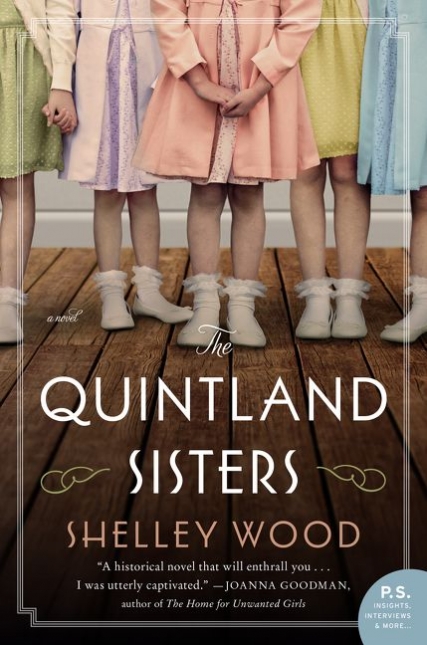 It’s 1934 in rural Ontario, and 17-year-old Emma Grace Trimpany has been pressed into service by a local midwife to assist a French-speaking farm wife in premature labor. After the woman’s first baby girl is born, another presents itself, then another, another, and another.

Throughout the astounding event, Emma does what she can to help:

“By now, Mme. Dionne looked like she was ready to give up altogether, she was so weak after the third little baby emerged…I retreated as much as I could after the doctor arrived. I busied myself in the kitchen, closing my ears to the wails from the bed and trying not to peep constantly at the little things under the blanket. I boiled pot after pot of water and washed up what I could, even as there were more exclamations of astonishment and prayer from the room next door. Because the night was far from over…"

The frail babies, who range in weight from 1 to 3.4 pounds, will become the famous Dionne Quintuplets. Emerging like wiggling barn rats in the unheated farmhouse, the identical girls are nonetheless completely unique, especially because their chances of survival are 1 in 57 million. The quints are instantly the most famous children in the world — a bright spark in the smoldering darkness of the Great Depression.

Emma cares for the infants, who are not expected to live. Meanwhile, the Canadian government removes the babies from their impoverished parents since the couple already has five small children and is unprepared for the fragile new arrivals.

The quintuplets become wards of the British king. Word of their miraculous birth spreads, and more than 6,000 visitors line up daily outside a custom-built hospital to view the five sisters, all living within a fishbowl sanctuary staffed by doctors and nurses who, along with Emma, monitor every minute of the infants' days.

Emma is also a talented sketch artist and captures the girls in their sameness and individual distinction. Their images adorn advertisements, appear in international newspapers, and are featured in television documentaries. Inevitably, discord arises between the doctors, the Canadian government, and the parents. Fights and lawsuits erupt over the babies' care, custody, and marketability.

As the quintuplets grow out of infancy, Emma lunges toward womanhood and the crossroads that awaits: Life’s demands are pressing in, and she knows she cannot continue caring for her darlings and attend art school at the same time. And then there is the competing and unexpected affection she develops for a youthful Canadian aviator.

Although a fictional telling of an historical event, The Quintland Sisters is admirably bolstered by author Shelley Wood’s decision to include diary entries, journalistic research, and clippings from contemporary news articles covering the true lives of the Dionnes.

As such, the book tracks like a newsreel — a sequential running account — of the lives affected by this extraordinary (yet natural) miracle that touched laymen and royalty alike. The structure of the novel, combining history and imagination, provokes renewed fascination with the babies’ actual lives, ensuring the quints’ eternal place in the annals of fact that is stranger than fiction.

Janet A. Martin is a journalist whose career experience includes national magazines, features in public affairs shows for PBS television members in Georgia and Virginia, and CNN. She is the author of a seasonal fable entitled The Christmas Swap and is currently in the finishing stages of a book of historical fiction set in Atlanta about four Southern girls coming of age in the 1960s.

This quietly wrenching series of linked stories cuts to the heart of what it means to love and deceive and to keep trying.