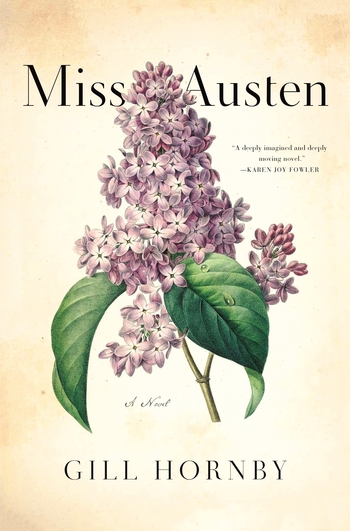 A reader might well assume that a book titled Miss Austen refers to the 19th-century novelist Jane Austen, about whom a plethora of biographies, novels, and scholarly works have already been written. Instead, the name refers to Jane’s lesser-known sister, Cassandra.

Based in large part on a multitude of letters between the two sisters and their friends and family, as well as other contemporary accounts, Gill Hornby’s novel is a warm and fascinating story that reads as though it could be a Jane Austen work itself.

The only two daughters in a family with five sons, Jane and Cassy were remarkably close, sharing a bedroom — even, usually, a bed — and a deep, sisterly attachment almost their entire lives. Jane was the odd one, sometimes moody and even prickly, sometimes jocular, filling the house with her wit and laughter. Cassy, two years older, was the steady, dependable one, always with an eye on the wellbeing of her far more fragile sister.

Miss Austen begins in 1840 with the unannounced arrival of Cassy at the home of Isabella Fowle, the daughter of a departed, dear friend of both sisters. It is more than 20 years after Jane’s death, and the elderly Cassy has arrived on a clandestine mission. She hopes to secretly retrieve the correspondence between Isabella’s mother and Jane, as well as her own letters, in order to destroy any that might negatively affect Jane’s reputation. She explains herself to a niece:

“When your aunt Jane was still with us and enjoying her little burst of success, there came a few vultures who liked to feed on any scraps of her life. The stories were not enough for them. They wanted the facts about her, and she was not minded to share them. As her novels live on — and I hope and believe they will do — there may well be more in the future. We must be very mindful of what we leave out for them to pick on. Very mindful indeed.”

The chapters alternate between Cassy’s covert efforts (often hindered by a suspicious household maid) and her memories of her earlier years, as prompted by the letters she eventually finds. These letters, it should be noted, are not historical; instead, they are the deft creations of Hornby herself.

In them, as well as in the rest of the book, we see Cassy first as a young woman, deeply and joyously in love with her fiancé and with great expectations for the future; then, suddenly, we witness her making a simple, inadvertent vow that will reset the course of her life. In the ensuing years, she will find herself in the kind of life one might expect from an unmarried woman in a Jane Austen novel: one of service to family and friends.

In fact, if one could imagine an Austen novel in which the primary character never marries despite being attractive, charming, and intelligent, and having more than one opportunity to do so, that novel might well resemble Miss Austen.

This does not mean, however, that Cassy’s life is one of loneliness and drudgery. Wherever she goes, she finds herself in engaging, even unusual, company, and she views it all with a compassionate and sometimes amused eye:

“Miss Austen was not a well-traveled woman. She had never been farther east than Kent — had certainly never been as far as Bengal. And standing in Mary-Jane’s quaint Tudor dwelling, she was amused to discover that she now did not need to: much of Bengal having, conveniently, come here. Tigers bared their teeth at her, elephants their tusks. Under glass, a menacing snake — she chose to presume stuffed — was coiled, ready to strike. On every surface were enough swords to sever the heads from a multitude of rural workers impudent enough to ask for fair pay.”

Cassy’s life with Jane, while filled with concern for her sister’s deteriorating health, is still one of travel, laughter, and small pleasures, not the least of which is listening to Jane reading, most evenings, from whichever book she is currently writing.

Gill Hornby has written Miss Austen with compassion, wisdom, an observant eye, and a great deal of humor — sardonic and otherwise. Miss Austen is a novel that could well take its place on the bookshelf beside one of Jane Austen’s own.

Sarah Shoemaker is a former teacher and university librarian and author of the novel Mr. Rochester.