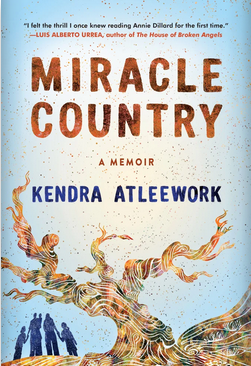 When Kendra Atleework visits her hometown at the tail end of a fire that ravages the community but leaves the house she grew up in standing, she is stunned by a land laid bare. Viewing the devastation, she sees her neighbors’ homes in ashes and mountains scorched by flames: “To understand the place we call the Eastern Sierra, you must be able to see what is no longer here.”

Miracle Country, Atleework’s debut memoir, is many stories. It is the story of a family knitted together by unconditional love and unraveled by loss. It is the story of Swall Meadows, a small town in the Owens Valley existing on the brink of drought and wildfire. It is a history of California and the fight for land and water rights. And it is the story of fleeing a place you love and then returning to the place you can call home.

For Atleework, that place is the Eastern Sierra:

“This valley is high desert, a long brown sliver of sagebrush and bitterbrush cupped between ranges — to the west, the stark granite escarpment of the Sierra Nevada, casting its rain shadow across our towns; to the east, the Whites and Inyos, those ancient desert mountains, rippled and purple — both 130 miles long, rising two vertical miles, over fourteen thousand feet at certain peaks. Fire, drought, flood, and blizzard visit the eastern Sierra often. Perhaps this is why the nearest place with a population over thirty thousand is two hundred miles away.”

Miracle Country circles back through Atleework’s life growing up in a region where the average annual rainfall is only five inches. It takes on the loss of her mother and her own leaving of Swall Meadows for college and graduate school. Retelling family stories, Atleework introduces us to her parents, two adventurous spirits who fall in love with each other and the Eastern Sierra.

Reflecting on her family and unconventional upbringing, she writes, “Our family matched the strangeness of the landscape my parents had chosen: uneasy, not a level place of right angles.”  The author and her siblings claim their own last name, an un-hyphenated combination of her father’s, Atlee, and her mother’s, Work. They grow up without television, and their only radio is the valley’s country-western station. A trapeze hangs in the living room.

Atleework’s relationship with her mother permeates much of Miracle Country. Atleework’s mother, diagnosed with an autoimmune disease when Atleework is 6, knows her illness could turn into cancer, but not when. Not wanting to cloud a carefree childhood with anxiety, the parents hide this possibility from the children until a confirming diagnosis is finally handed down.

By that time, Atleework and her sister and brother are 16, 14, and 11, respectively. “Perhaps they decided we would live enough years with fear. And so they separated fear from caution, making caution an ingredient for joy.”

The last few months of her mother’s life are riddled with uncertainty and fear of the future. In one poignant moment, Atleework asks her mother why she relented and allowed Atleework to get her navel pierced, and her mother replies, “So you’ll remember me.”

When Atleework’s mother dies, the family is torn apart, unleashing an explosion of grief and anger. While the author goes off to college, her sister and brother escape their pain in their own ways. Her brother steals a truck and sprays graffiti on a church wall; her sister shoplifts and cuts herself.

Carefully braided through Miracle Country is a complex history of water in the Eastern Sierra — the struggle over who owns it, who takes it, and where they take it from:

“The story of water in Owens Valley, as I first understood it, was a sad story of wrong done…The legend of a loss, its familiar, abstract pain, accompanied me when I had to go away. What was missing became its own force. We felt it like skin scraped off bone.”

The book recounts the construction of the Los Angeles aqueduct, the brainchild of William Mulholland, and how the lifeline of Owens Valley was metered to a city over 200 miles away. Mary Austin, author of The Land of Little Rain, is frequently invoked in Miracle Country. Austin is like a prophet predicting the damage the aqueduct will do: “She saw the way scant water defined life between the mountains…she accused Los Angeles of buying land and obtaining water rights from valley dwellers without admitting plans to carry that water away.”

Later, Atleework describes the ordeal of drilling a new well on her father’s property. She wants readers to understand water’s value and what the community has lost:

“Our wells fail because of drought — and because, during drought, DWP continues routing streams into the aqueduct. The groundwater beneath Owens Valley is not replenished, so its levels drop. Meadows die. Trees die.”

It would be easy to assume that Miracle Country is another depressing account of the consequences of climate change and urban development. Instead, the author has pieced together an intimate portrait of one family’s resilience and a community deeply rooted in the Eastern Sierra. Memories of her mother and her family are written with candor and affection, and the land comes alive through her prose. We are tied to our landscape, and Kendra Atleework is a fresh voice reminding us of that fact.