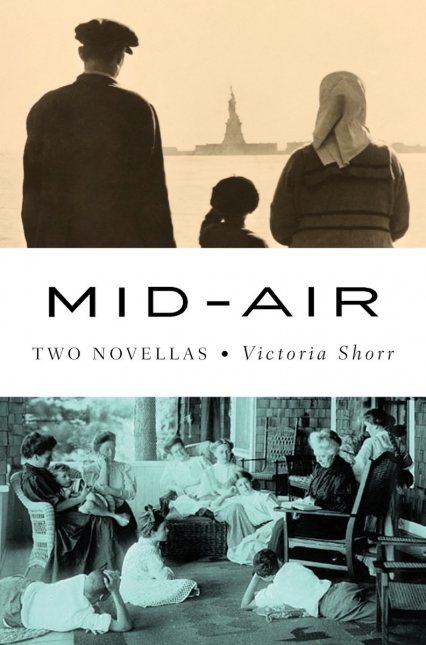 Victoria Shorr’s Mid-Air is not the proverbial but elusive Great American Novel. Rather, it is two great American novellas and two very different, unique perspectives from which to consider the tug of America’s past and the pull of its opportunities. Alone, either of these affecting stories would have been an engrossing read; together, they offer a motherlode of questions and issues, not to mention wonderful fodder for book groups.

The first, “Great Uncle Edward,” transpires in New York on a spring evening in 1978, when “the Village” was genuinely bohemian, and the narrator was 27. She’s having a dinner party, and the guest of honor is the family patriarch, Edward Perkins, Harvard class of 1905. Great Uncle Edward also is the keystone holding up the family arch, one branch rooted in its diminished clipper-ship wealth, and the other barely standing, its mortice crumbling from financial reversals, sudden deaths, divorce, and alcoholism.

But on this spring evening nearly 50 years ago, none of that matters. Because he is the soul of probity, Edward arrives precisely at 8 p.m. to join other assembled relatives: impecunious Betty, alcoholic Molly, and poor Russell, who’s been reduced to selling off the family library to keep a roof over his head.

Shorr is a wonderful stylist whose propulsive prose reflects the nature of memory itself, alighting here, then there, then back here. Moreover, given that “Great Uncle Edward” is about a decidedly WASPY family, Shorr sidesteps the temptation to slip into irony and instead treats her subjects with kindness. They know their time of prominence in America is over, but that night, the flowers remind Edward of his great-grandmother, “the one who died just short of her hundredth birthday, and whom Uncle Edward had known when he was a young boy. And she, as a young girl, had known George Washington.”

The family lineage shows in the smiles of those at the table. “All faces were transformed, beaming in the candlelight. Smiling one smile, all around. No one was rich or poor or fallen or lifted up. No one was out in the cold. Life had done nothing. We were all of us worthy.” Lovely stuff, this.

“Cleveland Auto Wrecking,” Mid-Air’s second novella, is the story of the White family, whose paterfamilias, Sam, arrives alone in America as an illiterate 13-year-old from somewhere in Eastern Europe. The year is about the same as when Uncle Edward was a Harvard undergraduate. Somehow, Sam lands in Youngstown, Ohio, mistaking it for Cleveland, and begins to haul junk in a handcart. From that inauspicious beginning, he and his three sons build an empire.

When Sam loses his first house in the Depression, he moves his family “to the ragged part of town with the other excludes, only he managed to pull himself together again in a way that they never did. Because, though he never learned to read, for some reason he could work with numbers — not written, but in his head.”

This ability, plus his limitless capacity to work, results in Sam transforming his junkyard into one of America’s largest used-auto-parts companies. “America…Once he’d figured it out — that if you’re selling something they want, they will buy it, as simple as that.”

When Sam moves to California, his sons stay in Ohio. “The yard was growing, business was good. They were making money…There was no reason things couldn’t continue as they were, on rise for the White brothers, along with much of the rest of America in the sixties.” But then Youngstown’s largest employer closes its doors, and the town’s economic engine shuts off.

By then, however, the White brothers’ firm has already reincarnated itself as a developer on the outskirts of Palm Springs.

Far from being a parable about greed, despoiled land, or urban decline, “Cleveland Auto Wrecking” is a story of the opportunities that only an eye unclouded by sentimentality can spot. A tangled love interest, messy divorces, and questionable business dealings all are quashed for the sake of the company and the money it makes.

By the end, Sam’s now-elderly youngest son, the one who “turned out to be the best of them all,” and his wife are having dinner at the country club near their Santa Barbara home — another lovely evening. And another toast. She lifts her glass to him and says, “To us.”

Mid-Air achieves what all fine fiction must: With nary a hint of being doctrinaire, its characters’ lives unfold in the midst of history’s ebb and flow. And Victoria Shorr is subtle enough a writer to leave readers wondering if “To us” is meant for the aging White brother and his spouse, or if it’s meant for all Americans, we the people, who, in the words of Woody Guthrie, live in the land stretching “from California to the New York island.” Consider the possibilities.