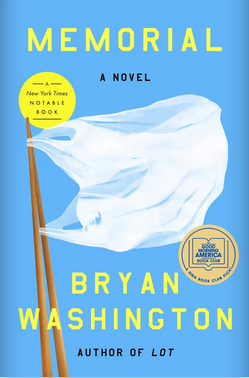 The strongest sentences in Bryan Washington’s prose capture the silences beneath speech and movement. In the title story of his acclaimed 2019 collection, Lot, a mother tells her children that “love was a verb,” not some abstract feeling but “something you have to do.” The mother, recently separated from her husband, doesn’t elaborate, but the act of loving, the result of having loved and been loved, is seen clearly: “She had makeup all over her brow. Smears of it on her lips.”

Sparsity colors the page, and one begins to imagine what left her so disheveled. Instead of offering a history of the marriage, Washington, in a few short sentences, gives the reader a portrait of its consequences. With Washington, there is a determination to let things speak out of their own silence, the way one might look at a photograph and envision how, after the camera turns its gaze elsewhere, the forced smiles will fall back toward their everyday pose.

The author has now followed Lot with Memorial, which is, like his previous work, partly set in Houston and follows a decaying relationship between two young men who struggle with notions of home and belonging. The novel is narrated through the divided perspectives of a gay couple: Benson, a Black daycare teacher whose job supervising children as they fight and work and play serves as a microcosm of adult life, and Mike, Japanese American and slightly older, who makes his living as a cook.

The two fight frequently and, “to clear the air,” fuck the tension away: “That became our routine whenever we fought. Whenever things got bad. Like we were fucking away the thing that’d sat itself on our chests.”

Here, sex is less a form of intimacy than a mawkish groping for it. Things are further complicated when Mike’s mother, Mitsuko, flies to Texas to stay with them, only for Mike, one day after her arrival, to leave for Osaka to care for his estranged, dying father, whom he hasn’t seen in 16 years. Therein hangs the tale.

And a multilayered tale of class, race, sex, death, and family history it is, shuttling between the stories of Mike and his father, Eiju, as they work together in Eiju’s modest neighborhood bar while trying both to acknowledge and ignore Eiju’s cancer and his quickly approaching death. Meanwhile, Benson and Mitsuko — whose contrasts of age, race, and gender are stark and often comical — begrudgingly form a semi-comfortable space of domesticity within their one-bedroom flat in Houston’s Third Ward.

The situational spark that begins the novel is contrived, or as Benson says, is like “some fucked-up rom-com,” yet the artifice soon becomes illuminating.

Washington finds eloquence in colloquialism; he creates, through a variety of voices, the poetics of conversation. Little turns of phrase — “the sun settles into a muddy purple. It’s still hot as shit. But not entirely unbearable” — create a storytelling centered within characters’ consciousness.

One doesn’t feel that this is writerly paint applied to the text but is instead the very germ of how the characters experience the world. In “Alief,” a story from Lot, the narrative is told through a collective “we” — a community’s account of an affair between two of its members. “We spoke as one. A single cry, and then another.” And later: “But you’d be stretching the truth to have called us friends, to call us anything other than what we were — just the neighborhood.”

This witness account of the affair gives form to a consciousness, and the account itself becomes the story. What was an isolated moment between a couple becomes a communal libretto, universal and explicit.

In Memorial, by alternating between the present and intrusions of memory, the author creates states of mind in Mike and Benson that become the novel’s central force. Eiju’s death is expected, but Mike’s reaction to it is intriguing. How will Mike mourn a father who, even while dying, still patronizes his son’s sexuality but now “dozed off in the middle of the day, grimacing himself awake”?

Washington’s clever use of subordinate clauses blends the past and present, pressing them against one another as if creating a photo album for the reader. The reader’s sense of the characters is deepened not from an articulation of one photograph but by Washington adding more images to the collection. Here is Benson observing Mitsuko:

“That evening, I catch Mitsuko sharing a mug of something with our Venezuelan neighbor. It’s one of the rare moments that I’ve seen the woman without her children. She and Mitsuko aren’t laughing or smiling or anything; they’re just drinking over the fence, silently, together. Every now and again, one of them looks up, like they’ve suddenly heard something. But they don’t say shit about it.”

Then, directly after this, Benson begins thinking of his relationship with Mike, explaining the “root of the problem, our problem: the night before Mike left, in bed, before we fucked, he asked if I thought we were working.” There is that playful fluctuating between “before Mike left” and “before they fucked.” The proximity of this moment to that of Mitsuko and the neighbor creates a resonance between the two — separate in time but together here.

Yet there are moments when the author’s hand weighs too heavily on a character’s diction and confuses, rather than clarifies, that character’s world. For example, when Benson describes the sitting posture of a preschooler as “some sort of performance piece.” This is an issue of voice. Washington isn’t writing from inside Benson’s head here; the comparison of the child to a performance piece is the author’s.

And Mike and Benson often narrate with indifference — one character is “built like a baker,” which conveys nothing to the reader — and scenes are sometimes introduced with a thrust of boredom: “The wedding reception is a wedding reception.”

But more often, Washington’s details contain a pathos that weeps below the lacerating irony: “There’s the thing that happens, and then there’s the shit that happens around it. They’re as important as the actual event…But then the moment passes. That reframes everything. If enough time’s gone by, you aren’t even the same person anymore. The event becomes history. Like, an event.”

Listening carefully, it is there that life rests: in the slow gathering of moments, some seemingly arbitrary, all clamoring for attention.