Manhattan Phoenix: The Great Fire of 1835 and the Emergence of Modern New York

This problematic history portrays Gotham as hell in more ways than one. 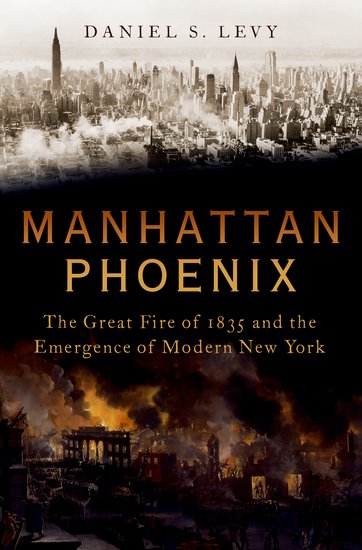 In Manhattan Phoenix: The Great Fire of 1835 and the Emergence of Modern New York, Daniel S. Levy accomplishes the impossible: making New York City entirely unappealing. In this quarter-century-spanning history — roughly between the disaster referenced in the title and the Civil War — New York is mostly portrayed as a place to catch infectious diseases, get beaten up by angry mobs, or die in a fire great or small.

Where’s the fun in Fun City?

Admittedly, Levy is trying to show the humble beginnings of today’s metropolis, and it’s true all big cities of the era suffered from the same miseries. But surely even in the dark days before clean water, professional police and fire departments, and Uber, there must have been something nice about living in Gotham, especially for the well-to-do residents Levy profiles. Weren’t there bracing autumns and uplifting springs? An exciting bustle on the street? A sense of possibility, purpose, and surprise in the air?

Not in this account. Instead, life in New York in the mid-19th century seemed exclusively to be a grim wait for the next fire. Even theaters are mentioned primarily to count how many times they burn down.

Relief only began when the city started piping in clean water from upstate. Remote access to pristine mountain springs curbed waterborne illnesses like cholera, and the new reservoir helped fire brigades more quickly douse conflagrations. Urban living also became healthier and more pleasant with the arrival of Central Park, which at the time of its construction was the largest public-works project in the country.

Despite its generally downbeat mood, the book is full of surprising tidbits about the nation’s largest city. For one, the territory north of 14th Street is laid out in a strict grid not only to facilitate development — then, as now, real estate was king — but also to help hook-and-ladder companies better maneuver to fight those never-ending blazes. Graves were often disturbed to make way for new construction. The Five Points section of Manhattan was so notorious for gang activity and general lawlessness that frontier hero Davy Crockett was afraid to venture there after dark. And Confederate saboteurs tried to cripple the industrial might of New York that was fueling Union success in the Civil War by, you guessed it, starting fires. (They failed.)

Something else important is missing besides municipal cheer: maps. It’s frustrating that a book about the changing topography of a city doesn’t include any. For those with little or no familiarity with the warren of streets at Manhattan’s southern tip, the addresses, intersections, and routes offered up in the text bring forth no mental images. The absence of maps undermines the whole purpose of the story, which presumably is to draw a picture in the reader’s mind of the growth of New York.

As part of the nation’s overdue reckoning with race, recent books on American history and culture tend to give more attention to the Black experience than they probably would have prior to 2020. Manhattan Phoenix is no exception, and it includes some disturbing revelations about New York’s racial past. The most violent is an event likely familiar to Civil War buffs: the draft riot of 1863, in which Blacks were the principal targets of whites outraged at being conscripted to fight slavery.

What casual students of the period might not know is how close commercial — specifically, cotton-industry — ties were between the city and the South and how those monetary bonds made many prominent Manhattanites apologists for the enslavement of fellow humans. In fact, its mayor in 1861, Fernando Wood, both defended slavery as necessary to New York’s prosperity and floated the idea of the city following the Confederacy into secession to keep the economic good times rolling.

(One bright spot among all these sobering revelations is the story of restaurateur Thomas Downing, an African American originally from Virginia who became Manhattan’s “Oyster King” and one of its wealthiest residents.)

The book is heavily sourced, with over 50 pages of endnotes and a seven-page selected bibliography. Unfortunately, its serviceable writing doesn’t live up to the standard of its research. An occasional phrase shines, such as when Levy describes the city as a stark contrast of “grinding poverty and great wealth, of grime and polish, of want and entitlement.” More commmon are distracting clunkers: a man miraculously writing in his journal while shaving; a “shield” wielded awkwardly “against the weaknesses of intemperance”; and “virtuousness” taking up space that could have been gracefully filled with “virtue.”

The idea that New York can emerge from the ashes of disaster bigger and better than ever is certainly reassuring. Covid-19 hasn’t destroyed the city’s manmade environment like fire once did, but it’s killed many more people and burned for two years instead of days. Manhattan Phoenix presents other enlightening comparisons between past and present. Like now, recessions halted real estate development; unlike now, inflation led to uprisings rather than mere grumbling. And votes back then were actually stolen as part of rough-and-tumble elections.

But the biggest change for most modern visitors to Gotham? Today, it would seem, New York is a place to be savored, not simply endured.