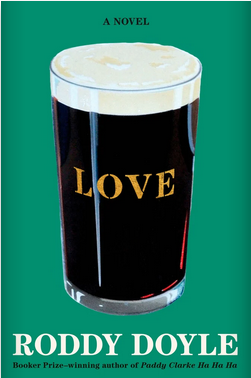 What’s not to like about a Roddy Doyle novel? And when it’s titled Love, it’s even more irresistible. But love doesn’t just hurt. Love, actually, is also a salacious infatuation — at least according to fiftyish Irish pub crawlers and old drinking mates Davy and Joe.

They meet up for what might be their last call to thrash over old times, to asseverate over the present, and to make presumptions about the future, both blustery blokes justifying the ways of man, to man.

But as much as the novel is about these two blighters, it’s also about the three women who define them: Davy’s wife, Faye; Joe’s wife, Trish; and, inevitably, the more influential Other Woman, Jessica.

Davy (and Faye) left their native Dublin ages ago for England. Joe remained. Davy occasionally returns to visit his father. That’s when the two chums reconnect and reminisce about their youth and their married lives.

Both harbor lifelong, festering secrets. This time, Davy’s visit is overshadowed by his Da’s fading health, while Joe confesses to a decades-old affection for Jessica that he’s finally acted upon.

Doyle doles out their baggage slowly. The narrative slides back and forth, from the present to the past, often in flashbacks that sometimes occur within a sentence or paragraph. This allows past memories to unfold, triggered by a recent encounter between Joe and Jessica, flooding the sloshed friends.

The pub culture permits the meandering plot to zigzag from one character to the other and to divulge information from pint to pint. Pubs are the “world of men. There were women, too. But the world — the pub — was made by men, put there for men. There were no women serving, no lounge girls, very few women sitting on the stools along the counters.”

Pubs’ décor features “photographs of men. Jockeys, footballers, men drinking, writers — all men — rebels, boxers,” and their space is dominated by stereotypically masculine furnishings, “[d]ark wood, old mirrors, smoke-drenched walls and ceilings.” The men feel at home in pubs, where, as is often the case in the men’s lives, “women were guests.”

The “real, hidden purpose” of streets that are “sometimes crowded, sometimes deserted” is to lead men like Davy and Joe to stools they’ve never sat on before but knew were theirs, to listen to voices they’ve never heard before but in which they recognize themselves. The “man with the suit and ponytail who read the New Statesmen [and] sat for hours at the bar.” Or the alcoholic who stands up and declares himself to the room.

That’s what happens to Davy and Joe when they enter George’s, the first of many pubs in Love. Named for the barkeep, it was the haunt of their youth, around the corner from the College of Music, where they first spotted Jessica, a girl with a cello.

Neither knew her name then, but Davy insists Joe was infatuated with her. Joe confesses that he has had salacious thoughts about her for almost 40 years and admits that, a year ago, he left Trish for Jessica after a chance encounter at a parent-teacher conference.

This surprising declaration at the start of the novel leads to pub after pub, to pint after pint. Davy feels as though he’s functioning as a “tape recorder,” letting Joe justify his “shadow life.”

Joe defends his decision to leave Trish and his children, convincing himself that finding Jessica again “had been like finding something he’d lost and would have given up on.”

The “indignities of ageing” have crept up on both men. But it’s Davy who suffers the final heartbreaking conclusion.

The 10-hour binge in Love leaves Davy and Joe hammered. But it leaves the reader with the feeling that love is complicated and simple at the same time.