Long Train Runnin’: Our Story of the Doobie Brothers

An affectionate oral history of a groundbreaking band. 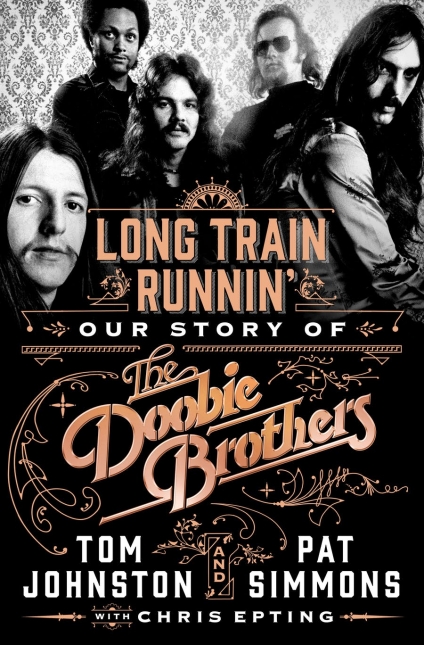 “Goddammit, man,” says Michael Douglas’ character in the Robert Zemeckis film “Romancing the Stone” as he catches up on the news from America. “The Doobie Brothers broke up.”

The Doobie Brothers occupy a sweetly nostalgic place in American pop-culture history. They set out at the close of the Woodstock era, part of a second generation of San Francisco bands that transformed the acid rock of Jefferson Airplane and the Grateful Dead into the slick, monetized stadium rock of Jefferson Starship and Journey.

But the Doobies always seemed a little more real than the rest. They rode with the Hell’s Angels, took their name from weed culture, and radiated a desperado lawlessness that honored their Haight-Ashbury forebears. “China Grove” and “Long Train Runnin’” were hit songs, but they were also hard-edged rock ‘n’ roll, the sort of music an easy rider might blast over the roar of a hog.

In Long Train Runnin’: Our Story of the Doobie Brothers, founding Doobies Tom Johnston and Pat Simmons deliver an affable oral history, their tag-team account leavened with other voices from across their half-century run. Read this book and you’ll feel like you spent an evening backstage with the band, passing a joint and hearing three or four competing versions of how it all went down. The stories might get repetitive, and the guys might disagree on who wrote the chorus to “Listen to the Music,” but that’s rock 'n' roll.

Johnston, the singer and songwriter behind most of the Doobies’ early hits, grew up in Visalia, in central California’s dusty interior. “My early inspirations were Little Richard, Jimmy Reed, and Bo Diddley,” he says. A few pages later, he adds, “My life changed when I saw James Brown and the Famous Flames.” That context helps explain the infectious rhythms that animate many Doobie Brothers songs.

He hung out at San Francisco’s famed Fillmore, watching the Electric Flag and Frank Zappa and Paul Butterfield and Cream. No less than legendary concert promoter Bill Graham busted him for smoking a joint, an episode that would inspire much mirth in later years. Around the same time, Graham busted Simmons, the Doobies’ eventual second singer and songwriter, for sneaking onstage at a Grateful Dead show. Clearly, the men were kindred spirits.

But the Doobies drew their greatest inspiration from Moby Grape, the brilliant, doomed San Francisco band that formed in 1966 as an offshoot of the Airplane. Anchored by Skip Spence, the original Airplane drummer, Moby Grape featured five musicians who wrote songs and sang, and three intertwined guitars. The Doobies modeled their sound on Moby Grape’s eponymous masterpiece album, a recording that probably resonated more with the band than with its fans.

The Doobies formed in 1970 and played raucous gigs in biker bars in the Santa Cruz Mountains. Major labels scouted them. Warner Brothers producer Ted Templeman signed them after hearing early versions of “Jesus Is Just Alright,” “Long Train Runnin’,” and “Rockin’ Down the Highway,” all future classics. The night of their meeting, Ted recalls, “Tommy and Pat were basically sharing cans of beans for dinner.”

The first record sold 10,000 copies. Things turned around with the second LP, Toulouse Street, which nearly cracked the Top 20 on the strength of Johnston’s joyous “Listen to the Music.” The next one, the Captain and Me, went double platinum, buoyed by “Long Train Runnin’” and “China Grove.” Soon, the Doobies traveled on their own jet. The band nearly died in that plane at least twice, first in a storm, and later when the pilot injudiciously handed the controls to Jeff “Skunk” Baxter, their mercurial guitarist.

After that first brace of hits and a lot of partying, Johnston ran out of steam. He failed to pen another monster hit on album number four, the aptly named What Were Once Vices Are Now Habits, an effort rescued by Simmons via his fingerpicked gem, “Black Water,” the band’s first number-one hit. Album number five, the excellent Stampede, scored its biggest hit with a Motown cover, “Take Me in Your Arms (Rock Me).”

Vexed by stomach problems, Johnston eased out of the band. And here’s where the Doobie Brothers story gets really interesting. Michael McDonald, a Steely Dan backup singer in his early 20s, joined the Doobies and revealed not just a rich and soulful tenor but serious R&B songwriting chops. He played one of his songs for a dubious Templeman.

“After a brief intro, he started singing, ‘You don’t know me but I’m your brother,’” Simmons writes. “Over Michael’s shoulder, so he could not see, Ted looked at me and mouthed the words, ‘Oh my God.’”

Two of McDonald’s songs charted big on his Doobie Brothers debut album, Takin’ It to the Streets. The title cut, a jazzy, gospel-inflected piano song, redefined the Doobies as a funky pop band even as it tugged the pop-music landscape in the direction of watery synth chords and warm sax solos. That song and McDonald’s other hit, “It Keeps You Runnin’,” sounded like the work of a very different band than the one that had recorded “China Grove.” Apart from the continued presence of Simmons, perhaps the only common thread was an ongoing aversion to the letter G.

The Doobie Brothers became a bigger act with McDonald than it had ever been with Johnston. Its magnum opus was “What a Fool Believes,” a mammoth 1979 hit penned by McDonald and Kenny Loggins. The song completed the band’s transformation into masters of smooth, danceable, rhythmic pop. A beautiful song delivering four minutes of sweet relief amid an aural onslaught of disco, “What a Fool Believes” perfected a syncopated style of electric piano and splashy synth that would adorn hundreds of lesser songs.

Johnston talks gamely of his alienation as McDonald’s lighter fare swept in to supplant his biker-bar rock. And McDonald speaks poignantly of his awkwardness in singing his own songs with a band he had worshipped from afar, until Takin’ It to the Streets came out and sold 300,000 copies on the first day.

Debate would rage for years on the relative merits of the old Doobie Brothers and the new one. Three decades on, most critics and fans seem to embrace both eras. “China Grove” and “Listen to the Music” are probably the definitive Doobies songs, but “What a Fool Believes” is a landmark late-1970s recording, and goodness knows what the Doobie Brothers might have become without Michael McDonald. The industry paid them the ultimate compliment in 2020, inducting them into the Rock & Roll Hall of Fame. Pretty good for a band named after reefer.