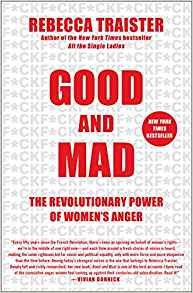 No matter your political leanings, there's a lot to be mad about as a woman navigating America in 2018. But wasn’t there always?

At the start of the 20th century, women had to fight for the vote, and even when that right was granted, black women were still rendered powerless at the polls due to Jim Crow laws that lasted more than 50 years beyond the ratification of the 20th Amendment.

And how about as a working woman, in the years both before and after the term “sexual harassment” was used for the first time in public? (That wasn’t until 1975.)

Never mind only two years ago, when tapes of soon-to-be President Trump bragging about grabbing women “by the pussy” were released publicly.

What’s happening now is not that there’s more to be mad about, or that there are more women who are angry. It’s that women are embracing that anger in big, public ways — and demanding society listen.

That’s the premise of Rebecca Traister’s new book, Good and Mad: The Revolutionary Power of Women’s Anger. Traister is a well-known feminist writer, whose 2016 All the Single Ladies documented the rising number of unmarried women in America.

Good and Mad provides an historic analysis — and, more importantly, a celebration (hence the “good” in the title) — of the moments when women’s anger boiled most hotly, and how the media and the men around them reacted when it did.

It describes how, for the past 200 years, women have used their rage as a political tool, wielding it strategically in order to demand better treatment. And it advocates for the power of women’s anger as something not to be suppressed, but rather harnessed.

“Progress in America takes a punishingly long time; but it also happens in fits and bursts, sometimes in reaction to terrible, deadening, deeply damaging setbacks,” Traister writes. “We are in one of those moments now, and we need to pay attention, to be aware of what is possible if we think hard about what we’re angry about, and what needs to change.”

Good and Mad is compelling because it feels so right now. In fact, I’d recommend reading it right now. Not because it is such a great book that you need to stop what you’re doing and pick it up immediately, but because it is so highly relevant to what’s currently happening in the U.S.

Traister makes reference to this right now-ness of her work in the conclusion, when she writes of how she adjusted her timeline for the book’s completion:

“In the fall of 2017, as the wildfire of female fury was spreading, it had become clear that I needed to work swiftly, to capture this rebellion before its sharp, spiky contours got retroactively smoothed and flattened by time.”

If you’re a woman, this book helps contextualize the rage you’re very likely feeling deep in your bones with each searing new headline about men in power disrespecting women, with zero consequences. If you’re a man, it will help you understand and respond to that anger. If you’re not sure why women seem so darn upset (what’s all the fuss about?), then you really need to read this book.

I finished it thinking about the Women’s March, the 2016 election, and #MeToo in new ways. And it’s clear that those flashpoints of female rage will continue to boil over. (In recent op-eds, Traister broke down both Serena Williams’ being penalized for showing rage at the U.S. Open and the outpouring of female fury surrounding the Senate hearings of Brett Kavanaugh and Christine Blasey Ford.)

Of course, not all women identify with the rage Traister writes about. Her answer to the question, “What about white women?” has stuck with me in the days since I finished Good and Mad.

White women, she writes, “have been offered a kind of proximal power: greater access, via their relation to white men, to wealth, jobs, educational opportunities, housing, and health-care options.” And, so, they have an incentive to keep those men in power.

In Good and Mad, Rebecca Traister takes moments of rage that burn so blazingly hot they’re blinding and grounds them in history and analysis. It’s a reminder that what’s happening now builds upon centuries of anger, and there are likely centuries more to come. The book isn’t a plea to shy away from that anger, but rather a toolkit for what to do with it.

Avery J.C. Kleinman is a writer and audio producer living in Washington, DC. Follow her on Twitter at @averyjck.