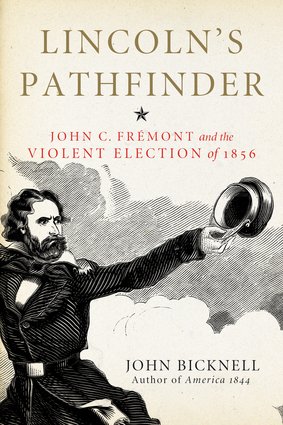 John Bicknell’s new book is not only the best book on the 1856 U.S. presidential election; it is really the only book on this interesting, important election.

The 1856 election was contested amidst threats of civil war, and it featured two new parties: the Republican Party, opposed to the extension of slavery beyond the states where it already existed; and the American or Know Nothing Party, opposed to immigration and what the more ardent Know Nothings saw as the improper influence of the Catholic Church on American politics. Both parties, and other less successful groups, emerged as the Whig Party collapsed and disappeared, unable to bridge the gap between North and South.

There were three major candidates in 1856: James Buchanan for the Democrats, the California explorer John Frémont for the Republicans, and the former president Millard Fillmore for the American Party.

One of the main arguments for the American Party was that the other two parties were sectional; there were no Republicans in the South, and the Democrats were effectively the Southern party because they were dominated by Southerners. Vote for the American Party, the argument ran, because either of the other two will lead us to civil war. The Know Nothings were right, in a way, although one doubts that Millard Fillmore would have saved us from civil war.

As his title, Lincoln’s Pathfinder, suggests, Bicknell focuses on Frémont and especially his wife, Jessie Benton Frémont, “much more politically savvy than her husband.” Jessie’s role was not to give speeches — there were very few women who would do that in 1856 — but she was the campaign’s lead strategist. And there were other women involved in the campaign, including Anna Ella Carroll, who wrote strident campaign literature for the American Party.

Bicknell does a fine job of relating how each of the candidates secured his nomination. Bicknell is a journalist, and he treats the conventions and the campaigns with a reporter’s eye.

Describing the Republican convention, for example, Bicknell writes: “On June 18, a steamy day with a slow and steady rain, the platform committee, headed by David Wilmot of Pennsylvania, handed in its product.”

Describing Frémont’s role in Lincoln’s election, Bicknell quotes John Bigelow: “A wedge may be useful in splitting a log but useless in converting either of its parts into a chest of drawers.” Frémont, according to Bicknell, “split the log in 1856. The Railsplitter would build the chest of drawers.”

This is not, in short, a dense, academic book; it is a readable, lively one.

Bicknell takes the reader on some interesting detours, exploring other events of 1856. This was the year in which hundreds of Mormons, fleeing violence, pushed handcarts across the Great Plains towards Utah. Many perished.

This was the year in which several San Francisco leaders, tired of what they saw as weak police and slow courts, formed a vigilance committee, seized several prisoners, “tried” them on murder charges, and hanged them.

This was the year in which a South Carolina member of Congress used a walking cane to beat and nearly kill Senator Charles Sumner — on the floor of the United States Senate. And, in response, John Brown and his sons roused innocent settlers from their sleep in Kansas and hacked them to death. “The mutilated bodies,” Bicknell writes, “the rage with which the killings took place, sent the message Brown wanted to send: the sins of this land would be purged with blood.”

The one flaw in this book is that Bicknell did not make any use of manuscript sources. On the Democratic side, for example, one of the key players was S.L.M. Barlow. There are boxes and boxes of Barlow papers at the Huntington Library — surely they have some interesting information about the 1856 campaign.

Overall, however, this is a fine book, well worth taking along on a summer vacation.

Walter Stahr, formerly a Washington lawyer, is the author of biographies of John Jay, William Henry Seward, and a new biography of Edwin Stanton, coming from Simon & Schuster in August.

The History and Uncertain Future of Handwriting

This detailed account of a dying art is too quick to dismiss our most personalized form of communication.