This taut page-turner captures the contradictions and complexities of the post-WWII German capital. 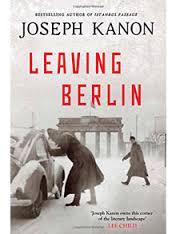 In his latest fast-paced thriller, Leaving Berlin, Joseph Kanon explores an exciting, fear-filled time. The constant drone of airlifts bringing scarce supplies to the isolated city devastated by World War II is the background music for beleaguered lives. The experiment of a Soviet Germany in which one authoritarian regime supplants another has everyone looking over his or her shoulder. Old loyalties — and old identities — give way to new or faked ones.

Kanon’s central figure is Jewish writer Alex Meier, who, as a young man with a blooming reputation, had left Germany for the United States ahead of the war. Now, in 1949, he returns under complex circumstances.

Meier has made a bargain with the devil. The House Un-American Activities Committee (“McCarthy”) threatened to deport him, an uncooperative German socialist, making his return impossible and his separation from his young son permanent. However, Alex reached a deal with the newly established CIA to provide information in exchange for a return to the U.S. A native Berliner with many connections, he is at once at home and in exile. Everything is changing as communist rule reshapes the culture.

Something of a celebrity, Alex mixes with such returned notables as Bertolt Brecht while finding his assignment as a CIA agent upsetting to his moral compass.

In the book’s most dazzling extended scene, Kanon recreates an actual historical event, the second major production of Brecht’s anti-fascist play “Mother Courage.” Spun around the anxiety of the performance and the political liabilities inherent in Brecht’s work is an intricate display of spy craft and chase action. Alex uses the cover of the production to smuggle an ill friend, Erich, the younger brother of his former lover, onto an airlift.

Erich, an escapee from a forced-work brigade in the Soviet uranium mines, is on his way to hospitalization and freedom. Getting his story told is one of Alex’s anti-Soviet projects formulated to solidify leverage with his CIA handlers.

Leaving Berlin is also a depressing love story. Alex’s return to Berlin brings him back into contact with his first and only true love, Irene, a woman whose needs are as immense as her seductive personality. After a while, Alex discovers that Irene is the principal target of his handlers’ investigation. With this realization, the issues of loyalty and betrayal intensify and threaten to spin out of control.

Kanon’s portrait of postwar (and Cold War) Berlin is a splendid achievement. The city itself becomes a character, not only as a physical entity with its shattered neighborhoods, remnants of grace and sophistication, and network of roadways, but also as a moody, despairing personality grasping at hope and bluffing confidence.

In the “Mother Courage” section and elsewhere, Kanon’s descriptions are gorgeously cinematic. Having had one of his novels, The Good German, turned into a movie, he might not be surprised to find film executives interested in taking on his latest title. It seems destined for the big screen.

Kanon also creates dialogue that is at once stylized and unusually realistic. Characters frequently drop words at the end of sentences. This is not because they are interrupted, but because that’s actually how people talk — we’re just not used to seeing such dialogue in print. Context and familiarity with the other person allows the dropped word — the preposition without its object — to register without being there. On occasion, the dropped word is a natural hesitation or a shift in direction of the speaker’s thoughts. Such exchanges amplify our sense of a collective hesitancy born of people’s uncertain footing in a new, unsettled social environment.

Though Kanon’s third-person narrator and carefully crafted dialogue convey enormous amounts of information, the expository function of the dialogue feels incomplete. Do you ever walk into a situation in which everyone knows what’s going on except you? It’s something like that. Every word and sentence is crystal clear, yet the context and import remain undefined.

This, too, I believe, is a stylistic device shaped to express uncertainty — what living in Berlin at this time feels like. Readers feel the overwhelming pressure of facts that don’t mesh. At first, such stylistic risks might seem annoying, but soon one becomes indoctrinated into Kanon’s language milieu. The pieces fit more and more easily. It’s like standing back from a busy montage to perceive the pattern.

Reading Joseph Kanon was a new — and, indeed, captivating — experience for this resolute but often jaded reviewer. It is easy to understand the plaudits his work has received. Story, suspense, substance, and style are inextricably linked in a work that masterfully exploits and exquisitely transcends spy-genre possibilities.

We Shall Not All Sleep: A Novel