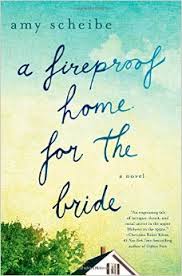 A novel that is a coming-of-age story, a love story, and a crime story filled with family secrets and disturbing attitudes about race, religion, sexuality, and gender sounds terribly complicated, but in A Fireproof Home for the Bride, author Amy Scheibe maintains control over the tightly woven story.

Readers experience the tale through the courageous main character, Emmy Nelson, as she breaks through the confines of her narrowly proscribed life at a time when Americans were experiencing the early stages of what would become the cultural upheaval of the 1960s.

The novel, set in the Fargo-Moorhead region of Minnesota and North Dakota, begins in the icy Midwest winter, when Emmy, an 18-year-old whose life has been preordained to include marriage to an older neighbor her parents have chosen, the Lutheran church, and living forever on the bleak family farm, starts to feel inklings of trepidation about her future.

Although it’s the 1950s, the story, in its early phases, feels more like the 1800s because of the Nelsons’ and their neighbors’ attitudes and the claustrophobic way in which they all live. The occasional reference to period music and slang, such as “I’m as serious as a heart attack,” reminds readers of the post-World War II world in which Emmy actually exists.

Emmy’s doubts about her impending marriage increase once she meets Bobby Doyle, an ambitious Catholic from a wealthy family. Scheibe’s evocative phrasing perfectly describes Emmy’s feelings when Bobby whispers to her that he will find her, “a moment so perfect that Emmy tried hard to suspend herself within it.” Moments later, Scheibe writes, “She walked briskly up the street, toward the cold reality of her foreseeable future.”

Emmy’s growth as a character builds as she experiences shocking violence and becomes aware of the prevalence of racism, intolerance of Jews and Catholics, and tolerance for abuse against women. While the novel is set in the past, many of Emmy’s concerns revolve around still-unresolved societal issues. But Scheibe’s story avoids becoming a polemic.

The pace of the novel quickens as Emmy begins working in the newsroom of the Fargo Forum, strengthens her resolve to become independent, and deepens her relationship with some of the novel’s heroes and heroines, including her great-aunt Josephine, her cousin Dot, newsman Jim, and her own father, Christian. Emmy’s newfound freedom and drive, along with an accelerated tempo of plot complications, keep the novel exciting to the last page, if occasionally a little beyond believability.

While Emmy and many of the “good guys” in the book are well developed, one of the few flaws in Scheibe’s writing is the one-dimensional nature of the “bad guy” characters. For example, Emmy’s ice-cold mother, Karin, remains as frozen and distant to readers as she does to her daughter. Mr. Davidson, a sinister individual with inordinate influence over some of Emmy’s relatives, her former fiancé, and others in the town, is a cartoonish evil presence rather than a flawed human being. Emmy’s sister Birdie, a victim rather than a villain, also remains flat.

However, Scheibe’s plot twists and turns of phrase redeem the book, such as when she writes, “‘Then you can find a new place to live,’ Karin said, as though she had already packed Emmy’s bags and left them on the stoop of her disappointment.”

And Emmy’s father, a mostly silent farmer who eventually reveals his admiration for his daughter’s grit and wisdom, becomes one of the more interesting characters as the book progresses.

Readers who enjoy historical fiction and delving into the emotional interior of people’s lives will appreciate Scheibe’s novel. Those who like their fiction neatly resolved will enjoy it, too, since, in spite of its sometimes convoluted nature, each thread of the story is knotted together by the last page.

Michele Lerner, a Washington, DC-based freelance journalist, writes about real estate and personal finance for publications and websites such as the Washington Post, Bankrate, New Home Source, and Realtor.com. She is the author of New Home 101: A Guide to Buying and Building a New Home, HOMEBUYING: Tough Times, First Time, Anytime, and, someday, a collection of short stories. Follow her on Twitter at @MVLerner.