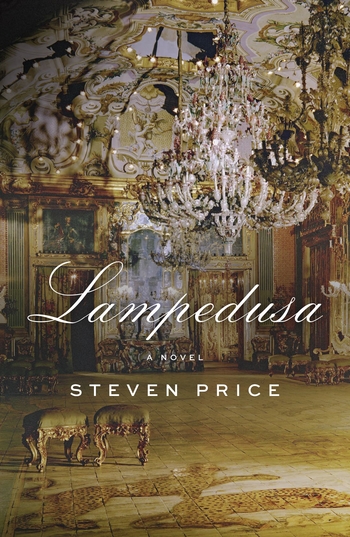 In Lampedusa, Steven Price creates a literary Matryoshka doll: A novel about writing a novel. Not just any novel, but Giuseppe di Lampedusa’s classic of 19th-century Sicily, The Leopard.

Lampedusa’s career calls out to aspiring-yet-unsuccessful writers who vow their true greatness will be recognized someday, if only after death. Lampedusa wrote only the one novel and never saw it in print. Since its publication in 1957, it has sold more than 3 million copies and inspired a film starring Burt Lancaster.

Lampedusa the novel succeeds on many levels, despite the inevitable comparisons with Lampedusa’s brilliant elegy on a Sicilian nobleman’s way of life. Not the least of the new novel’s achievements will be to inspire readers to open Lampedusa’s novel, even for a second time.

Don Fabrizio, the Prince of Salina and the hero of The Leopard, confronts the Italian Risorgimiento of the early 1860s, when Garibaldi finally goads the disparate states of the Italian Peninsula into a single nation.

Don Fabrizio (the Leopard) knows that his class is doomed, and probably should be. He cares little for financial affairs due to his “contemptuous indifference about matters he considered low, though deep down this attitude was really due to laziness.”

Forced to spend time with an upwardly mobile local dignitary, Don Fabrizio despairs that the man is wearing the wrong suit, and that it’s wretchedly tailored. With a wink, the Leopard acknowledges the ascension of this arriviste by assuring a high official that the man’s “family, I am told, is an old one, or soon will be.”

Yet the Leopard’s bewitching aphorisms and invincible melancholy help us past his snobbery. Sicilians, Don Fabrizio tells us, are uninterested in self-improvement “for the simple reason that they think themselves perfect.” The Sicilian is equally indifferent to how well things are done, he adds, because “the sin which we Sicilians never forgive is simply that of ‘doing’ at all.”

Don Fabrizio portrays himself as one of “an unfortunate generation, swung between the old world and the new.” Lovers, he reminds himself, “want to be alone, or at least with strangers; never with older people, or worst of all with relatives.” Of the latter group, he has pronounced, “Every time one sees a relative one finds a thorn.” And of love? “Flames for a year, ashes for thirty.” Anticipating death, he concludes that “nothing could be decently hated except eternity.”

Yet it is Don Fabrizio’s dashing and much-loved nephew who speaks the famous line that distills The Leopard’s message: “If we want things to stay as they are…things will have to change.” Don Fabrizio must endure change while knowing that if his class “were to vanish, an equivalent one would be formed straight away with the same qualities and the same defects.”

Writing three generations later, Giuseppe di Lampedusa also was an Italian nobleman, but one who lived in ruins. By the 1950s, the Sicilian aristocracy had literally been bombed out of existence, the Lampedusa palace leveled by an American air raid in 1943. Lampedusa extends the metaphor to the novelist, who “had become like the great bombed-out houses of old Palermo, rubbled by history, an embarrassing reminder, best left boarded up and walked past.”

After a lifetime of reading literature and earning no money, Lampedusa is diagnosed with emphysema. He retreats into denial, concealing the diagnosis from his wife and continuing to smoke because he is “not prepared to live as a man with an illness, a man who carried his death in his pocket.”

Where Don Fabrizio vigorously schemed with local dignitaries, hunted, lusted after women, and mourned the passing of his world, Price’s Lampedusa is quiet and intellectual, relentlessly introspective.

Lampedusa’s marriage to a psychoanalyst is a much more layered and complex relationship than his fictional hero could have managed, or been bothered to pursue, with its pale sensuality. A damaged and manipulative mother, combined with horrific World War I experiences, render Lampedusa passive, a man who “liked being no one.”

His life comes to revolve around writing his novel. Lampedusa explores the creative act, with the novelist exulting that “the story came almost ready-made, as if certain of itself, as if he were both writing it and being written by it.”

Writing brightens Lampedusa’s world, which becomes “more intense, more alive than he had remembered.” His imagination has given him Don Fabrizio, who gives him life in return, but only as illness begins to take that new life away.

Price creates parallels between the two stories: Each hero dotes on a much-loved young man, ultimately adopted. Both protagonists journey into the Sicilian countryside in search of themselves. Both have a dog. And both end in deaths that are pitilessly portrayed from the vantage point of the dying person, each enduring a kaleidoscope of misery and regret and memory.

Lampedusa’s restrained tone gives the story the enchanted feel of a fable, though that tone belies the audacity of Price’s undertaking: imagining the imagination of a great writer, peering into why and how he writes. It is a fascinating journey.

David O. Stewart is the author of three historical novels, including The Lincoln Deception, and four works of history.