Kingdom of Lies: Unnerving Adventures in the World of Cybercrime

A befuddling, fragmentary plunge into the realm of computer criminals. 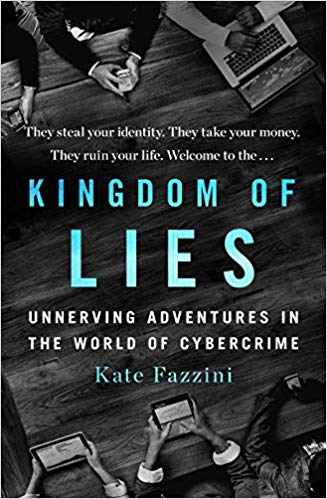 Given the dispiriting news these last two years of widespread computer hacking, cybercrime, and election manipulation, what politically savy reader doesn’t want to learn about these topics from an acknowledged expert?

Kate Fazzini, the cybersecurity reporter for CNBC and a former vice president in cybersecurity operations at JPMorgan Chase, is one such authority. It’s reasonable to expect this author to offer an engaging download from this timely battlefield. And Kingdom of Lies begins with the promise of a deep dive into the cybersecurity realm, most notably into the hacking of big-bank databases and so-called “ransomware” schemes.

The latter is a burgeoning subsidiary in the cybercrime economy. As Fazzini tells the tale, ransomware practitioners invade computer networks, both personal and institutional, and lock down the data managed by these systems. These incursions, when successful, can be catastrophic, rendering their victims’ data inaccessible.

In a techie variant on the “pay up or you’ll never see your husband/wife/kid again” trope, they demand payment from the infected parties for the release, unharmed, of the captive data.

In the most rudimentary ransomware capers, black-hats (i.e., hackers with criminal or destructive aims) use the internet mainly to target individuals or small businesses. But small-scale users have an edge here, at minimal cost: Inexpensive computer-security packages — one or more of which are likely protecting your own PC or Mac as you read this — keep pace with elementary system-cracking attacks from the dark side and choke off most invading malware before it can take root.

But this level of attack is small potatoes for savvy black-hats. More technically adept cybercriminals (some of them state-supported and/or working in gangs) unleash immensely more complex malware on large corporations and institutions. The ransoms they demand can run into the millions, usually payable in untraceable bitcoin or other cybercurrencies.

These incursions can require massive system resources — and stunning outlays of personnel hours —  to unwind and kill. So, to avoid enormously expensive technical remediation and the opportunity costs of disruptions to everyday operations, institutional victims of these forays often pay off the unknown invaders and hope the attackers will, as promised, withdraw their malware and fade back into the dark web.

This is the big-picture background — detailed, substantive, and compelling — behind the “adventures” the author describes. Regrettably, she leaves the sweeping technical backdrop for the reader to piece together from fragmentary chunks of technical exposition.

Instead, the author bounces along impressionistically, incessantly delving into the personalities and actions of key players on both sides of the cybercrime battle lines. Attempting a jaunty tack into personality journalism, she focuses on the unfolding, but not quite interlocking, stories of more than a dozen pseudonymous characters, all (presumably) sources she’s relied on in her years of reporting.

This puzzling, bottom-up angle creates a shaky balance for the reader. Real-world background, spottily parceled out, gasps under the weight of aimless snippets that are quasi-novelistic and all too often embarrassingly mundane. Consider this vignette depicting an interaction at a Romanian ransomware startup:

Sig realizes that he no longer has control of the situation. He doesn’t like this. He smiles at René, a big, sincere grin. She flashes one back, tipsy as she is, for a beat too long.

He’s so handsome, she thinks, as a Guns N’ Roses song comes on. “Welcome to the Jungle.” Such a good smile he has.

Such nice teeth, she thinks.

The individual stories never satisfactorily connect, leaving several disjunct narrative streams hanging. The absence of editorial discipline, from both author and publisher, is clear. The book reads like an extended, and incomplete, treatment for a proposed novel, rather than book-length journalism.

This near-field focus, rather than imparting a real-world sheen to Kingdom of Lies, makes it a befuddling read. In a nutshell, Kingdom of Lies falls far short of the expectations Fazzini’s impressive credentials seem to promise.