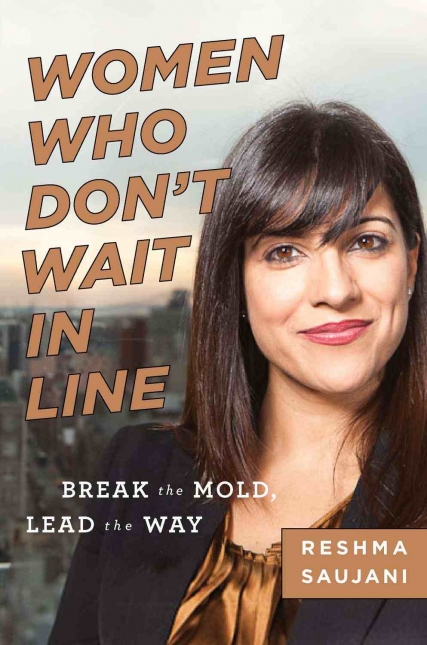 Most people write how-to manuals after reaching the pinnacle of their success: rising to CEO, landing the billion-dollar contract, becoming a household name. For Reshma Saujani, losing her 2010 Congressional race prompted a poignant inquiry into steps women should take in pursuing leadership roles — and an attempt to build a “new model” of female leadership.

Women Who Don’t Wait In Line begins the day after Saujani’s loss, and the details are all too vivid. In a memorable opening passage, she describes the crippling humiliation of awakening in a hotel room surrounded by unopened bottles of champagne, amidst the detritus of an abandoned campaign. After the requisite day of mourning alone in a dark bedroom, Saujani summons the will to read the masses of emails on her BlackBerry, and is surprised to find them encouraging, even congratulatory, regarding what her supporters consider is just the beginning of her political career.

The first lesson Saujani introduces, as a result, is “Fail fast, fail first, fail hard.” She notes that women are less likely to take risks, to nominate themselves for positions for which they may not be fully qualified, whereas men do it all the time and learn on the job. Saujani makes a good point regarding the importance of women learning by doing and not being afraid to stumble, although she slightly undercuts the message of taking risks with a query about whether the financial crisis would have occurred if women had run Wall Street, noting that women’s risk-averse investment portfolios generally outperform men’s. Saujani’s advice for women to “throw a failure party” with trusted colleagues and friends to talk about what went wrong, however, is a great idea.

Saujani’s remaining pillars of female leadership include strictures such as “Don’t Worry If They Don’t Like You,” “Follow Your Bliss” and “Be Authentic.” The common theme of her directives: be “Unapologetically Ambitious.” Saujani’s discussion of how ambition is used as a pejorative when applied to women reminds me of a “30 Rock” episode, where Jack Donaghy says “I like a woman with ambition — it’s like seeing a dog wearing clothes.” Jokes aside, the criticism rings true. Saujani details how the press used the word “ambitious” as a weapon against her during her campaign, and notes the ongoing charge of ambition against Hillary Clinton. When combined with a later anecdote from Mika Brzezinski about learning the hard way how to balance her ambition with spending time with her children, Saujani’s message is powerful: women should never apologize for being aggressively ambitious or for demanding help in balancing work and the home front.

Saujani also makes an important point regarding women competing with each other, drawing on her own experience of being told to “wait her turn” when she initially announced her run against Democratic incumbent Carolyn Mooney. The crucial takeaway, which Saujani hammers home, is that women are not competing for a finite number of positions — just like men, they should be aiming for every position, and the best candidate should win, period. There must be room for women to compete fairly and constructively against each other without provoking infighting.

Saujani’s account is filled with anecdotes from successful women to illustrate her advice, including Brzezinski, Katie Stanton of Twitter, Susan Lyne of Gilt Groupe and Randi Zuckerberg of Facebook. At times, however, Saujani’s points would be more effective if she presented her personal journey in a more chronological narrative rather than referencing it in fits and starts. Additionally, some of the advice can be confusing when taken in combination; early in the book she emphasizes the need to be assertive and tough like men, but she follows that with an admonition to “be authentic.” When Saujani is being assertive, she says, it means she is being herself. But there is no “one size fits all” model for leadership, and women who may not “authentically” be as vocally assertive or argumentative as some men may nevertheless be effective leaders. They just need to find ways to highlight their other leadership traits, an idea that Saujani also espouses.

Saujani also spends some time equating “being authentic” with a woman’s right to wear whatever she wants and still be taken seriously, which will raise at least one objection from men reading this book. In many fields, but particularly business, men’s dress codes prescribe dark suits and plain or pastel collared shirts, if not ties. Women are discouraged from wearing flashy stilettos in meetings, but men often can’t wear blue patent shoes or cartoon ties either. Saujani’s point that women should not have to disguise their sexuality is well taken, as is the argument that Michelle Obama’s bare arms do not inhibit her ability to do her job well. But while this argument may call into question the efficacy of professional dress codes, such codes are not clearly gender-biased.

Saujani follows much of her own advice, serving as New York City’s Deputy Public Advocate after her Congressional loss, and founding a nonprofit organization entitled Girls Who Code, which assists underprivileged girls who aim for careers in the all-important STEM fields. Her ideas about how women can better form a “sisterhood” include mentoring, helping female immigrants and lobbying for affordable national childcare — a concept few working mothers would oppose. Saujani’s advice seems more applicable to situations faced by well-educated women in professional fields, but she does point out lessons that would benefit lower income women or recent immigrants. While some of Saujani’s guidelines for leadership have been discussed before by women like Anne-Marie Slaughter and Sheryl Sandberg, there is no question that they are timely and bear repeating.

Perhaps the most distinctive touch, and one with which many minority women will identify, consists of Saujani’s references to her loving but critical Indian father, who makes lists of her mistakes and encourages her to make friends who will criticize her in order to become a more effective leader. “Tiger parenting” is common to many immigrant cultures in the United States, and Saujani’s anecdotes add the dimension of the pressures faced by minority women to succeed. This unique perspective on the emerging truths of women’s leadership makes Saujani’s book engaging and thought-provoking for women looking to lead in any field.

Alka Pradhan is a human rights lawyer based in Washington, DC. She has written numerous articles on international law and national security topics, but enjoys reading (and subsequently debating) anything and everything.

Kings and Presidents: Saudi Arabia and the United States Since FDR

A Castle in Wartime