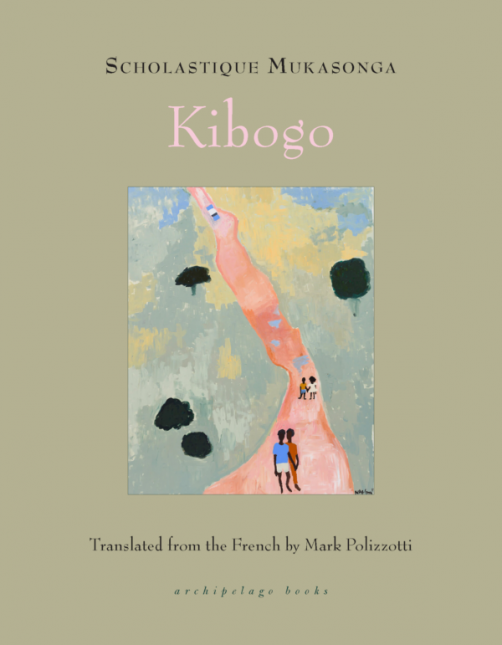 Since the publication of her first memoir in 2006, Scholastique Mukasonga has focused her work primarily on her country of birth, Rwanda, and particularly on the early pogroms and eventual genocide against the Tutsi. Her latest book, Kibogo, digs further into the past to highlight the dual oppression of colonization and evangelism, two forces that operated in tandem to subjugate people in what was then known as Ruanda-Urundi, a colonial territory that was originally part of German East Africa but was controlled by Belgium from 1916 to 1962.

Set in the 1940s, the novella is organized in four sections, the first of which is entitled “Ruzagayura” (literally, “search and find little”), as the great famine of 1943-1944 is called. While ostensibly due to a drought, the famine was greatly aggravated by Belgian colonizers, who diverted manpower to exploit iron and copper for weapons to be used in World War II, and who forced the population to grow crops destined to fail. In addition to describing the famine and the powerful rainstorm that finally brought an end to it, this first part focuses on a mythical figure named Kibogo, who was believed to have conjured up the lifesaving rain from the top of nearby Mount Runani.

In the second section, “Akayezu,” we get to know Akayezu, a Rwandan priest who tries to reconcile the white man’s religion with the realities of Rwandan life and is eventually expelled by the seminary when he mysteriously brings back to life a newborn who “gave no sign of breathing.”

This is followed by “Mukamwezi,” which tells the story of Mukamwezi, the bride of Kibogo and now an old woman — “the pagan, the witch, the scourge of the hillside” — who teams up with Akayezu to conjure up Kibogo to combat the drought.

In the final section, “Kibogo,” two old men and a group of boys tell different versions of the story of Kibogo to a white anthropologist who specializes in the study of cultures that practice human sacrifice. To please their distinguished visitor, they let him believe such sacrifices occurred in the area, and he asks to visit the mountaintop in search of the evidence.

All four parts of Mukasonga’s novella overlap, retelling the same tale from different perspectives and with unique details. The three main characters of Kibogo, Akayezu, and Mukamwezi appear in each one, with additional secondary characters and their asides, as well as tales told by the community and the missionaries, layering story upon story.

“You need stories for every kind of ear,” says one of the old men, and Kibogo raises interesting questions about the tales we tell each other and how the same story can vary according to the vantage point of the protagonist, the storyteller’s upbringing and biases, and the audience the storyteller is seeking to entertain.

While this style of layering multiple versions of the same narrative — leaving the reader to guess what actually happened — may be too figurative and ambiguous for some Western readers, it does successfully evoke an intimate tone. Throughout Kibogo, the reader has a sense of sitting fireside and listening to an array of animated performers. Slightly disruptive to the experience is the fact that readers may have to look up references and words they don’t recognize in order to keep up. A glossary of Kinyarwanda terms would have been helpful in this regard, since not all of them can be guessed from the context.

Still, the reader doesn’t need to understand every word, know exactly who or what Kibogo is, or be certain of what ultimately happened to Akayezu and Mukamwezi to recognize the very real, dark forces underpinning the book. There may be a lot of tall tales in Kibogo, but there are others we know to be true: the exploitation of Rwanda by the white man during colonialism and beyond, and the battle between the white man’s religion and Rwandan culture and beliefs. It is these truths that remain on our minds long after the fire dies down and the storytelling is done.

One Hundred Names: A Novel

A journalist attempts the impossible: to find a connection among 100 people.